Protesters express frustration about disruptions in the park 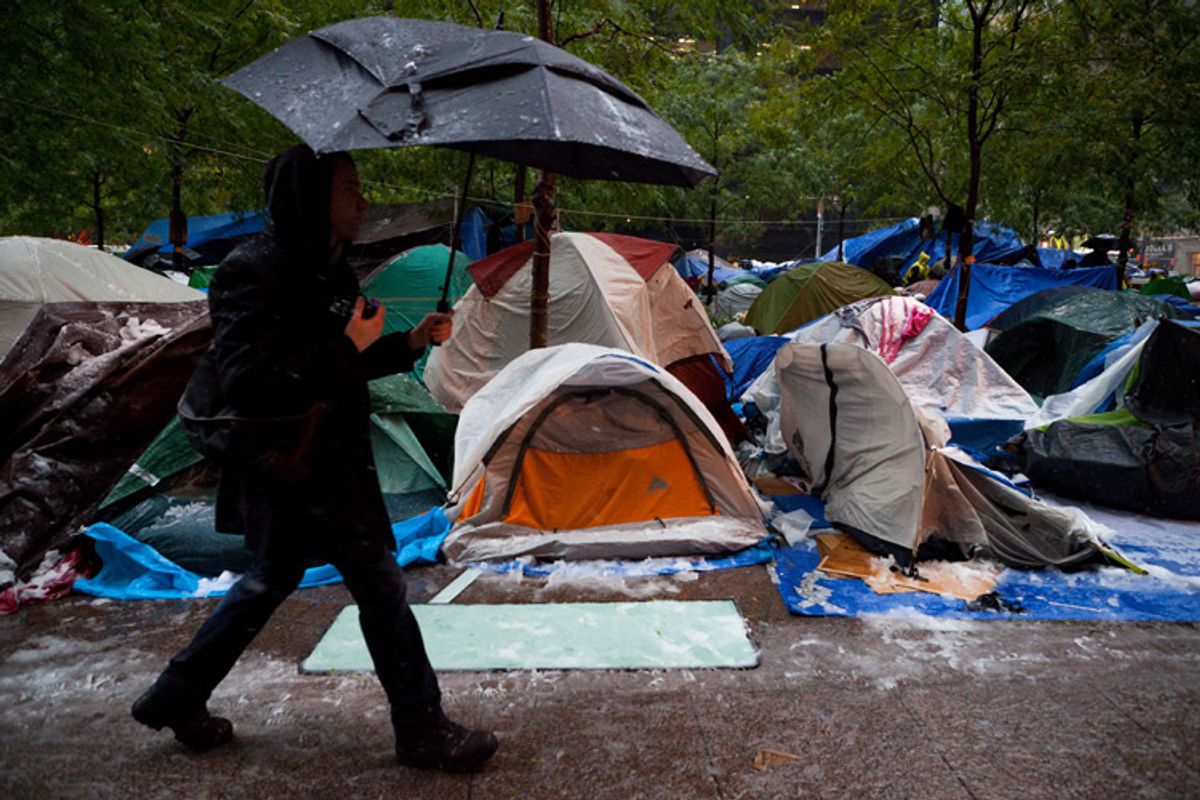 Are physical occupations a sustainable tactic for Occupy Wall Street?

There are signs in New York and around the country that life in public parks and plazas is presenting unexpected difficulties for the economic justice protesters. Chief among them is security, and particularly the attraction of disruptive people to Occupy sites who have no interest in the movement.

"It's gotten really bad in the last couple weeks, the population of criminals and predators. Fully half the camp down there now don't have anything to do with the movement. They don't go on marches. They're just down there to eat and cause trouble," says Fetzer Mills Jr., a 51-year-old from Memphis who has been working on the Occupy security team at Zuccotti Park in lower Manhattan. "We are overwhelmed."

I ask Mills what the security team can do when there's some kind of disruption, given that Zuccotti is a public space. "We can't do anything. We're totally powerless. All we can do is walk up and talk to them. And the police  will not come in there to do things," he says.

Mills' account broadly matches an observation made by the Daily News on Sunday:

The number of non-participants taking advantage of the resources that the activists have provided — free food, clothing, tarps and sleeping bags, hand-rolled smokes and even books, not to mention a sense of protection from the police, who have increasingly left the park to protect itself - has exploded over the past week, and is threatening to define the occupation itself and overshadow its political and social ambitions. Despite those resources, “spanging” (spare-changing, or panhandling) at Zuccotti has become commonplace, as have fights, near-fights and open-air drug sales.

Some of those people were allegedly encouraged to go to Zuccotti by the NYPD, a charge the department denies.

The Times, meanwhile, has a story on homeless people -- including those with mental disorders and with no interest in Occupy Wall Street -- making a home at the occupations:

“There are a lot of them here that have mental problems and that need help. They are in the wrong place,” said Jessica Anderson, 22, who is herself homeless, sitting with friends on a tarp at the Los Angeles site. “They have been creating more problems. There was one guy who showed up last night and he would not shut up: Saying all kinds of crazy stuff all night.”

Many of these homeless people were undoubtedly in plain sight before Occupy. It's a problem that giant bureaucracies in cities like New York and Los Angeles have failed to address, so it's hard to see how the occupiers will be able to grapple with these issues over the long term.