How to save small farms 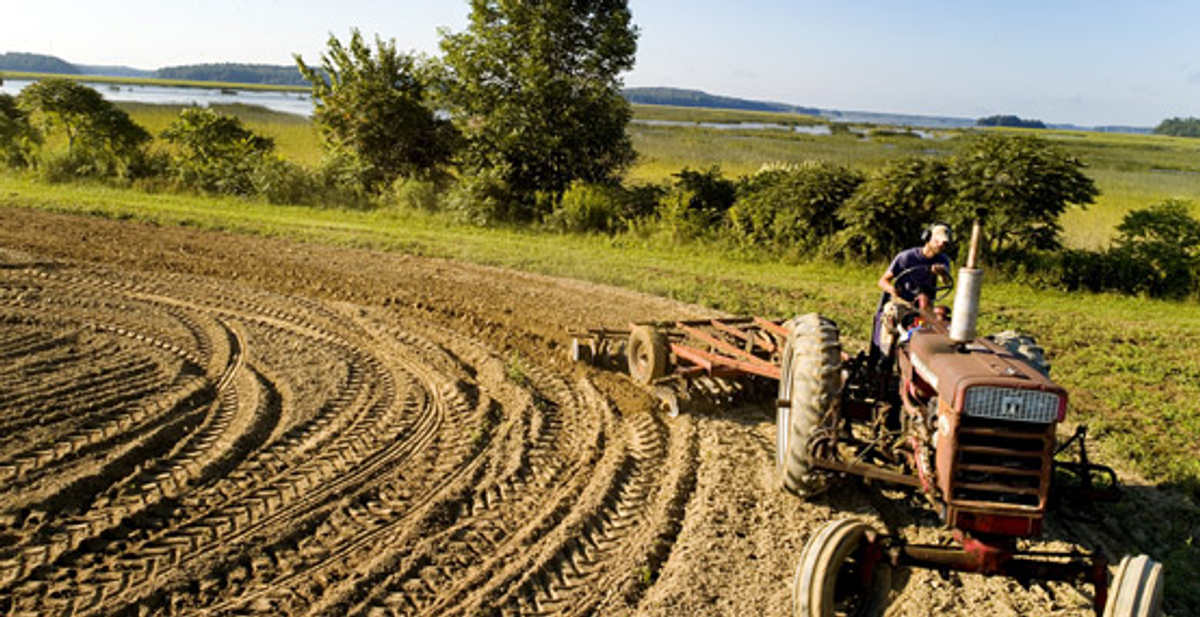 You could say Penny Jordan saved the farm. A veteran of the insurance industry with a business degree, she came back to work at her Maine family farm at age 48. Since then, she’s revitalized her old farm stand business with a bus that delivers produce to senior centers. She’s opened a tiny restaurant on wheels, The Well, where a fine-dining chef turns out an ever-changing menu to be eaten at picnic tables by the parking lot—albeit one with a stunning view of Spurwink River. Jordan, a spunky, silvery blonde who favors fleece and Carhartts, has so much energy she almost bounces as she walks. Her creativity may spark new business models for other small farms, and why not? This is a woman who seems like she could do anything.

But Jordan doesn’t take the credit. The secret to her booming business, she says, is instead a complex and seemingly rather dull legal contract called an agricultural easement. The arrangement, made with a land trust, allows farmers to be paid in return for stripping their land of its development rights – no new subdivisions or shopping malls allowed – and instead keeping it as farmland. In 2004, the Jordan family placed 47 acres of their property under an easement with the Cape Elizabeth Land Trust for an undisclosed sum. “The Jordans settled Cape Elizabeth,” Jordan says. “We would not have kept the farm, let alone been able to invest in the business, without this.”

Interest in small-scale agriculture has soared over the last decade. But it’s still anything but easy for farmers to get in or stay in the game, not least because farmland itself is disappearing: In Maine, for example, 75 percent of farmland has vanished since 1950. What’s left is often worth more as future house lots than as a farm—especially if it has panoramic views like the Jordan farm. Over the next decade, about 400,000 acres, or about one-third of Maine’s remaining farmland, will be in transition as older farmers retire or die. Here in the Pine Tree State, agricultural easements are an increasingly powerful tool to help revive and grow small farms.

John Bliss and Stacy Brenner have built their business – a 150-member CSA, a farm stand and flower design studio – thanks to an agricultural easement. Their 150-acre Broadturn Farm is actually owned by the local Scarborough Land Trust, which leases it “at a very modest rent” to the young couple. Bliss and Brenner are your stereotypical new farmers. They’re young, business savvy and hip – you can just picture them sampling cheese and sipping a craft brew at a bar in Brooklyn – and neither of them grew up farming. (Plus, if either of them decides to give up on farming, they have a future as models for J. Crew.)

Over the next decade, about one-third of Maine’s remaining farmland will be in transition as older farmers retire or die.

After apprenticing for a few years, Bliss and Brenner learned enough to want to set out on their own. But had they bought the land they currently occupy, it would have cost $750,000 and one of them would have had to take an off-farm job to pay the mortgage. “This is an arrangement where we have an affordable rent and we can reinvest in our business, not the real estate,” says Brenner.

In Damariscotta, about an hour north, the Maine Farmland Trust, a state preservation non-profit, purchased a 67-acre farm for $500,000 along the state’s main thoroughfare, Route 1. Its plan: To sell it for less than half that to the local food co-op, Rising Tide, or to a new farmer. It’s an example of what the Trust calls a “Buy, Protect, Sell” program, which has preserved 3,000 acres of farmland since it was launched in 2008. “Buy high, sell low doesn’t seem like a good business plan. But to preserve land, it makes sense,” says John Piotti, the Trust’s executive director.

Initially, the farm’s owner planned to sell the land to Wal-Mart. But the community revolted, and the deal was abandoned. Concerned that the land would still be developed, the Trust purchased the land and put an easement on the property. The easement payments, which come from federal and state agencies, plus private fundraising, will allow the Trust to sell the acreage at the farmland value, $180,000, and still just about break even.

For the Jordans, an easement was their ticket to stay on the farm, which was experiencing financial issues. Money had been diverted from the business to help pay for family health care, among other things, and there were overdue bills and unpaid taxes.

The money the Jordans received for the easement allowed the family to make a substantial capital investment in the farm. They almost doubled the number of acres under cultivation, from 40 to 70. They built a new three-room farmstand, where at this time of year you might find squash, shell beans, kale, salad greens, beets, eggs, apples, cider and maple syrup. Retail sales, which are far more profitable for farms, now make up 90 percent of the family’s business.

Business certainly was brisk on a recent sunny autumn afternoon. Older couples parked their cars and greeted sales staff by name. Mothers piled apples and greens in their baskets and appeased their children with pumpkins stacked on a bale of hay by the door. “Writing an easement – it was the hardest process. But it forced the family to confront the hard decisions that had to be made,” says Jordan. “And that’s what saved the farm.”