Your Declarations: Readers respond to our manifesto

From campaign finance reform to narrowing our focus, you weigh in on Salon\'s grand plan to remake the nation 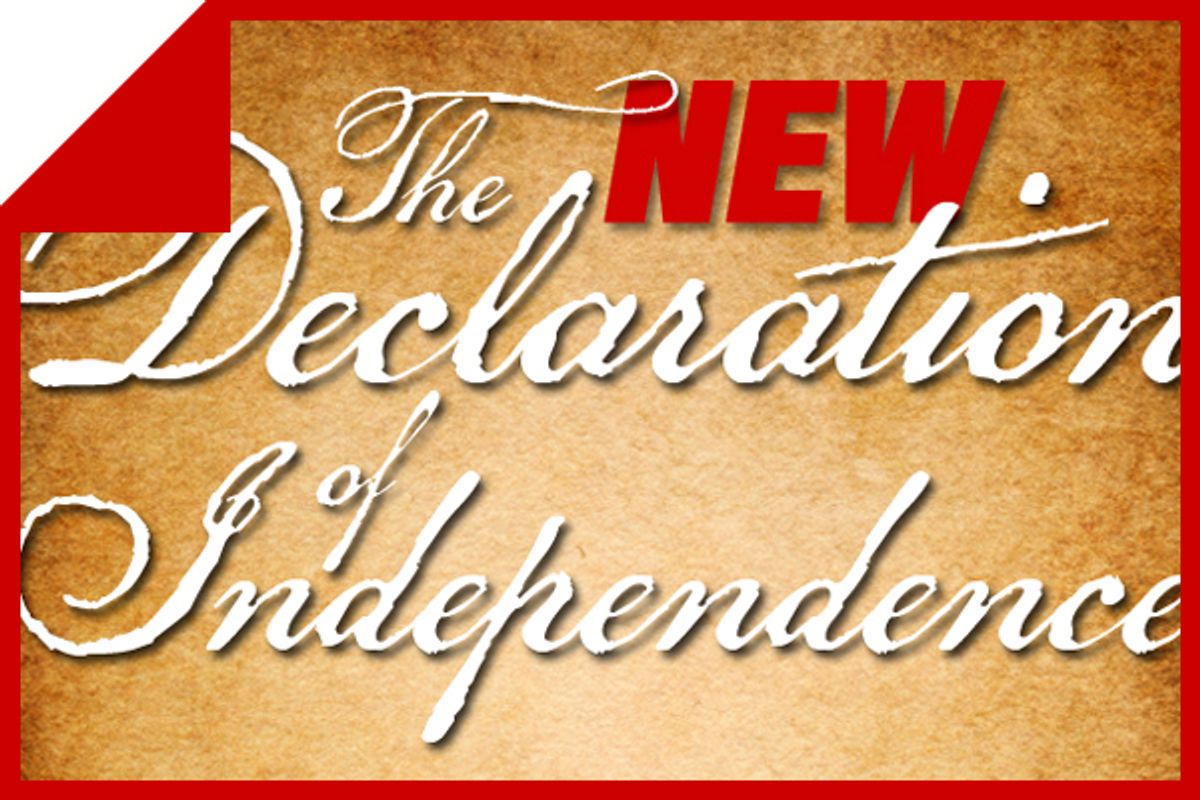 The response to Salon's New Declaration of Independence has been gratifying and illuminating. On Twitter, Facebook, in the comments, and via email you've told us what you thought we left out of our list of demands and told us where you think we should focus. And a lot of you agree that we left out a biggie:

Dozens of responses to the piece argued passionately for public financing of elections. That's no surprise, because campaign finance and the power of money to corrupt our government has been a major theme of the Occupy protests and the work of scholar activists like Lawrence Lessig. A lot of readers argued that there was no hope of action on most of our priorities without a complete overhaul of the way we finance elections.

I appreciated Greg in FL's recommendation of a constitutional amendment reading, simply, "Corporations are not People and Money is not Speech." The meaning -- and potential First Amendment implications -- of such a statement would be heavily debated by politicians, judges and citizens, but it's worth a public debate. AMWinSF had an extensive proposal as well.

mccorman stated one of the major tax issues simply: "whereas at one time America taxed unearned income at a higher rate than earned income, this has now been reversed." Warren Metzler quibbled with his numbers, but I think it's probably wise to focus broadly on the taxation rates of earned versus unearned income than to get bogged down in arcane specifics of the tax code like the carried interest loophole.

A complaint, from Ban Johnson:

This all just reads as a liberal political party platform. Nothing wrong with that, but it's hardly going to persuade the unconverted. Gay rights, drug rights, climate change, and the military-industrial complex are not exactly pressing concerns for the majority of the middle class right now.

This is a reasonable critique, actually. The demands were arrived at after an internal brainstorm and debate among a bunch of us here at Salon, and there was disagreement over some of them. It can be argued that LGBT rights have nothing to do with the economic concerns and outrage over the greed of the financial sector that have animated the "We Are the 99%" movement and the Occupations. It's possible that including addressing climate change muddles the message of equality of opportunity and security for working people and the middle class.

Every item on the list is about justice and making the U.S. a more fair society, and I consider them all important -- hugely important, in most cases -- but is a movement based on mass inclusion and consensus best served by adopting a singular focus on economics and money? I'm not sure, and I welcome more debate.

Other ideas: sticks recommended a new bill of (positive) rights, and a Parliamentary style government, both things I'd favor, but both very tricky to accomplish. Cuchulain2007 had a slew of ideas and one in particular that stood out:

What is needed is an end to the resale of any loan, in whole or in part, in any form, at any time. The originating bank or lending firm must keep the loan, forever, and 100% of that loan, until it's paid off. If it can't do that, it shouldn't be in the lending business in the first place. We need to make it a law that all loans remain with the original lender. Forever.

This would help a lot of homeowners and students while limiting the games financial firms can play without debt.

John McCall had a positively Gladwellian counterintuitive proposal: If we paid our congressional representatives more, they'll be less beholden to moneyed interests. (Similarly, bigger congressional staff budgets would reduce reliance on lobbyists for policy expertise, and big salaries for regulators would attract people who'd otherwise be paid to evade regulators.)

And some readers suggested that we aimed too low, and should have set our sights on a broad remaking of American society -- via a new Constitutional Convention perhaps -- though I liked Captain America's suggestion that we "start from first principles."

Something like: government exists for purposes of protecting and advancing the will of the entire citizenry, irrespective of wealth or other privilege. From there, you get to particulars, like drug laws, the Patriot Act, war, electoral corruption, etc.

As we said, this was meant to be the beginning of the conversation. We still welcome feedback and suggestions and argument.