Let's not let Mitt off the hook too easily 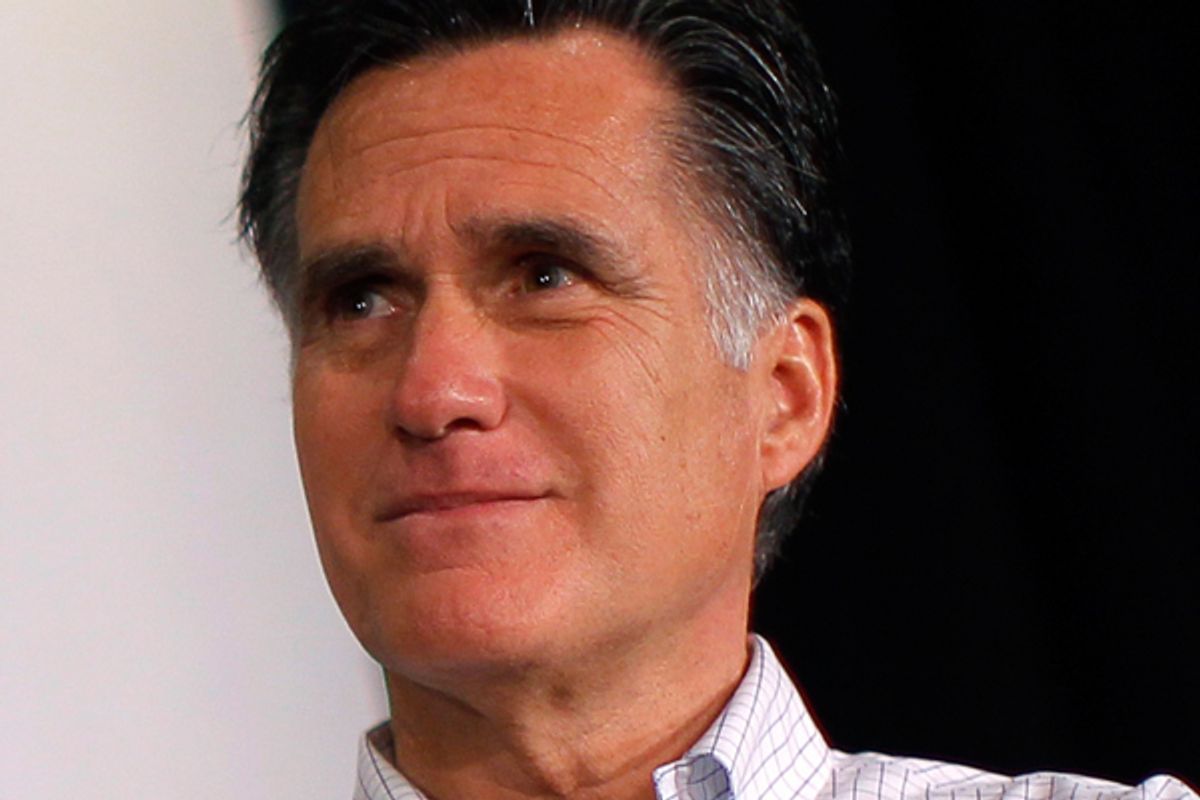 It’s not Romney who is the flip-flopper. It’s the conservative movement. It was only three years ago that Jim DeMint was praising the Massachusetts healthcare plan. Post-2009, conservatives have flip-flopped on individual mandates, they have flip-flopped on monetary policy, in these cases they have adopted ever more extreme positions. Yes Romney has had to shape-shift to keep pace, and that’s unfortunate. But don’t blame him – blame them.

Frum's point about the behavior of the conservative movement is well-taken. The right's leading voices essentially redefined conservatism in 2009 as "the opposite of whatever Obama says and does," even if it means fighting policies with deep conservative roots. And the GOP's base -- which greeted Obama's election with almost hysterical resentment, as it tends to do whenever Democrats win the White House -- was happy to play along. This has compelled many established Republican politicians to engage in the sort of absurd rhetorical acrobatics that Romney has relied on to lash out at a national healthcare reform law that was inspired by the program he himself championed in Massachusetts back in 2006.

But please, let's not let Mitt off the hook this easily. The purity demands of the GOP base may be drawing attention to it now, but his tendency for flip-floppery predates the Obama-era. In fact, it pretty much defines his entire 17-year political career, in which Romney has been all over the map on just about every issue imaginable. The only constant in the maze of conflicting positions and principles Romney has espoused is transparent political calculation -- it's always ridiculously easy to identify the link between his latest rhetorical adjustment and whatever political imperative he faces at the moment.

Take abortion. The conventional understanding is that Romney simply flip-flopped on the issue: He used to be pro-choice and now he's pro-life. In his post, Frum notes that such a shift is hardly unheard of and suggests that Romney ought to be applauded for his willingness to change his mind -- "[t]he only people who never change their minds," he writes, "are fanatics." But the full story of Romney and abortion -- which I laid out in detail over the summer  -- amounts to an 11-year chronicle of spineless political opportunism.

The key moment, for my money, came during Romney's sojourn in Utah, where he relocated in the early '00s to oversee the Salt Lake Olympic games. This was between Romney's failed 1994 bid for the U.S. Senate -- in which he relied on a powerful personal account of a relative's death from a pre-Roe back alley abortion to convince socially liberal Bay State voters that "you will not see me wavering" on a woman's right to choose -- and his victorious campaign for governor in 2002.

While in Utah, Romney believed the '02 governor's race in Massachusetts wouldn't be an option for him (a Republican, Jane Swift, was serving as acting governor and was expected to seek a full term with the state party's support) and turned his eye to Utah, where the governorship would be open in 2004. For a time, it seemed like the better option for Romney. But abortion would be a problem: Utah Republicans, a very conservative group to begin with, generally award their nominations at a convention dominated by their most ideologically pure elements. So when the local press began reporting on his potential interest in the '04 race, Romney sent a letter to the Salt Lake Tribune stating that "I do not wish to be labeled pro-choice." But then Swift's standing in Massachusetts cratered and Romney found the '02 opening he'd wanted all along. He returned to Massachusetts, reaffirmed his support for Roe (this time using more guarded language), and won the election, then shifted gears again in 2005, declaring himself pro-life and chalking up his conversion to a conversation to a conversation with a Harvard stem cell scientist that the scientist vehemently disputes. The thread that runs through all of this is a transactional approach to politics: Who do I need to win over and what do they want me to say?

Abortion, of course, is only the most glaring example of this. There was a time when Romney would brag that he was more supportive of gay rights than Ted Kennedy and that he'd voted for Democrat Paul Tsongas for president in 1992, and when he'd forcefully distance himself from Reagan conservatism. All of this was well-established four years ago, when Romney -- sensing an opening to John McCain's right in the GOP race -- refashioned himself as a red meat-spewing national conservative, promising to "double Guantanamo" and warning that the election of a Democratic president would amount to "a surrender to terror." His flip-floppery was very much an issue in the '08 race. As a New Yorker cartoon caption put it back then, "Romney is a passionate advocate of each new stance he takes."

This is what makes Romney such a mystery. Many assume that he's secretly a slightly right-of-center conservative who is willing to contort himself in whatever ways he has to in order to win the White House, but that he'll govern pragmatically if he ever gets there. This is the George H.W. Bush model. But this might be giving Romney too much credit. He could be a lot more inflexibly conservative than we realize, at least on some issues -- what if he was  faking it more in Massachusetts than he is now? Or what if he just doesn't believe in anything besides climbing the political ladder and perpetually meeting the demands of his coalition? If the same inflexibly conservatism that defines the Obama-era GOP lingers into a Romney presidency, then we'd probably get a president who reflects that.

So yes, it's true, the conservative movement is guilty of flip-flopping these past few years. But this is not what turned Romney into a flip-flopper, because it's really all he's ever been.