Scarlett Johansson has no regrets over nude pics

Her sexy photos hit the web, but the actress feels no shame -- and neither should anyone who shares a flirty moment 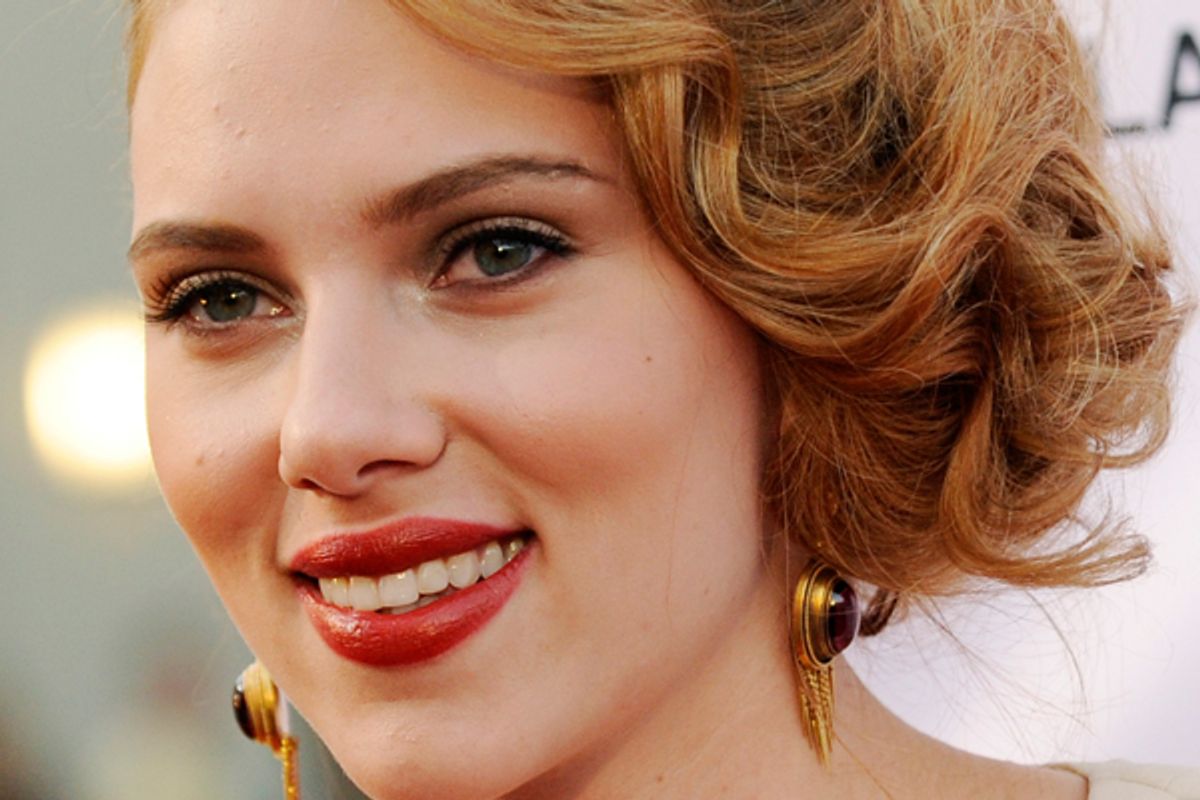 Last spring, news emerged that authorities were investigating a hacker who lifted nude images of Johansson, along with other celebrities like Mila Kunis, from their phones. But it wasn't until September that the image of a woman resembling the "Avengers" star, cleverly employing two mirrors to flaunt a butt that goes on for days, hit the Web. The photo inspired such a tidal wave of copycat poses that the phrase "ScarlettJohanssoning" promptly entered the lexicon. "I know my best angles," she says now.

Johansson's accused hacker, Christopher Chaney, has since pleaded not guilty of breaking into the emails and cellphones of more than 50 people – including a 13-year-old. Chaney has been indicted on multiple counts of computer hacking, aggravated identify theft and illegal wiretapping. He faces up to 121 years in prison.

Based on comments around the Web Wednesday, it's clear that some still consider a lady who shows off the goods – even  for her lawfully wedded husband – to be the mayor of Tramptown. Let's hear from the trolls! "Everyone has already seen her naked in movies," wrote a commenter on E! "It's not like she had any real pride or respect to protect." "One way to avoid getting mugged is to not walk in the worst parts of town. One way to avoid having your nudie pics on the Internet is to NOT TAKE ANY!" explained another on CNN. "Sorry Scarlett, you may not be at fault, but you sure are dumb." And as a commentor on Us Weekly's site speculated, "Anyone who does this has some sort of problem. Voyeurism ... exhibitionism. She could have removed or discarded."

But the woman who famously showed off all those best angles on the cover of Vanity Fair five years ago is not the skank here. The skank is the person who violated Johansson's privacy and distributed something meant for one person to the world. And if you want to judge ScarJo -- who, by the way, already appears well over it -- feel free to imagine the most intimate thing you've ever written in an email, the most revealing photo you've ever taken and how unquestionably unforgivable it would be for someone to steal that and show it to the world.

It is a sad fact of modern life that if you make racy pictures or sex tapes, there's always a chance they may fall into the wrong hands. That's just the risk we run every time we get a little naughty in the bathroom mirror. But if you're willing to accept the potential for your butt shots going viral, the act itself is nothing to be ashamed of -- and nothing to apologize for. You don't have to be a famous sex symbol to appreciate that we're all sexual beings, or that there are all kinds of ways of being playful, flirty and seductive. And you don't have to have anywhere near the kind of angles Johansson does to be comfortable enough with your own body to share pictures with the person you love.  Maybe now ScarlettJohanssoning can have a new meaning – a phrase to imply not giving a damn what the rest of the world thinks of your private life.