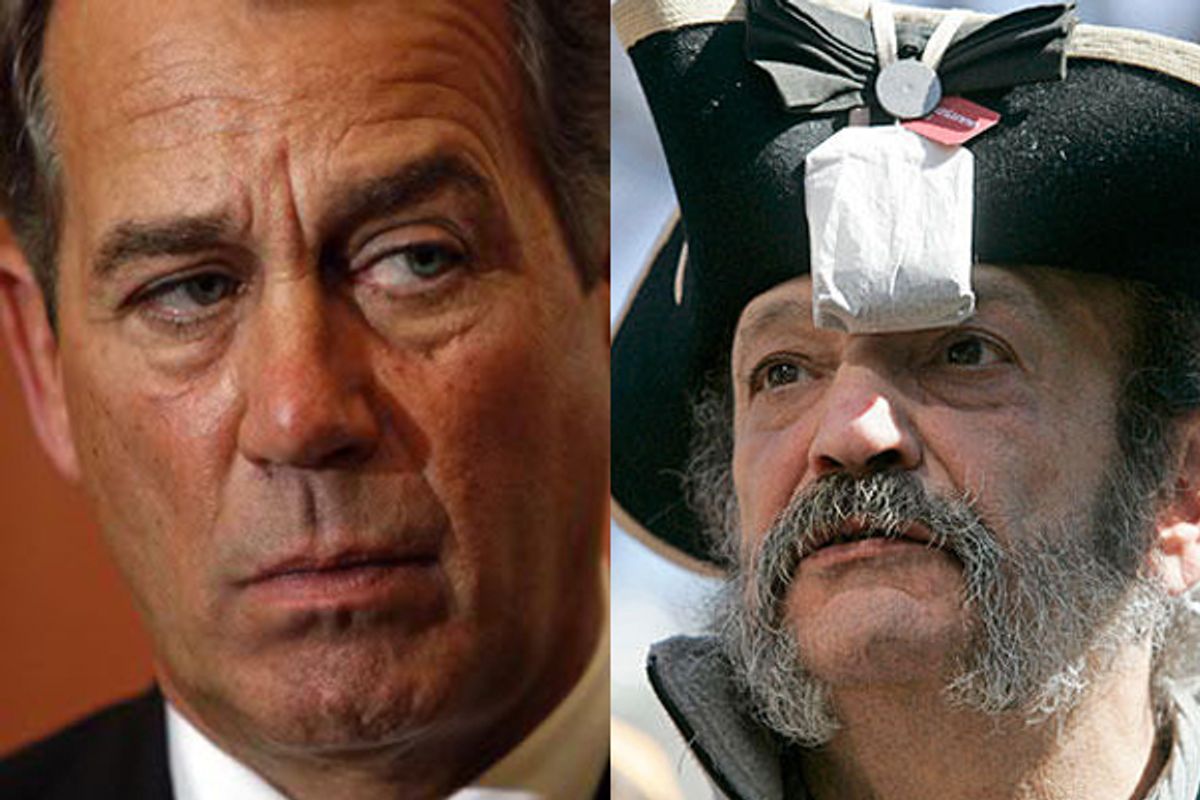 As the Occupy Wall Street movement continues to buffet national politics, two distinct modes of reaction have emerged on the right: hostility and grudging conciliation.

In the former camp is the Tea Party and much of the right-wing punditocracy. In the latter camp are establishment Republican politicians who no doubt have one eye glued on poll results that show a plurality of Americans broadly agree with the Occupy movement.

Consider two very different takes on Occupy this week, both from the right.

On Tuesday, a Tea Party-affiliated group called the Campaign to Defeat Barack Obama blasted out an email to supporters with the heart-pounding subject line "White House in Panic Over OWS Mobs." The group asked for donations to run an ad -- which splices unflattering footage from Occupy protests with statements of support from Democratic politicians -- on TV and the Web. The ad is titled "Democrats Shamefully Support Occupy Wall Street":

The Campaign to Defeat Barack Obama was created by the same Sacramento, Calif.-based political action committee that started Tea Party Express, perhaps the most prominent organized Tea Party group in the country.

Now, compare the Tea Party group's blistering anti-Occupy ad to remarks made by House Speaker John Boehner, the most powerful Republican in the country, on Monday. He came off as downright empathetic.

“I understand people’s frustrations,” Boehner said at an appearance in Louisville, Ky. “The economy is not producing jobs like they want and there’s lot of erosion of confidence in our government and, frankly, under the First Amendment, people have the right to speak out …"

Boehner's remarks came a few weeks after House Majority Leader Eric Cantor had to walk back his originally denunciation of protesters as being part of dangerous "mobs." And New Jersey Gov. Chris Christie, a national GOP star, also expressed a measure of understanding last month.

"So I think the Tea Party folks, who started this whole discontented movement about three years ago or so, and now you're looking at these Occupy Wall Street folks, and while philosophically I don't agree with what they're advocating, at all, I do understand that their protests are an outgrowth of a big concern about the dysfunction of our government, the inability to get anything done," he said.

Media Matters, meanwhile, has compiled the reaction of Rush Limbaugh, Sean Hannity and Co. to the protests: dismissing them as, by turns,  moblike, crazy, violent, anti-Semitic and communistic.

It will be interesting to see how this dynamic plays out within the GOP into 2012, especially if Mitt Romney -- who himself has softened his initially hostile rhetoric toward Occupy -- is the nominee.