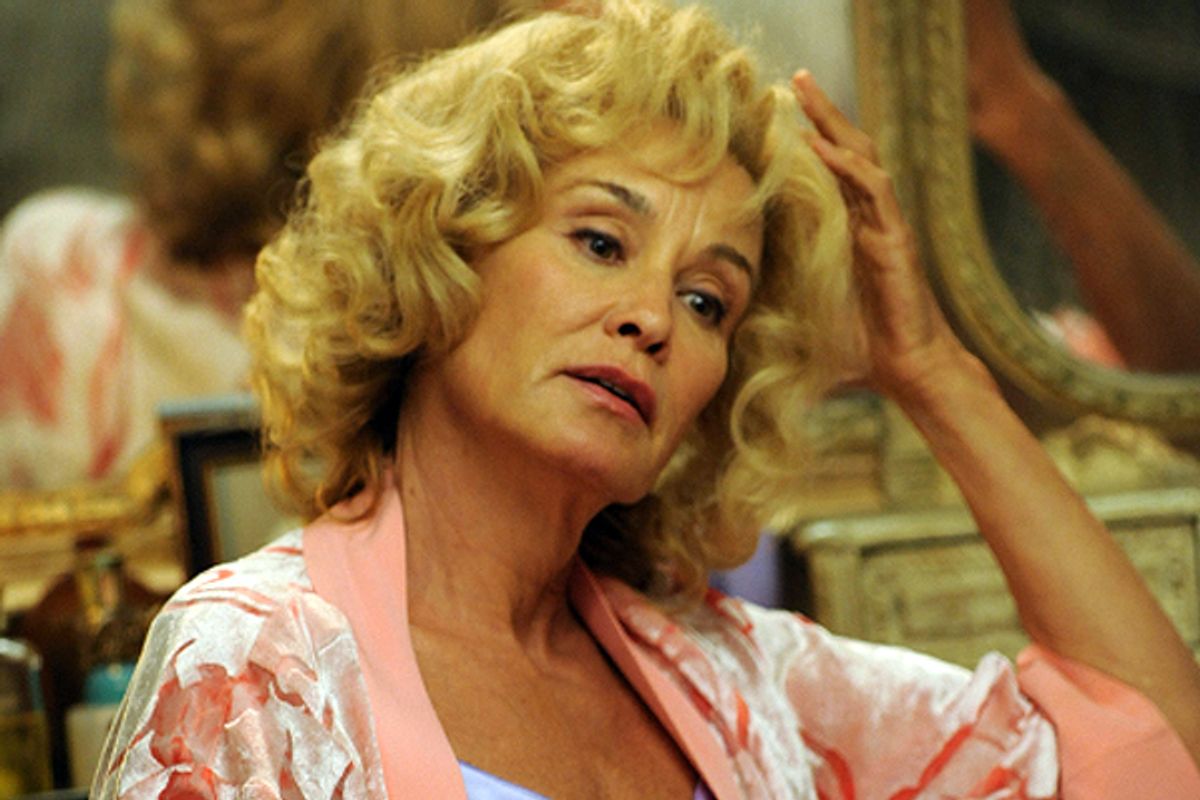 Anybody who's still watching "Glee" will testify to how awful last night's episode was -- and that's quite a statement considering that even the most brilliant "Glee" installments flirt with awfulness. The bits with Mike O'Malley's garage-owner character, Burt Hummell, running for Congress against Jane Lynch's venemous Coach Sue were almost tolerable, but only because I love O'Malley and think he's hugely underused. Much of the episode was dominated by tedious subplots in which 1) glee club coach Will Schuester managed Burt's surprise congressional run, and 2) innocent/stupid Brittany thought that the Irish foreign exchange student ("Glee Project" winner Damian McGinty) staying with her family was a leprechaun. Even the musical numbers flatlined; the best of the bunch, McGinty's "It's Not Easy Being Green," was undercut by the ludicrous notion that a handsome young man with a great smile and an Irish accent would be ostracized anywhere, least of all in a Midwestern high school.

If "Glee" has, in fact, run out of steam, I suspect it's because two of its executive producers, Ryan Murphy and Brad Falchuk, are busy putting out another series, FX's "American Horror Story" (Wednesdays 10 p.m./9 Central). Like "Glee", and like "Nip/Tuck," which involved many of the same people, "AHS" flirts -- nay, tangos -- with awfulness in every second of every episode. The show chronicles the misadventures of a troubled couple, Vivien and Ben Harmon (Dylan McDermott and Connie Britton), who buy a beautiful faux-Victorian house in L.A., and are haunted by the seemingly infinite number of violent acts that have taken place there (and throughout the neighborhood). There is nothing -- repeat, nothing -- subtle about this series. It's a jumble of pathology and mayhem -- horror for the YouTube generation, which fast-forwards through a viral video if more than a few seconds elapse without a laugh, a shock or something "outrageous" happening. Every scene has a murder, an assault, a coverup, a display of perversity, a shouting match, or a jaggedly edited flashback to a past atrocity. James L. Levine's intrusive underscore commands us to be creeped out. Even though the scenes are perched on the knife-edge of emotional breakdown to start with, Murphy and Falchuk can't resist jangling the audience's nerves by having the actors suddenly start yelling at each other, tears squirting from their faces.

Murphy and Falchuk blur the lines between this world and the Great Beyond in casual ways that suggest theater more so than commercial TV or movies. There are present-day scenes and flashbacks, and scenes in which flashback characters materialize in the present, interacting with "regular" characters like flesh-and-blood people rather than ectoplasmic intruders or manifestations of mental illness. A 1920s woman who was married to a drug-addicted abortion doctor who performed Dr. Frankenstein-style experiments in his basement shows up in the present, inspecting the house she once lived in. McDermott's character, a therapist who sees patients in his haunted house, believes that their pushing-60 one-eyed maid, Moira (Frances Conroy), is a bubble-butted 20-something who's relentlessly trying to seduce him -- and who knows, maybe she is! Moira used to work for the crazy woman next door, Constance (Jessica Lange), who once discovered her alcoholic, abusive husband mounting young Moira in the master bedroom and shot her eye out, then popped hubby three times in the chest. Vivien is pregnant with a child that's supposedly Ben's but that seems to be gestating really quickly -- and violently. Ben secretly got a young Boston woman pregnant. When she refused to have an abortion, he ... well, I was about to type "he murdered her,"  but the show blamed the killing on a burn victim named Larry (Denis O'Hare) who follows Ben everywhere and tries to extort money from him and who -- like many recurring characters -- might not really exist. (At least that's my take for now; Ben is, after all, going mad. Mentally healthy men do not respond to a lover's murder by burying her corpse in the backyard and building a gazebo on top of it.)

The series borrows from "The Shining," "Twin Peaks" and the Danish horror classic "The Kingdom," which merged supernatural goings-on with the internal demons of troubled individuals, producing tales in which every frame seemed infected with dread and evil. But its core inspiration dates back the early '60s, when movies were just starting to slough off content restrictions and camp was stepping into the spotlight. If it were possible to take a classic early '60s camp horror movie, feed it massive amounts of cocaine, then turn it into a basic cable drama, the result might look like this. The coke-addled classic would likely be "Whatever Happened to Baby Jane?" or its spiritual sequel, "Hush ... Hush, Sweet Charlotte," which played like pulp Gothic horror novels re-imagined by a pre-Stonewall cabaret troupe.

Like those films, "American Horror Story" is flamboyantly self-aware and incredibly high-strung. It is also at once intentionally and unintentionally funny, and doesn't seem to care if you laugh at it or with it. In the second episode there was a violent home invasion; the following week, Vivien pressed Ben to sell the place, then changed her mind after her troubled daughter Violet (Taissa Farmiga) gave her a "That which does not kill you makes you stronger" speech. Last week's episode kicked off with a flashback to the house's most recent pre-Harmon killing, the 2010 murder of a gay couple by a psycho in a black rubber suit. Like most of the show's characters, these two embodied cultural stereotypes -- in this case, the bitchy upper-middle-class "urban pioneer" gay couple, one of whom, Chad (Zachary Quinto, who publicly came out last month), is so fussy that he can barely function. "I don't give a shit about carving pumpkins!" he cries to his partner. "I want love! I want a relationship!"

The show's true star is Jessica Lange, who's in the age range of Bette Davis circa "Baby Jane" and "Sweet Charlotte" and just as regally nutty. Lange has never been afraid to let her freak flag fly, and in this show she's hoisting that baby over her head and twirling it in figure-eights. She's a plummy marvel, issuing every line in a sinuous sing-song and caressing props as if they were lovers' hands. Even her silences are in italics. Her performance encapsulates the spirit of "American Horror Story," an inventive, corny, stupid, shameless, exhausting series that will probably burn itself out even faster than "Glee" did.  Rubberneck while you can.