The human toll of the U.S. drone campaign 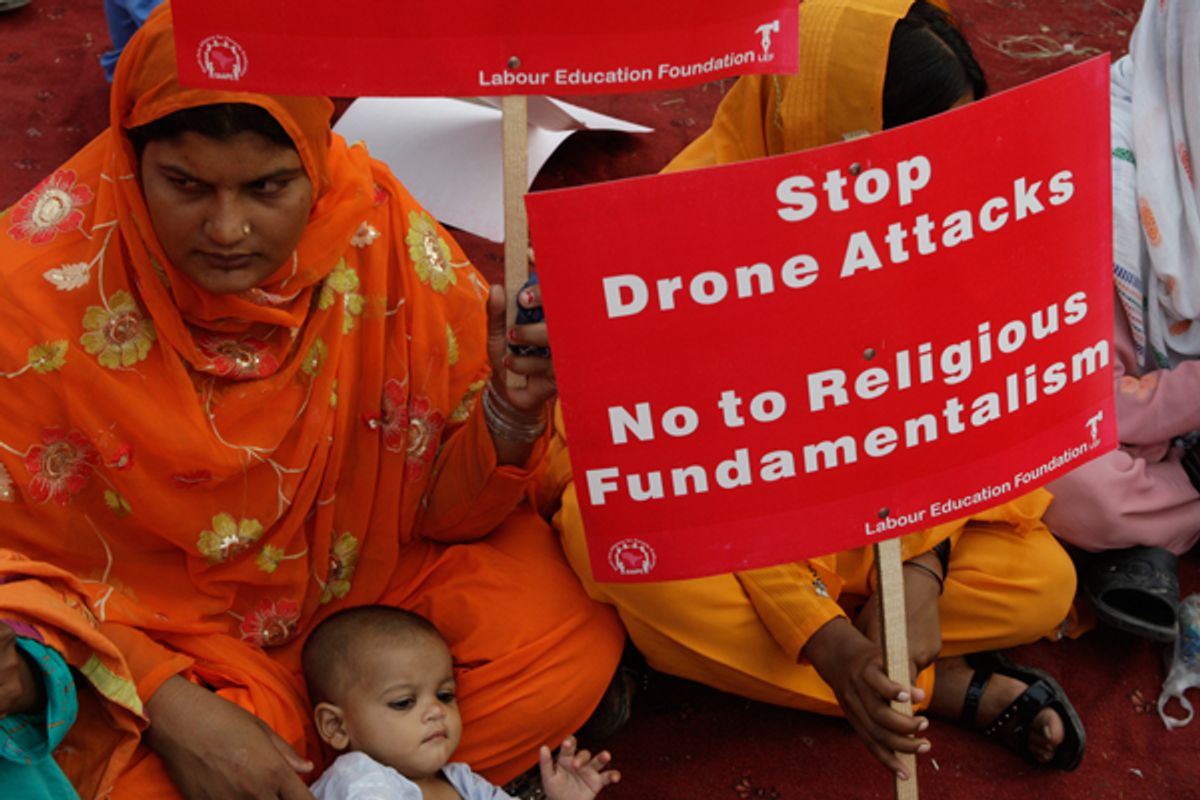 The principal reason so little attention is paid to the constant victims of American violence in the Muslim world is because the U.S. Government refuses to disclose anything about these attacks and media outlets virtually never report on those victims (MSNBC demoted and then fired its then-rising-star Ashleigh Banfield when she returned from Iraq and pointed out that fact in an April, 2003 speech denouncing the "one-sided" coverage of American wars: meaning, the invisibility in U.S. media of America's civilian victims). It's easy to cheer for a leader who regularly extinguishes the lives of innocent men, women, teeangers and young children when you can remain blissfully free of hearing about the victims. It's even easier when the victims all have Muslim-ish names and live in the parts of the Muslim world we've been taught to view as a cauldron of sub-human demons. That's why it's periodically worth highlighting the actual impact of those drones and the actual people they kill, as the BBC did today:

When tribal elders from the remote Pakistani region of North Waziristan travelled to Islamabad last week to protest against CIA drone strikes, a teenager called Tariq Khan was among them.

A BBC team caught him on camera, sitting near the front of a tribal assembly, or jirga, listening carefully.

Four days later he was dead - killed by one of the drones he was protesting against.

His family told us two missiles hit the 16-year-old on Monday near Miranshah, the main town in North Waziristan. His 12-year-old cousin Wahid was killed alongside him. . . .

After the missile strike on Monday, Pakistani officials said four suspected militants had been killed.

If the strike actually killed two young boys - as appears to be the case - it's unlikely anyone will ever be held to account. . . .

Many senior commanders from the Taliban and al-Qaeda are among the dead. But campaigners claim there have been hundreds of civilian victims, whose stories are seldom told.

A shy teenage boy called Saadullah is one of them. He survived a drone strike that killed three of his relatives, but he lost both legs, one eye and his hope for the future.

"I wanted to be a doctor," he told me, "but I can't walk to school anymore. When I see others going, I wish I could join them."

Like Tariq, Saadullah travelled to Islamabad for last week's jirga. Seated alongside him was Haji Zardullah, a white-bearded man who said he lost four nephews in a separate attack.

"None of these were harmful people," he said. "Two were still in school and one was in college."

The article quotes the international human rights lawyer Clive Stafford Smith arguing that because Pakistan is not a war zone, these killings are "murder." That's an argument that -- in the extremely unlikely event it were ever heard in America's establishment media organs -- would be treated with mockery and contempt. Everyone knows that the American President cannot commit "murder"; that's only for common criminals and Muslim dictators (whom the West starts to dislike). But however one wants to define these acts, the fact is that we have spent a full decade bringing violence to multiple countries in that region and -- in all sorts of ways -- ending the lives of countless innocent people. Outside of Iraq, that process over the last two years has acclerated in both frequency and geographic scope. And it has left in its wake a horde of dead-16-year-old Tariq Khans and half-blinded, double-amputee teenage Saadullahs about whom we hear almost nothing. But the people in that part of the world hear a lot about it, and that explains much about the vast discrepancy in perceptions between the two regions.

The New York Times and others love to complain that Pakistanis and "the Arab Street" are propagandized: crucial facts kept from them in order to distract attention from what their leaders are doing. It may be true that they are, but they are most certainly not alone in that.