"Mommy is a love artist" 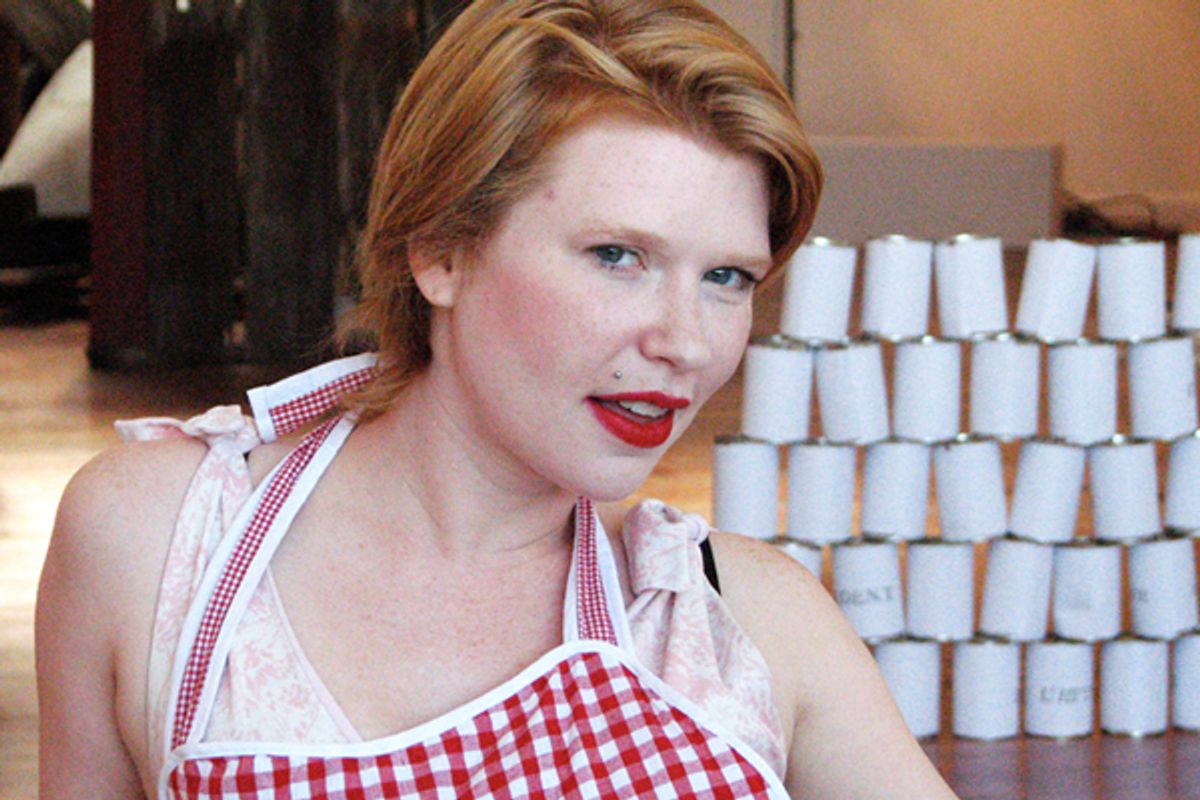 We are joined in bed by a handful of her friends and collaborators as the conversation ranges from the extreme, like the challenges of practicing bondage while lactating and age-appropriate ways to explain the concept of pornography to a child; to the prosaic, like how little sleep new moms get. That one of our bed-mates has a 2-year-old girl on her lap lends the sexual parts of the conversation a vague friction, which is fitting, given that Young's work explores the cultural tension between being a mother and being a sex symbol. It's part performance art, part interview -- and a total trip.

Can you explain the image of you with the spinner between your breasts?

With this one, this is really about the different ways that people see your breasts after having a baby, and the way that you view them yourself. You're feeding your child with your breasts but you're also a sexual being. I can be with my partner in the other room making passionate love when we're interrupted by a crying baby and then I have to rush in and use those same breasts to feed my child.

I think that was even challenging for my partner, he felt like, "Your breasts are Emma's right now. What if I mess something up? What if I disturb our child's eating by ... squeezing too hard?" There are certain things that even I don't do with my breasts now; I don't have them tied up or do any corporal punishment to them. I don't want to damage any of the milk ducts right now.

Why is the issue of sex and motherhood such a potent subject?

People obviously have a lot of issues around moms, regardless of whether their sexuality is documented on camera. Just Jane Smith having a sex life and having a kid and being out about it is controversial.

I like to make art about what's going on in my life right now, and my child is totally consuming my life. Even when I'm not with her, my identity is affected by her existence. She's my inspiration for basically everything that I do now. People would tell me before that everything would change when I had a kid, but I thought they meant, "You'll never do adult film again" or "You'll never make art again." It's not those kinds of things but rather why you're doing it or how you do it.

We're creating our own family, in our own way, instead of feeling like we have to move to the suburbs and have nine-to-fives and give up all that we are because we have a kid.

How much do you personally struggle with this new identity? It seems you're trying to deliver a message to a general public that has a hard time thinking about a mom's sexuality, let alone one who's in the adult business. But I'm sure you also struggle with it internally as well, right?

I've spent the last 10 years in the adult industry and I feel like I have become an expert at certain things -- like sex! -- that I get paid to do. Now, all of a sudden, I'm in a world where I have no clue what I'm doing. I'm just trying to write and to connect with other moms with similar experiences. That's why I created the San Francisco "Sexy Mamas" club a month after Emma was born. As I started talking about my own experiences, moms started coming up to me and were like, "Thank you so much for doing this. This the first time I've been able to be 'out' about being a part of an alternative sexual culture and also being a mom." I think that I find happiness in not feeling isolated and not feeling shame about who we are. That's really the core of what I do, whether it's in the adult industry or in art.

What do you talk about in the Sexy Mamas club?

Sometimes we just hang out and have lunch and talk about normal mom stuff, like our struggles trying to get our children to sleep and what solids they're eating -- but we don't have to be afraid about talking about work or sex as well. Our kids also have each other; they play together and are growing up together.

How do you explain what you do to fellow moms who don't have that shared experience of sex work?

A lot of times I lead in with the educational element. I'm like, "I speak on sexuality at places like Yale University and I direct for Good Vibrations."

Let's talk about the controversy over the breast-feeding image.

What was interesting was that people were projecting all these fears and hang-ups that they have onto that image. So I think there's obviously some conversation that needs to happen around it, and hopefully we can create some safe spaces for those conversations.

The controversy seemed potentially very frightening. I was just recently reading about a case in which a couple was arrested after their daughter found naughty photos they had taken of themselves and brought the shots to school. That was in 1999, just over a decade ago.

That's why when people started using the p-word [pedophile], it just seemed so incredibly loaded and dangerous. As a mom, you're constantly worried: Am I doing the right thing? Am I giving her enough love? Should I be here talking to you instead of being with her right now? It is gut-wrenching to leave her when I go to work every day. And then you feel like you're not doing as good of a job at work because you're thinking, "I have to hurry home to my child!" These are things that every mom, especially every working mom, deals with. It's really challenging on top of that when you have numerous articles and comments from strangers about how you're not doing a good enough job parenting, because you already have your own anxieties around that anyway.

The one question I always hear asked of moms who are in the adult business is, "What are you going to tell your child?"

What I tell everyone is that I plan on being honest with my child and talking with her in a language she understands, which is the same as I do with any member of my family or anyone who is outside of the adult industry. Finding some commonality, something that they understand and can relate to, and talking with them on that level.

I'm creating a children's book right now that's called "My Mommy Is a Love Artist." It's about a mom who creates art and film that captures the love that people have for one another. There are hearts everywhere and it's like, "My mom goes on a safari, she goes through the wildnerness and finds people who are having magical experiences together and then captures them on film as they have their magic love." It shows them holding hands and kissing. It advocates for love and for connection. And a lot of the people that I do shoot are real couples. Everything that I do is about capturing actual authentic pleasure. I think you can explain pleasure to a child -- they have pleasurable moments, they love to give hugs and to receive kisses and be tickled. I'll inform her about more things as it makes sense to address them, but I want her to understand the basic concepts of what I do. Right now, though, it's all Elmo to her!

Another question that a lot of people ask is, "Have you told your family?" I really don’t see shame in what I do and I don't want my child to feel that I do anything that is shameful. I don't want her to feel that our bodies are shameful. But I also want her to come to her own conclusions. She can either support this when she gets older or she can have her own valid reasons for not supporting it. I can't make her be a sex-positive feminist when she grows up.

She has to rebel somehow, right?

She might be out there picketing Good Vibrations or something!