Put your money where your mouth is

A note (and plea!) from the CEO: It's time for the 99 percent to fund the new America 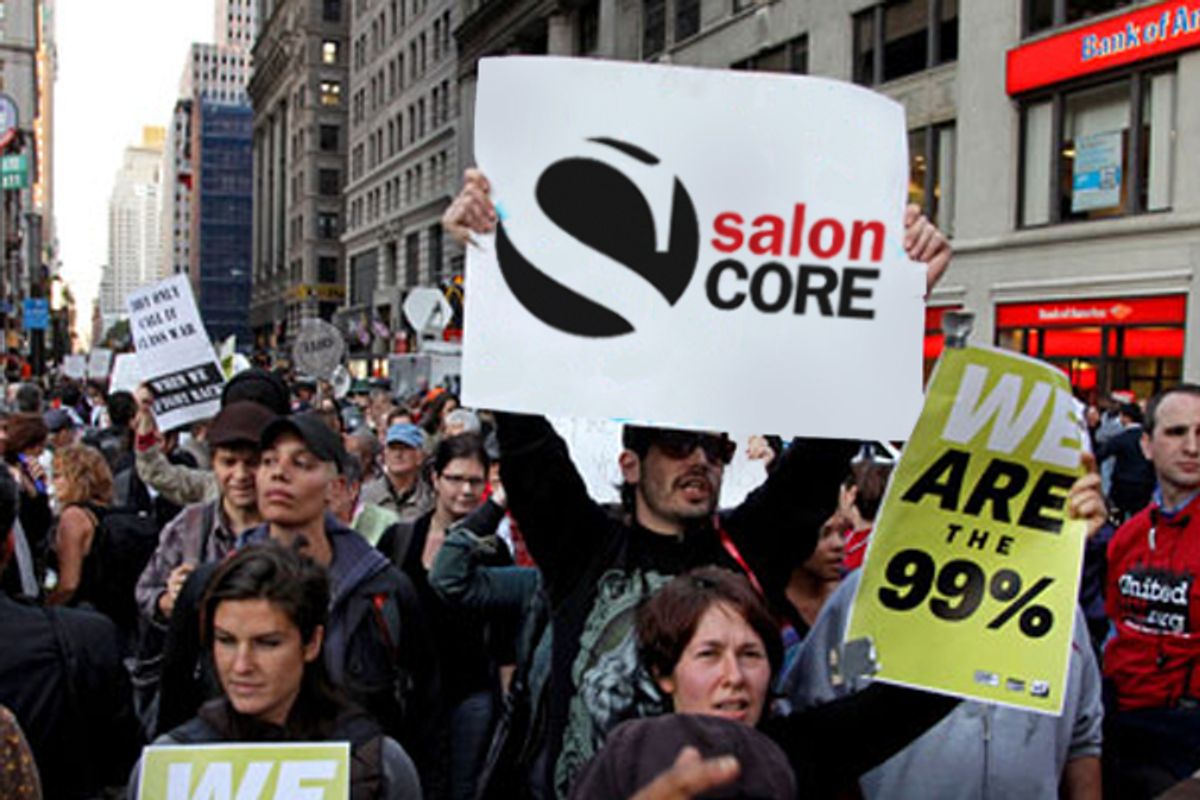 It's time for all of us to start putting our money where our mouth is. On Saturday, Nov. 5, many people will do just that, transferring their checking and savings accounts from rapacious giants like Bank of America to community-based lending institutions, credit unions and other financial organizations more responsive to the needs of their customers. You can only screw and gouge people for so long before they finally bite back. B of A has been trying the public's patience for way too long -- grabbing a big government handout, and then squeezing struggling homeowners, jacking up credit card rates, and laying off thousands of workers. The bank's latest act of arrogance -- announcing a new monthly fee on debit card users -- was the tipping point for many customers. Sure, bank officials finally blinked, canceling plans for the new fee and explaining that they had “listened to our customers." But don't expect that to become a habit at Bank of America.

All across America, the Occupy Wall Street movement has galvanized the long-abused American people. Now the movement is going beyond simply protesting the financial industry's massive theft. People are taking concrete steps to reverse the historic shift of wealth to the 1 percent. Organizations like MoveOn deserve credit for kickstarting Bank Transfer Day, by declaring that "it's time to make Wall Street pay in our communities," and calling for a big day of protests outside local branches of Wall Street banks.

This is a good start. Now we need to extend the Bank Transfer idea, disinvesting not only from oppressive financial institutions, but from corporate politics and corporate media. American democracy has become thoroughly corrupted by the flood of corporate dollars and influence. Propelled by the obscene Supreme Court ruling on corporate campaign financing, spending during the 2012 campaign year will likely double over 2010 expenditures, skyrocketing to nearly $8 billion. The Republican Party is a wholly owned subsidiary of the 1 percent. And the Democrats are close behind, with President Obama charging close to $40,000 a plate on the campaign dinner trail. Real campaign finance reform is impossible, with corporate-controlled politicians in both parties blocking any substantive legislative efforts to clean up the system.

The 99 percent need to counter this deep corruption by withdrawing their campaign dollars from bought-and-paid-for politicians, and channeling these donations to new leaders who pledge to support the new declarations of independence that are now being put forward by the movement. We have seen the power of digital democracy and grass-roots fundraising. A full quarter of Obama's campaign contributions in 2008 came from small donors. We're the 99 percent. We need to harness our collective power. We can use this financial clout to punish candidates who are working against our interests, and to reward those who are fighting for us. When a political leader like New York Gov. Andrew Cuomo spits in the faces of the working people, students and Democratic activists who mobilized to elect him by opposing extension of the state's millionaires' tax -- and has the utter gall to declare it a principled decision -- we need to defund him. Our hard-earned money should go instead to those elected officials who regard the 99 percent as their constituency, not the Kochs and Trumps.

Those who want deep change in America also need to support the media organizations that are speaking truth to power and fairly covering the new social movements. Fox News is not the only media mouthpiece that has declared war on OWS. As Salon contributor Gary Kamiya recently pointed out, the daily newspaper in liberal San Francisco, of all places, has also been pounding out a relentless drumbeat of criticism against the Occupy movement. The San Francisco Chronicle has called for the mayors of San Francisco and Oakland to unleash the police against protesters, and when they wisely did not comply, the newspaper's editorial page prayed for rain to wash out the tenacious encampments in those cities. The Hearst-owned Chronicle has no appreciation for the way real democracy functions. Democracy in the streets can be rough and dirty sometimes. But at long last it's real. The mainstream media prefers the smooth-oiled machine of corporate-funded bipartisanship. But the times demand rougher strife. The 99 percent are not in a position to fly their congressional representatives to lobbyist-funded junkets in the Bahamas, so we must rely on a scruffier form of free speech to get Washington's attention.

And now for the shameless self-promotion. Instead of subscribing to newspapers like the Chronicle that are dedicated to snuffing out this exciting experiment in democracy, citizens who want real change should consider subscribing to media like Salon -- which demonstrated where its heart was recently by hooking up the OWS site in San Francisco to the Internet. Or donating to web sites like AlterNet, which did the same for OWS in New York. Or contributing to nonprofit online dailies like the Bay Citizen, if you're looking for a wide and balanced spectrum of OWS coverage in the San Francisco area.

As Salon staff writer Andrew Leonard observed, we are witnessing the birth of an alternative America, with our own new financing mechanisms. We must also find ways to support a thriving independent media, because the fight for a new America will not just be won in the streets or in legislative halls -- it will happen in the media clouds, where the battle for hearts and minds clangs loudly every day.

You can make sure that the voices of real democracy are heard. If you appreciate the powerful commentary of Glenn Greenwald and the street reporting of Justin Elliott and the many other columnists, reporters and editors who work hard to bring you Salon each day, then put your money where your heart is. Please join Salon Core today.