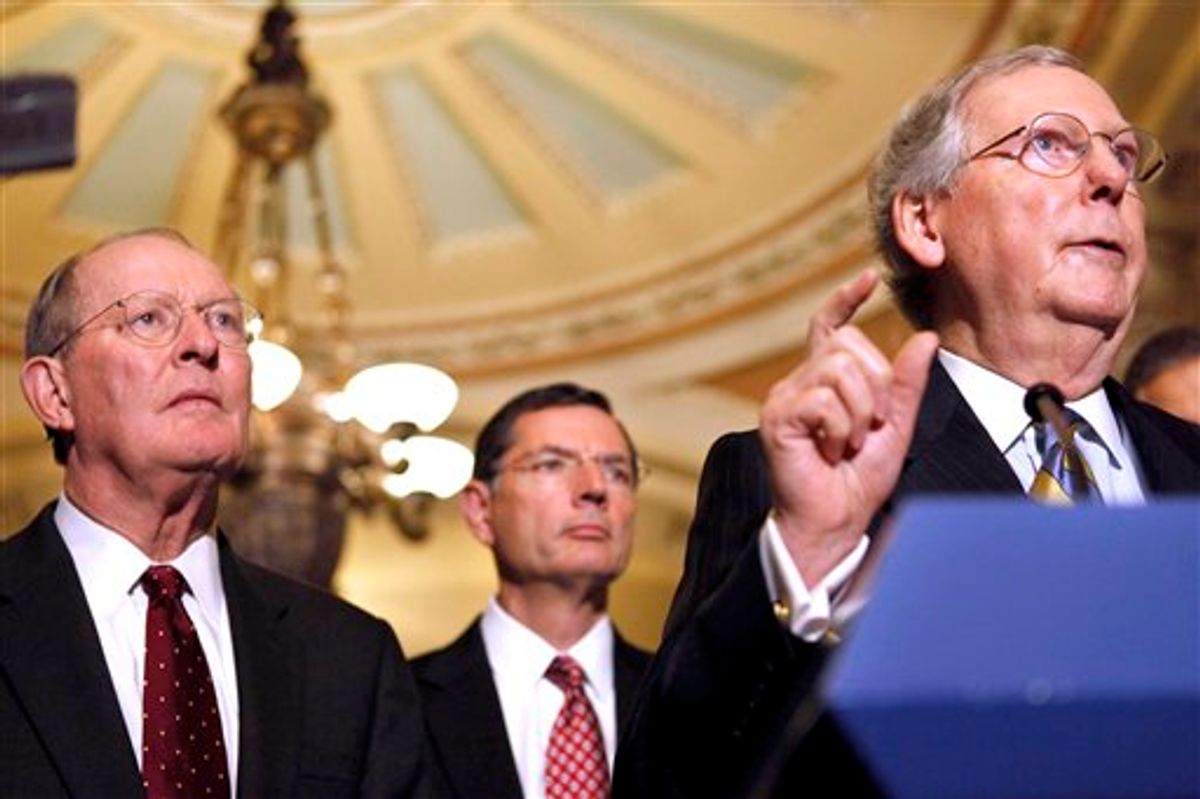 WASHINGTON (AP) — Republicans in the Senate Thursday dealt President Barack Obama the third in a string of defeats on his stimulus-style jobs agenda, blocking a $60 billion measure for building and repairing infrastructure like roads and rail lines.

Supporters of the failed measure said it would have created tens of thousands of construction jobs and lifted the still-struggling economy. But Republicans unanimously opposed it for its tax surcharge on the wealthy and spending totals they said were too high.

The 51-49 vote fell well short of the 60 votes required under Senate procedures to start work on the bill. Every Republican opposed the president, as did Democrat Ben Nelson of Nebraska and former Democrat Joe Lieberman, I-Conn., who still aligns with the party.

Obama's loss was anything but a surprise, but the White House and its Democratic allies continue to press popular ideas from Obama's poll-tested jobs package in what Republicans say is nothing more than a bare-knuckle attempt to gain a political edge by invoking the mantra of jobs but doing little to seek compromise.

"The truth is, Democrats are more interested in building a campaign message than in rebuilding roads and bridges," said Senate GOP Leader Mitch McConnell of Kentucky. "And frankly, the American people deserve a lot better than that."

"Their goal is to do everything they can to drag down this economy, to do anything they can to focus attention negatively on the President of the United States in hopes that he can get my job, perhaps, and that President Obama will be defeated," Reid said. "So let's not talk about campaign speeches here on the Senate floor. Let's talk about reality."

After Republicans blocked Obama's infrastructure plan, the president's Democratic allies immediately turned to kill a competing GOP infrastructure plan that would have extended existing highway and transit spending programs and paid for the spending with a $40 billion cut in unspent funding for other domestic programs.

Obama unveiled his $447 billion jobs plan in September and has launched a campaign-style effort — featuring multiple rallies in states crucial to his reelection bid — to try to get it passed. In votes last month, Republicans blocked the entire $447 billion jobs package and a subsequent attempt by Democrats to pass a $35 billion piece of it aimed at preventing layoffs of teachers and firefighters.

Another political flash point is the way Democrats have sought to pay for Obama's jobs measures — a surcharge on income exceeding $1 million. The idea enjoys wide backing in opinion polls but is stoutly opposed by Republicans, who say it would hit small business owners and therefore threaten job growth.

With the demise of Thursday's measure, an announcement could come as early as Friday on what's the next piece of Obama's jobs agenda to break out for a stand-alone vote. Democratic aides say the next measure would be legislation to provide a $4,800 tax credit for hiring an unemployed veteran and increasing the tax credit for hiring a veteran with a service-related disability to up to $9,600.

Republicans back the idea of the veterans hiring tax credit.

Thursday's legislation would have provided an immediate $50 billion investment in roads, bridges, airports and transit systems. It also called for a $10 billion bank to leverage private and public capital for longer-term infrastructure projects.

The measure would be financed by a 0.7 percent surcharge on income over $1 million.

After Obama's full $447 billion jobs bill was filibustered to death last month, the White House immediately announced it would seek votes on component pieces. That's a way to exert political pressure on Republicans sensitive about their own jobs agenda, which so far has centered on relaxing regulations and boosting offshore oil exploration and drilling.

Obama last week uncorked a "We Can't Wait" initiative that relies on executive authority rather than legislation from a bitterly divided Congress to help homeowners refinance "underwater" homes and give borrowers relief from their student loans.

Meanwhile, House GOP leaders are casting blame on the Senate for failing to act on 15 "forgotten" jobs bills, including a measure to repeal a law requiring federal, state and many local governments to withhold 3 percent of their payments to contractors until their taxes are paid.

Also Thursday, the House approved legislation to allow small companies to sell more shares to potential investors and community banks to increase the number of shareholders they can have before they have to register with the Securities and Exchange Commission.

The bills are part of four measures the House is taking up this week to ease SEC registration rules that have been seen as an impediment to small businesses attracting investors and expanding their operations.

"While the president is out doing campaign events all over the country, what he could do is to actually come to Washington and be focused on trying to help pass bills that would create a better environment for job creation and help put the American people back to work," House Speaker John Boehner, R-Ohio, said.