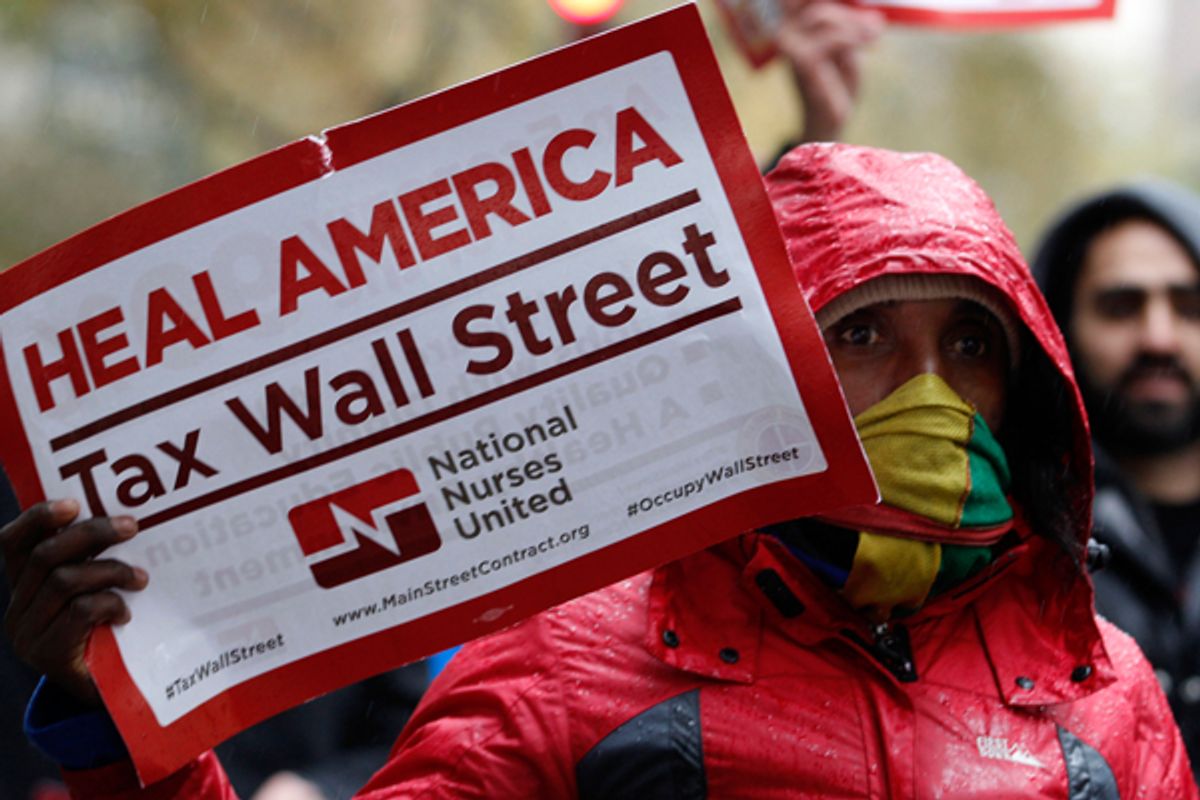 In 2010, Verizon reported an annual profit of nearly $12 billion. The statutory federal corporate income tax rate is 35 percent, so theoretically, Verizon should have owed the IRS around $4.2 billlion. Instead, according to figures compiled by the Center for Tax Justice, the company actually boasted a negative tax liability of $703 million. Verizon ended up making even more money after it calculated its taxes.

Altogether, according to "Corporate Taxpayers & Corporate Tax Dodgers 2008-10," a blockbuster new report  put together by the Citizens for Tax Justice and the Institute on Taxation and Economic Policy that will have you reaching for your hypertension medicine before you finish reading the third page, 37 of the United States' biggest corporations paid zero taxes in 2010. The list is a blue-chip roll-call.

Reading through this report, you will find yourself seized by an irresistible desire to hurl yourself headlong into the nearest OccupyYourLocalCity protest. In an era of crushing government deficits and mass unemployment, corporate America is not only skating blissfully free of its civic responsibilities, but continues to complain that it is paying too much in taxes. Even worse: Congressional Republicans and many Democrats agree! Listening to our politicians talk, you would imagine that corporate America's neck is permanently under the tax man's steel-tipped boot. When, in fact, the exact opposite is the truth.

The list of companies that paid zero taxes is only the beginning of the travesties documented by the report. The authors looked at the tax filings from 2008-2010 of 280 of the nation's biggest, most successful corporations. These companies reported $1.4 trillion worth of profit during a period when most Americans were struggling to stay afloat. The authors discovered that the average effective tax rate -- what the companies really paid after government subsidies, tax breaks and various tax dodges were taken into account -- was only 18.5 percent, less than half the statutory rate. Fully a quarter of the 280 companies paid under 10 percent.

Remember that fact, the next time someone tries to tell you that American corporations pay the highest income taxes in the free world. The only number that counts is the "effective tax rate." One of the interesting tidbits provided by the authors is that in many cases, the tax rate on foreign income for many of these companies is actually higher than the effective U.S. rate.

The most distressing part of the tale is the big picture: The overall trend line is pointed in exactly the wrong direction. If you break out just the years 2009-2010, the effective tax rate was 17.3 percent. "In 2008, 22 companies paid no federal income tax, and got $3.3 billion in tax rebates. In 2010, 37 companies paid no income tax, and got $7.8 billion in rebates." When measured as a percentage of total GDP, over the last three fiscal years, "total corporate income tax payments fell to only 1.16 percent of the GDP ... a new sustained record low since World War II.

How have these companies managed to cut their tax liabilities so far? The answer includes a mixture of targeted tax breaks that impact specific industries or companies, accounting games that corporations play with stock options, and sweeping adjustments to tax law such as changes in the rules in how companies can write off the value of depreciating equipment. The accounting rules for so-called accelerated depreciation are now so accommodating that companies can write off 75 percent of the cost of new equipment immediately.

The companies that pay

However, not all companies are tax dodgers. Of the 280 companies analyzed by the authors, about 25 percent of the total paid close to the statutory rate, a little over 30 percent. But there's no rhyme or reason to who pays or who doesn't.

The authors conclude on a wistful note, with a list of what Washington could do to bring sense and reason to corporate taxation, while providing the government with desperately needed revenue. But as the authors themselves readily acknowledge, their recommendations exist in an alternate universe from the one that we actually happen to live in.

Unfortunately, corporate tax legislation now being promoted by many in Congress seems stuck on the idea that as a group, corporations are now either paying the perfect amount in federal income taxes or are paying too much. Many members of the tax writing committees in Congress seem intent on making changes that would actually make it easier (and more lucrative) for companies to shift taxable profits, and potentially jobs, overseas. Meanwhile, GOP candidates for president are all promoting huge cuts in the corporate tax or, in several cases, even elimination of the corporate income tax entirely.

And that, ultimately, is the most enraging fact about the new report from the Citizens for Tax Justice and the Institute on Taxation and Economic Policy. It won't make a darn bit of difference.