The Zen of Robert California

Taking its cues from James Spader\'s performance, the NBC show has become warm, relaxed and mysterious 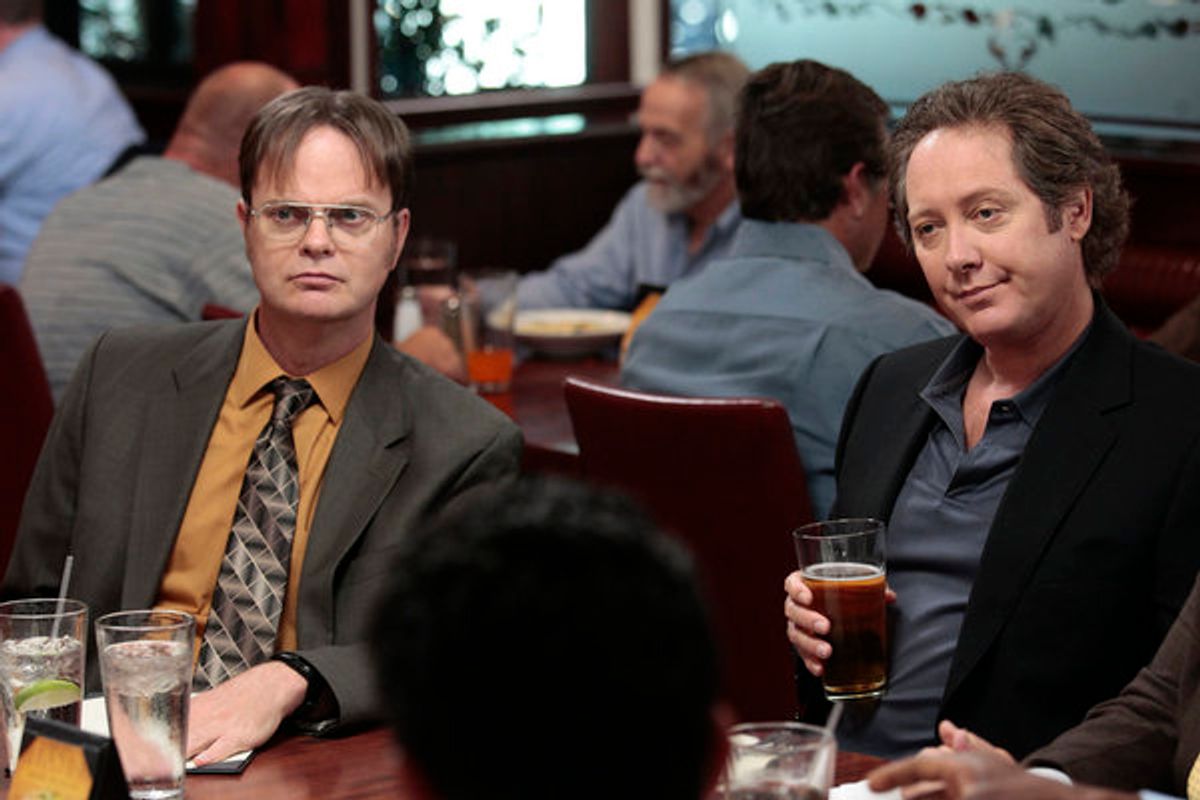 The post-Michael Scott version of "The Office" isn't what I expected, but it's growing on me. First I had to get over the fact that James Spader's character -- Robert California, CEO of Dunder-Mifflin's parent company -- isn't quite the scary, malevolent person I hoped he'd be, based on California's debut in last season's finale and Spader's track record of playing unhinged oddballs. California is a mind-effer, to be sure, but he's more benevolent than expected.

There are times when he casually shatters his employees' confidence simply because he's a powerful man who's used to saying whatever pops into his head without fear of punishment. (When he prompted Andy to talk about his attraction to Erin, and Andy obliged, California cut him off with, "I'm afraid you've lost my interest.") But so far there's no indication that he's anything but fundamentally decent; based on last week's Halloween episode, during which he brought his son to work, he's also a good dad with a deep (if unusual) connection to his child. He's not a craven, impulsive, inadvertently destructive person, as Michael often was. He's wry and aloof. He seems to view the goings-on at the Scranton branch from a lofty perspective -- including the reflexive ass-kissing that greets his every pronouncement, no matter how whimsical or baffling. His visits to the Scranton branch are charged with an excitement that no other regular "Office" character ever summoned, and it's not just because he's the CEO. His peculiar energy sparks love and respect as well as fear. (Andy greeted him by blurting out, "Hi, Dad.")

"The Office" loses something by having Spader's Zen master drive the action instead of Michael Scott. When Michael was running things, the Comedy of Discomfort flowed naturally, but with California in charge, it doesn't -- not quite. And when the series ventures into that old, familiar vein (see the garden party episode, which was more silly than mortifying) the discomfort is mild compared to, say, "Dinner Party" or some other Michael Scott-era exercise in cringe humor. I don't mind, though. Seven seasons of the show showcased enough knife-twisting comedy to last a lifetime. If "The Office" had to continue -- and in a bottom-line sense, it absolutely did -- it would have seemed desperate and pathetic if the producers had replaced Michael with a Michael-esque character. Thankfully, they didn't.

If I had to pick one word to describe the tone of the branch in the months following Michael's exit, it would be "relieved." Everybody just seems more relaxed now, and that's realistic. We've all been in workplace situations where one person -- a co-worker, or worse, a supervisor -- kept us on edge day in and day out, to the point where we forgot what it felt like to not be miserable; when that person left or ceased being a threat, it was as if a great weight had been lifted. Michael's former employees seem more centered now that he's gone. That necessarily eliminates an easy source of excitement, but it also challenges the show to find humor in new places, and gives it a different energy: warmer and more reflective.

The branch's new manager, Andy, is like Michael Scott minus a lot of Michael's destructive jackass qualities. When Andy flails about in his new job, saying or doing ludicrous or ineffectual things, there's never a sense that he's willfully inflicting himself on everyone else as part of a passive-aggressive power trip. (He tried to wriggle out of a bet he made with his employees by phoning the author of a favorite management book for advice on how to get out of "one of those classic ass-tattoo incentive situations.") Everybody knows that Andy means well. They roll their eyes at him, but you never get the sense that they're secretly picturing him being devoured by piranha, which was often the case with Michael. Andy even has the potential to deliver on California's faith in him, a prospect that at first seemed unlikely but is being validated a bit more with each passing week.

The high point of the season to date was "Lotto," the episode in which the warehouse guys won $950,000 in the lottery by playing Daryl's birthday. Daryl, who used to work in the warehouse, became depressed and dared Andy to fire him. The plot challenged both Craig Robinson and Ed Helms to explore previously unseen sides of their characters, and they responded with their subtlest, deepest acting to date. Robinson's depiction of Daryl's existential crisis was more alarming than funny; it was a dramatic turn, really -- a sketch of a man suffering an instantaneous midlife crisis, cratering before our eyes. Andy halted Daryl's doom spiral with a brilliantly written (by Charlie Grandy) recitation of all the ways in which Daryl had failed to deliver on the promise that prompted the parent company's previous CEO, Jo (Kathy Bates), to take him out of the warehouse and put him in management. It was a tough love speech, unflattering but honest and caring. It could only have come from a boss who pays closer attention to his employees than they realize.

One of the more curious tics of the new "Office" is the tendency to have Robert California end episodes with a ruminating free-form monologue about human nature. Sometimes they're freestanding and delivered in-the-moment -- see California's brilliant "horror story" from the Halloween episode -- but they're more often intercut with images of the staff. The result often has the feel of a home movie, or maybe a wildlife documentary. "Fear plays an interesting role in our lives," California said in the closing section of the Halloween episode, over shots of the staff in their holiday garb. "How dare we let it motivate us. How dare we let it into our decision-making, into our livelihoods, into our relationships. It's funny, isn't it? We take a day a year to dress up in costumes and celebrate fear."

These monologues take the place of the songs that often ended episodes in the Michael years. California is the all-seeing, all-knowing narrator who puts things in perspective. The device could seem cutesy or reductive, but it usually doesn't. Why? Maybe it's because it's Spader doing the talking. A lifetime of moviegoing has conditioned us to assume that anything a Spader character says, however kooky, is intelligent and deserves a fair hearing. Spader's birdlike body language, deep tenor voice, and Gatsby-like demeanor dry out any incipient moistness. California just seems like a more evolved person than anyone else on the show, so it's only natural that we'd be receptive to whatever wisdom he wants to impart. "He creeps me out," Jim said in the search committee episode, "but I think he's a genius."