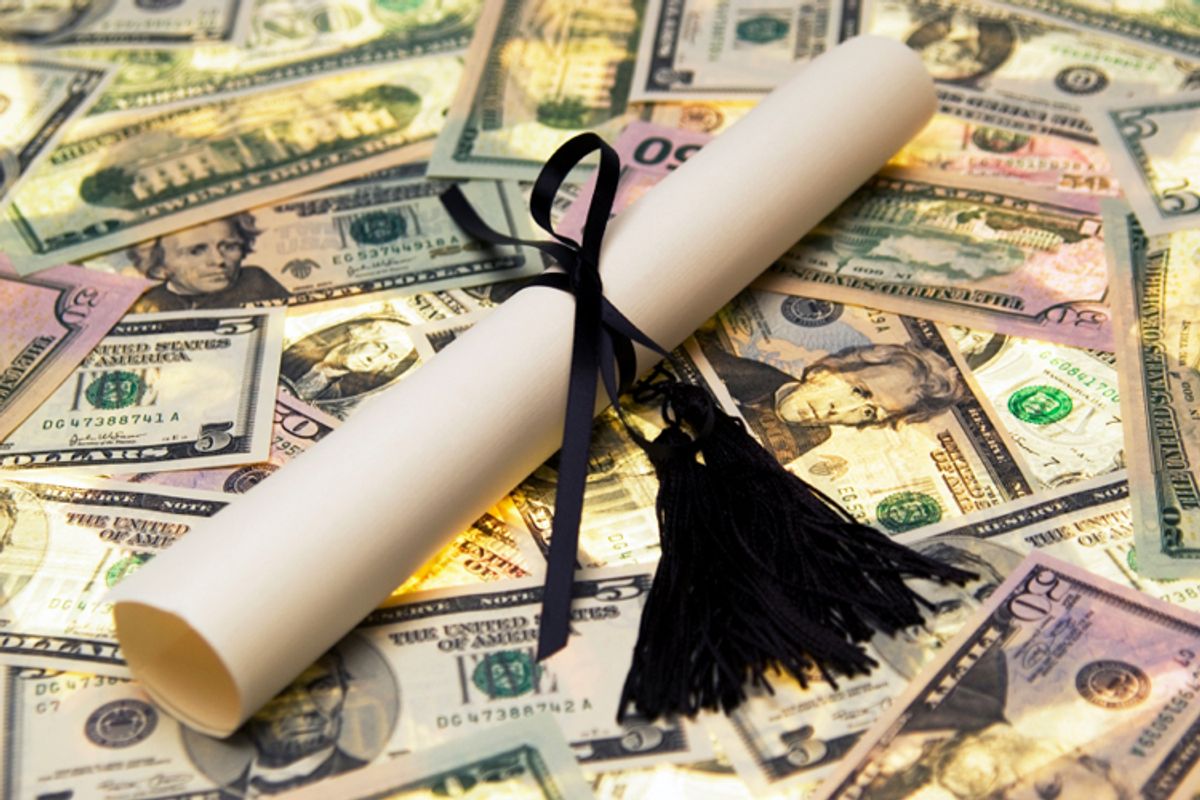 A week ago , President Obama unveiled a series of executive orders to address the ever-growing student loan debt crisis in America.  Billed by the White House as a direct response to a petition I created on the White House's new "We the People" petition site, the president announced the  implementation of already-passed changes to the government's student loan program.

The changes could be found in the fine print. The Income Based Repayment (IBR) program included in last year's Affordable Care Act would be moved up from 2014 to 2012. And certain types of federal loans would be eligible for consolidation and enrollment in IBR.  That was it.  That was the entirety of the president's  response to a petition signed by over 30,000 Americans calling for across-the-board student loan forgiveness as a means of economic stimulus.  Obama also announced the creation of a new form that would allow people to calculate their educational costs and repayment obligations.  Inspirational? Hardly.

Here's the problem: there's only so much the president can do on his own without a Congress willing to do the job it was elected to do.  So while I was disappointed by just how little the president's new initiative would help the vast majority of Americans drowning in student loan debt, I was encouraged by the fact that he at least acknowledged the problem: a $1 trillion student loan debt overhang that isn't going away any time soon.

In fact, it's growing larger by the day, and its effects are be felt by everyone.  President Obama's inability to adequately address the concerns raised by those who signed the We the People petition (not to mention the over 651,000 people who've signed the same basic petition I created on MoveOn.org's new petition site, SignOn.org) highlights the limits of unilateral executive power. The president can be criticized for being tone-deaf to the needs of the people, but I think that criticism is more appropriately reserved for the do-nothing 112th Congress. But I digress.

The movement to forgive student loan debt as a means of economic stimulus started out by accident, prompted by an essay I wrote in January 2009 as I was watching cable news coverage of the debate over the proposed "Obama Stimulus Plan."  A mere nine days after the inauguration of a man ushered into office on a platform of "hope and change," yet, there we were, having the same tired old debate over tax cuts, corporate welfare and the demonstrably failed ideology of trickle-down economics.

As someone who has student loan debt myself, it occurred to me that if I were suddenly relieved of my obligation to repay the approximately $500 in student loan payments that I dutifully make each and every month without fail, I'd have an extra $500 per month, every month, to spend on ailing sectors of the economy.  Think of it as a trickle-up approach to economic stimulus.

My point in writing the essay wasn't to say that I didn't want to pay back what I had borrowed. Rather, it was to say that if we truly wanted to stimulate economic growth, I had a better, more efficient way of accomplishing that goal.

The president's new "Pay as You Earn" initiative is unlikely to help very many people for several reasons.

First, the IBR repayment plan is available only to those with federal loans.  Those drowning in private student loan debt, which often carries usurious interest rates and exceedingly few good options for anyone experiencing any sort of trouble repaying their loans, are ineligible.

Second, one of the requirements for eligibility for IBR is that you must be current on your repayments.  Those who aren't current on their repayments, almost by definition, need the additional help now, arguably even more than those who are current.  Asking them to repay thousands of dollars on their student loans before they can even apply for this "help" is like a hospital telling a gunshot wound victim that he has to remove the bullet himself, before the hospital will consider whether to stop the bleeding.

Contrary to what the regressive right would have you believe, the calls for student loan forgiveness are not about a generation of self-entitled, pot-smoking, lazy deadbeats looking for a handout.  It's about restoring some semblance of sanity to the student lending industry that has made a mockery of the very objective behind obtaining a higher education in the first place.

Generally speaking, the whole purpose of obtaining a higher education is to get further ahead in life; to better contribute to society; to be successful and to share the spoils of that success with the next generation.  If we're routinely failing to accomplish any of those goals, and if millions of Americans are graduating into much worse financial positions than they otherwise would have been in had they never chosen to go to school at all, then what is the point of seeking out a higher education at all?

Sadly, from the perspective of the student loan industry, the point is to rake in hundreds of billions of dollars by preying upon the youngest, least financially savvy and most economically vulnerable among us by continuing to advance the farce of the so-called American dream that's been slowly but surely slipping away since the 1980s.

Saddling entire generations of current and former students with massive educational debt comes with huge opportunity costs.  As a result, the "educated poor" are not buying homes, not starting businesses or families, not inventing, investing or innovating and otherwise engaging in economically productive activities we need all Americans to be doing right now if we're ever to dig ourselves out of the hole created by the greed of those at the top.

And, let me be clear about who the "educated poor" really are.  Yes, some of them are recent college grads and 20-somethings, but just as many are in their 30s, 40s, 50s and beyond -- people who have paid for their educations several times over but who still have balances in the tens of thousands of dollars.

Don't believe me?  Check out the new website, OccupyStudentDebt.com, that my organization, ForgiveStudentLoanDebt.com, is undertaking with the folks behind the film "Default: The Student Loan Documentary" (premiering this month on PBS; check your local listings).  Relieving these taxpaying Americans of their student loan debt obligations would usher in an era of broad-based entrepreneurship, innovation and prosperity.

Unfortunately, the top 1 percent and their cheerleaders on the right would rather focus on how "unfair" such a proposal is, as if the situation their policies have created is in any way "fair" to the millions of Americans holding student loan debts.  Their narrow-minded, ill-informed reactions can be summed up with a familiar phrase: "I got mine, Jack, so screw you!"

The heart of the problem

Student loans themselves are the problem.  A well-intentioned program designed to give access to higher education to those who could otherwise not afford one has had the (unintended?) consequence of turning education into a commodity with highly disturbing parallels to the subprime mortgage mess.  With so much seemingly free money flooding the system in the form of student loans, anyone with a pulse and a desire to obtain a higher education can avail themselves of a loan. As tuition rates have soared, the very same degrees that now cost nearly five times the amount they did a just a few decades ago are worth significantly less in today's decimated job market.

The sad but undeniable truth is that, through student loans, we've shifted all of the burdens not only of obtaining an education but of maintaining a bloated educational system down the socioeconomic ladder on those who can least afford to shoulder the costs.

Then, once they graduate, we expect them to repay hundreds and, oftentimes, thousands of dollars per month in student loan repayments, despite approximately five applicants for every job opening and despite the fact that middle-class wages have gone down, not up, over the last 10 years.

Is it any wonder that so many people find themselves in financial trouble, causing a downward spiral of debt from which there is almost no escape?  Student loans have been stripped of nearly all basic consumer protections such as bankruptcy and statutes of limitations, thereby eliminating any risk on the part of the lenders in issuing these loans.

What can be done

So, where does all of this leave us? With #Occupy protests spreading to every major city all across the country, clamoring for student loan forgiveness (among other demands), hundreds of thousands of people energized and mobilized for a long, hard fight. One member of Congress, Rep. Hansen Clarke, D-Mich, has even introduced a House resolution calling on Congress to endorse the idea of reducing home mortgage balances and student loan debt.

We need a Congress willing to work with the president on easing the enormous burdens faced by millions of Americans who find themselves in such dire straits because they made the decision to better themselves through higher education.

There's a whole host of things that Congress and the president can and should do right away. I continue to think across-the-board student loan forgiveness will provide a sustained economic stimulus for the next 20-30 years, and reaffirm that an education is something actually worth pursuing.

But short of that there is no good reason why anyone should be able to have his or her gambling debts discharged or restructured in bankruptcy, but not their student loans.

There is no good reason why the collections of student loans shouldn't be subject to statutes of limitations, just as any other cause of action, civil or criminal (other than murder), is subject to.

And there is no good reason why banks and other financial institutions can avail themselves of low- or no-interest government loans while students must borrow at interest rates of 6.8 percent or more just to obtain an education.

No other industrialized country in the world treats education and the financing thereof the way we do here in America and few sane people would argue that this is the best we can do.  But without a Congress willing to do its job, initiatives such as what the president unveiled last week are pretty much the best we can hope for, which is to say, not a whole lot.