Why college football is better than the pros 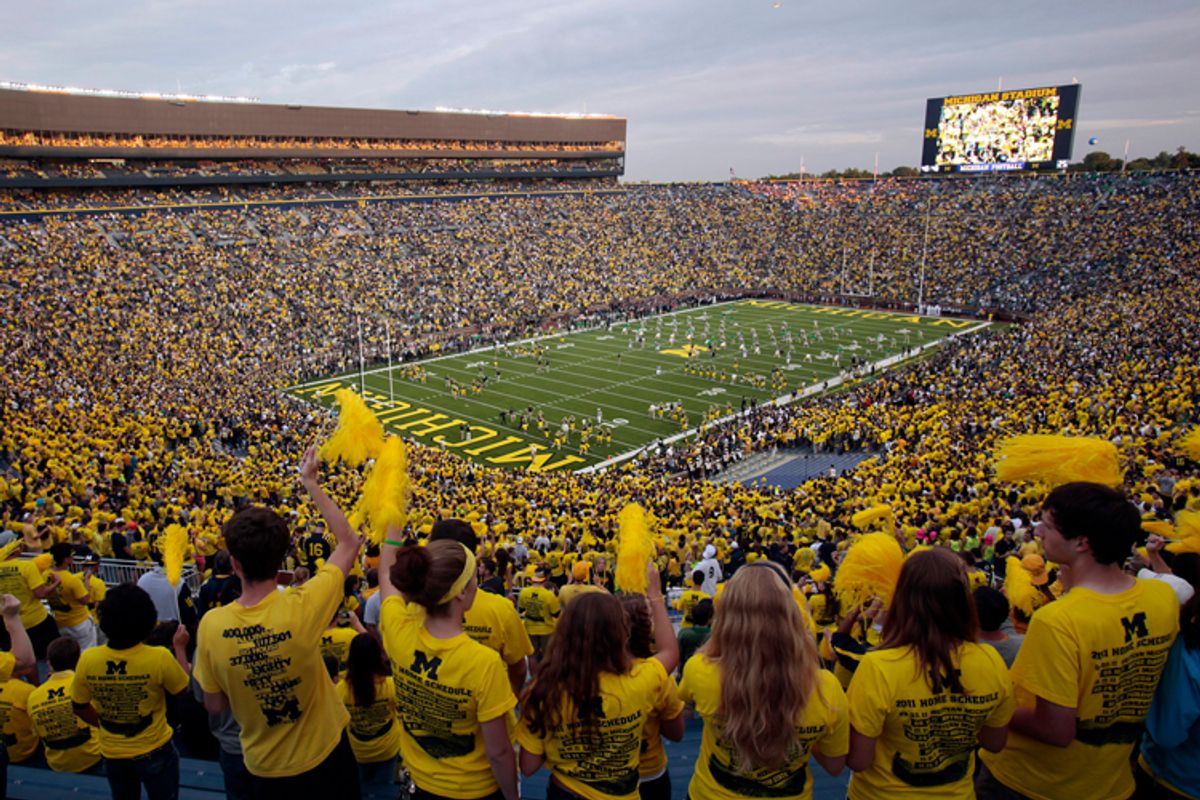 Michigan Stadium is seen before the start of the NCAA college football game between Michigan and Notre Dame in Ann Arbor, Michigan September 10, 2011. (Rebecca Cook / Reuters)
--

It wasn’t easy explaining to my father’s family in New Jersey what it was like to be in Alabama on the weekend of a big game, like when Alabama played Louisiana State -- as they will this Saturday night -- or when the Crimson Tide battled Tennessee or Auburn. During an Auburn game, as Geoffrey Norman wrote in his book "Alabama Showdown," “One or two people every year die of a heart attack right there in Legion Field. The better the game, the more people who die.”

People from Texas understood what he meant; it was like when the University of Texas played Texas A&M or Oklahoma. To Oklahomans, it was like when their Sooners play Texas or Nebraska. People from Michigan and Ohio understood -- it was like when Michigan played Ohio State, and they had to pass out fliers to fans of the visiting team advising “Wear jackets over your team colors and don’t take them off until seated.” (The same flier suggested driving across the state line in a rental car with neutral-state license plates.)

In New Jersey, though, there were no ready comparisons, nor, for that matter, in New York, where most fans think college football is something played somewhere west of the Hudson River and most sportswriters see college football as a mere appendage to the pro game. What a shock they would have should they ever cross the river and find out that for the vast majority of Americans, college football is football.

This Saturday, nobody in Alabama or Louisiana is going to get married, and somebody is going to die.

This year’s Alabama-LSU game is the latest in a college football tradition that falls under the category of the "Game of the Century.” Occasionally you’ll hear football fans argue over which game is superior, college or pro. This is really not a debate to be taken seriously. The only people who think professional football is better than college football are people who don’t follow college football. Put it this way: Pro football exists because of college  football; the college game is the dog -- or dawg, as they spell it down South -- to which the pro game is the tail.

Don’t tell me about the ratings for this or that Super Bowl. That’s all pro football is to most Americans: a long-running television show. Ask the fans of any major college program in the country -- Penn State, Southern Cal, Notre Dame, Arizona State, Florida, Oregon, Boise State, Michigan State or any of four or five other dozen schools --  if they’d rather see their team win their Big Game or have their favorite pro football team win the Super Bowl. You’ll discover very quickly that the pro game takes a seat in the back corner of the end zone. The dean of college football writers, Dan Jenkins, nailed down what makes college football the greater game in his 1970 book "Saturday’s America": “Tradition and rivalry, words that belong almost exclusively  to the vernacular of college football -- old as the two words are, they are irreplaceable, for it is what they suggest that specifically separates the college game from that of the pros. Sophisticates … may not like it, but college football is Michigan playing Minnesota for the Little Brown Jug, a street brawl in downtown Dallas the night before the Texas-Oklahoma game, a thousand white Annapolis caps spraying into the air above Philadelphia’s John F. Kennedy Stadium, and that annual Wall Street Block Party and Raccoon Coat Parade known as the  Yale-Harvard game.” In pro football, tradition means that some fans can still remember the score of the last Super Bowl.

Rivalry? In the pros, rivalry means whatever teams happen to be winning this season.  If you want to learn the real meaning of the word, watch Alabama and LSU this Saturday night; you’ll experience firsthand the kind of real enthusiasm, a barbaric yawp of the kind that Whitman would have recognized. It's the lifeblood of college football, a feeling that can only be imitated in pro football stadiums. In the NFL, football players are mercenaries; in college football, they are folk heroes.

The heart of football is college football, and the heart of college football is the Southeastern Conference. Since it was first established in 1933, an SEC team has claimed all or at least part of the national championship 34 times in 77 seasons. An SEC team has the title outright for the last five seasons and almost certainly will take it again this year. Going into this game, LSU is 7-0 and ranked No. 1 while Alabama is also 7-0 and ranked No. 2 (though the Crimson Tide is a five-point betting favorite). The winner will be heavily favored to finish the regular season unbeaten, win the conference championship and then walk over whoever – Stanford, Boise State, Oklahoma or anyone else unlucky enough to have to face them – in the BCS title game in January.

Games of the Century come in several varieties. Some fans like intersectional rivalries that involve the two best teams in the  country. These almost always happen in postseason bowl games such as the Miami-Nebraska Orange Bowl classic on Jan. 2, 1984, in which the once-beaten Miami Hurricanes held off the Nebraska Cornhuskers 31-30, sealing the victory, literally, by stopping Nebraska on the last play of the game.

For some purists, though, The Game must be between undefeated teams, like the Nov. 9, 1946, Army-Notre Dame game at Yankee Stadium in which three Heisman Trophy winners – Glenn Davis and Doc Blanchard for Army and Johnny Lujack for Notre Dame – failed to produce a single point as the game ended in a 0-0 tie. Twenty seasons later, in 1966, on Nov. 19, 1966, No. 1 Notre Dame and No. 2 Michigan State played to a hugely controversial 10-10 tie at East Lansing, Mich. -- controversial because onlookers thought the Fighting Irish should have tried harder near the end of the game to win instead of settling for a tie.

But for the purists of purists, such as myself, the only true Game of the Century can be between teams that are, first, unbeaten; second, ranked No. 1 and 2; third, are traditional rivals; and four, are out to settle the issue in a regular season clash. By those criteria, only the legendary Thanksgiving Day 1971 match between No. 1 Nebraska and No. 2 Oklahoma, won by the Cornhuskers in the final minute, 35-31, qualifies as the real thing. Until this Saturday night, that is. Whatever definition one gives the Game of the Century, though, it must meet one golden standard: It has to be a college game.