I saw a different side of Occupy Oakland

Before the late night violence, I went to a friendly protest that peacefully closed banks and the city's port 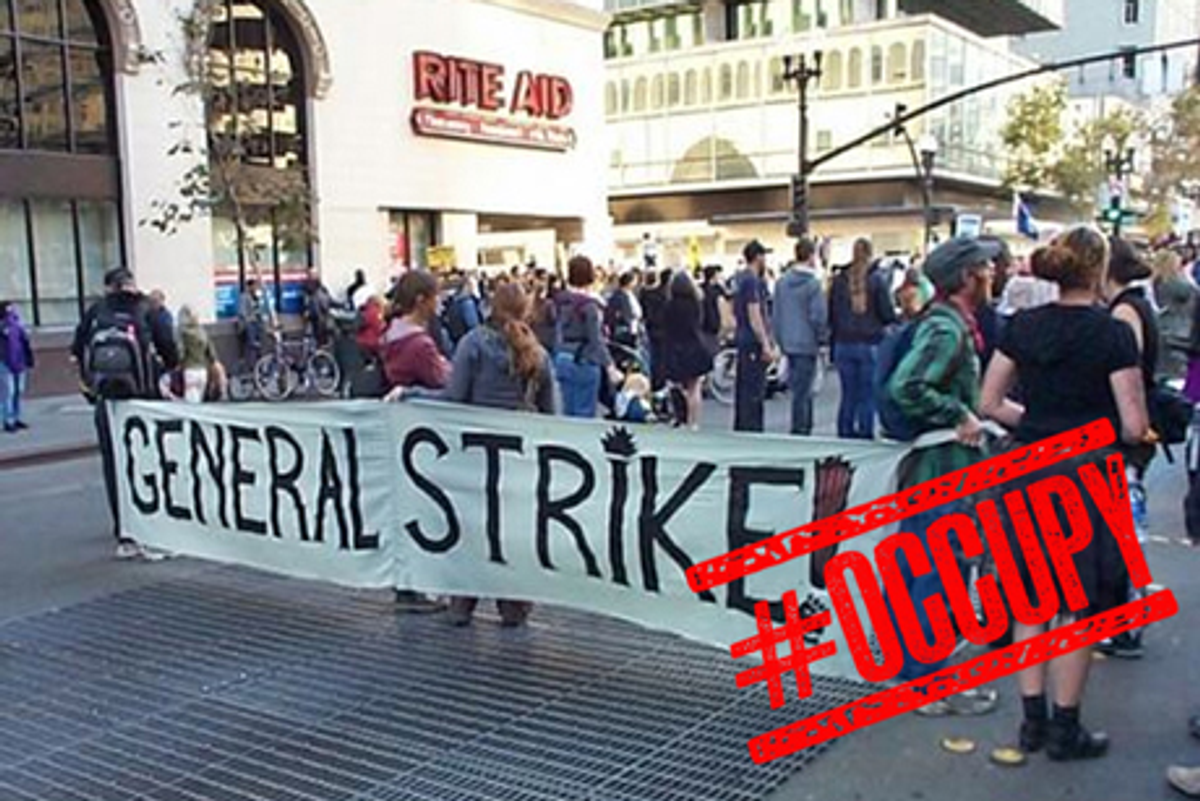 Tuesday night the wind was whipping around Oakland in an ominous way. Doors kept banging around in my apartment, and I fell asleep hoping nature wasn't setting things up for another difficult day. I woke Wednesday morning ready to go to the Occupy Oakland General Strike, and the weather had calmed down, it had become one of those remarkable warm fall days we sometimes get here.

And it was Wednesday's weather that set the stage for my experience of the day, a beautiful day that Oakland and I needed so much after last week's troubled times.

Later that night, I saw on the news a few regrettable incidents of windows being broken, which made me sad. Not so much because of the windows, even though that's not a good thing, but because now that the world was watching us, this would be the first thing many would see and take note of. I saw film of the vandals at Whole Foods. It looked like a small contingent of anarchists, and there was also footage of protestors trying to stop them.

The reporter on our local Channel 2 said that 99 percent of the people he saw were mellow, and called the troublemaker anarchists a small element. Mayor Jean Quan said this was a good day for the protestors.

My experience of the day was one of peace, of determined protest, and of many people who conducted themselves with integrity and honor. I don't know if I've ever been in a friendlier crowd, this was Oakland at its most Oakland-like self.

There was hardly any police presence when I was there (I was home by 9 pm that night). I saw a couple of handfuls of motorcycle cops, one possible police helicopter. I would guess there were a lot more somewhere, but I did not see them. No riot police.

I think the crowd estimates I've seen of 4,500 people are low. My guesses are usually lower than the news estimates, but I'm thinking closer to 10,000. Possibly more when you add up all the day's activities. But I'm not a crowd-counting expert.

I arrived downtown around 10 AM on Wednesday. I followed a march that wandered for a while before coming to several banks. Those banks locked the doors and closed up. I met a man who was sitting in front of the ATMs at CitiBank named Eric. I interviewed him briefly, and then he asked if I wanted to go shut down the Bank Of America farther away near Lake Merritt. For some reason I just said yes, and followed him. Eric told a young woman Cathy about the plan, and she joined in, and got it to be announced where announcements were being made over a megaphone.

Unfortunately not many people were coming over, but Eric marched on a bit anyway. Cathy and I convinced him to wait and let us go find some more people to join in. It took some work, but eventually we gathered about 20 people. So on we marched, probably about eight blocks. We walked up to the bank, the bank locked its doors, and really, it shut itself down. There were a few customers inside and they got escorted out a back door.

We stayed about 45 minutes, maybe an hour. Then we felt it was time to move on; the statement had been made. I made fast friends with Eric and Cathy; I think all three of us had a great, memorable time. We walked back, hung out for awhile. Then I needed to go home for a break. Cathy needed to go pick her kids up from school. Eric went to close down more banks.

The March on the Port of Oakland

I went back at 4:30 to join the march to the docks at the Port of Oakland. Our port is one of the five busiest in the country, so this was a big deal. Though the local unions didn't call a strike, they offered their support and blessings to this action.

Along the way I met an awesome woman named Leigh, a member of the Electricians Union. Once again I was given the gift of a quick and nice friendship, and we marched the two miles together and then back to the West Oakland Bart station.

At one point we sat down on an overpass and watched an endless line of Occupiers walk by. Every single person I saw was well behaved and good-natured. When we got to the docks, there was a party atmosphere. A band was playing with amps powered by people on Exercycles. I turned and said hi to a young woman next to me, and we had a nice talk about what a great day it had been.

After what happened to me the week before, I needed the peaceful experience I had on Wednesday. I'd ended up sinking this past weekend into a rarely seen victim mode, blaming myself for being assaulted and teargassed, feeling ashamed for getting attention for that. It felt good and healing to come out of hiding, and to see the kindness this world can be capable of.

When I left, Oakland was still mostly in a state of peace, although I'd seen rumors on Twitter of police gathering. I knew the strike and protests were supposed to continue for a while, possibly reconvening at the docks at 3 AM. But my day of striking was over. I needed to lay down and get a lot of rest.

I prayed I wouldn't wake up in the middle of the night to the sound of a text message alerting me of another police action. I prayed there would be no more vandalism; I prayed that the peaceful spirit I saw all day would prevail throughout the night. And that it would prevail for the duration of this protest, this Occupation in my hometown that I love so much, this Occupation that I hope endures and steers us onto the road of change we've been afraid to travel for far too long.

At 2 AM Thursday morning, the things I feared happened. I woke to a text message alert that police were moving in. There was tear gas, rubber bullets, around 100 arrested. I watched a live feed briefly; I could not stand to watch any longer.

Once again, it was a large coalition of various police forces. According to reports on local news stations the problems were caused by a splinter group, the police acknowledge it was a minority of Occupy Oakland. The first incident I've heard of was a group taking over an abandoned building.

Sometime after that, a splinter group turned violent, throwing things, breaking windows and spraying graffiti all over downtown. The pictures on the TV of the graffiti are extensive. What happened is being called a riot. I'm saddened that this was what the world saw on Thursday.

None of this will change the goodness of all the Cathys, Erics and Leighs I've met, the feeling of walking with many thousand of them, the goodness inside most people that I hope can endure these acts of harm, wherever they come from.

I later went to survey the damage, and to see what was being done. City workers, business owners and Occupiers had been working through the morning to restore things. A lot of progress had been made. The picture below is of two of the Occupiers getting ready to start painting over graffiti. I heard that the Occupiers are talking about how to deal with this sort of thing in the future, and what can be done to deal with what happened Wednesday night.