The painful demise of a Wall Street Democrat 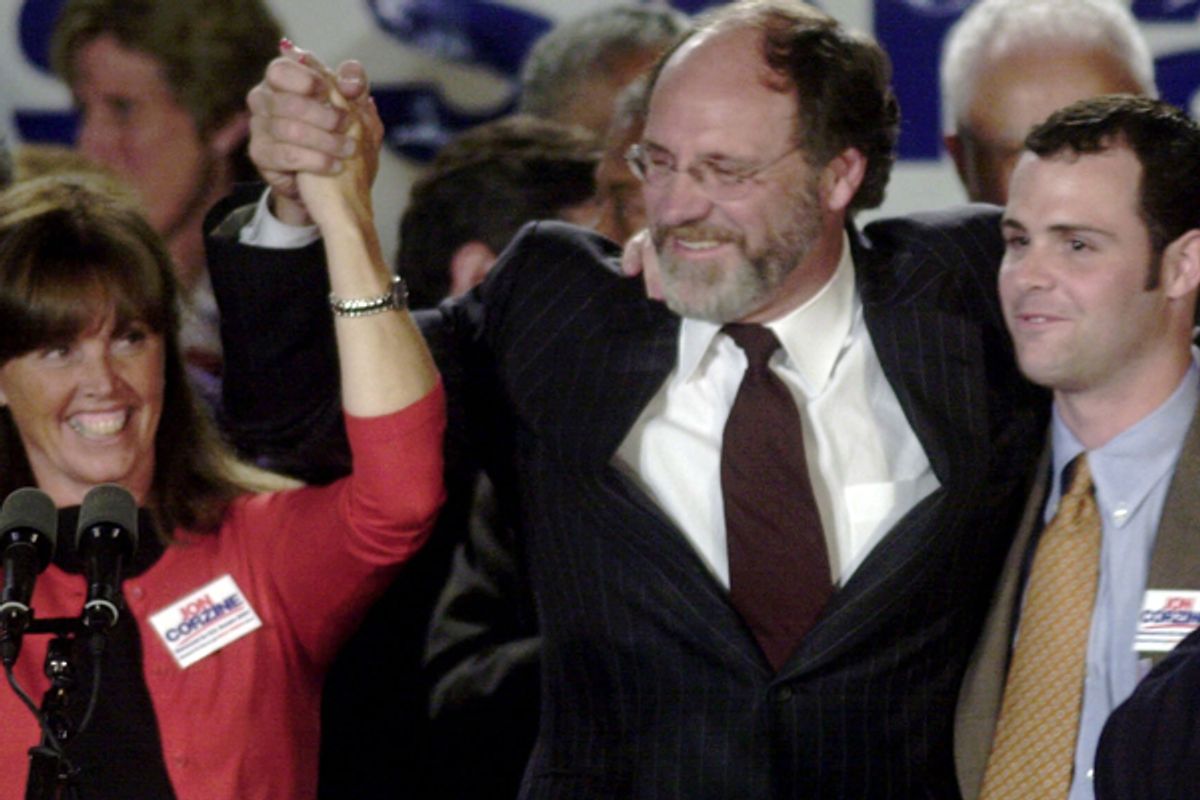 Jon Corzine celebrates his victory in the Democratic primary for the U.S. Senate in 2000. (AP)
--

Jon Corzine, who resigned today from MF Global, the bankrupt brokerage house he took charge of after leaving New Jersey’s governorship, did have a day like this once before on Wall Street. It came on January 11, 1999, when a Goldman Sachs executive named Henry Paulson won a bitter power struggle by convincing the firm’s executive board to oust Corzine as its chairman and co-chief executive.

Finance was the only life that Corzine, who had started out as a bond trader and clawed his way to the top of the world’s largest investment bank, had known. But that didn’t keep him from eyeing another grand arena for his next act: That Wall Street resume -- and the bulging personal net worth it had produced – was precisely what the Democratic Party of the late-1990s was looking for.

Under Bill Clinton, Democrats had forged what seemed to be a winning political alliance with Wall Street, pursuing fiscal policies that largely pleased the financial industry while reaping a campaign cash windfall. Much of the credit for the boom economy of the Clinton years was given to Robert Rubin, who was lured away from Goldman Sachs to run the Treasury department in 1994. Rubin had been Corzine’s mentor at Goldman and had also introduced him to the elites of the Democratic Party, with Corzine donating around $1 million during his Goldman years to candidates and party committees at the federal level.

Thus, the timing of his Goldman humiliation was actually fortuitous, because just as he was being shown the door, one of New Jersey’s two senators, Frank R. Lautenberg, was getting ready to call it quits. Corzine lived in the tony suburb of Summit, but he was a stranger to the Garden State’s quirky and parochial political culture; all of his activity had been at the national level. But there was a link: The state’s other senator, Robert Torricelli, was chairing the Democratic Senatorial Campaign Committee for the 2000 cycle – and he’d been cultivating Corzine for years.

For Torricelli, Corzine met two needs. With his enormous personal fortune, he’d be able to fund his own campaign, freeing the DSCC from having to expend its precious resources on the pricey New York and Philadelphia airwaves.  (Several other personally wealthy Democrats, like Maria Cantwell and Mark Dayton, also ran for the Senate in 2000.)

But there was also a Jersey angle: James J. Florio, who had served as governor from 1989 to 1993, had announced that he’d seek a comeback, and with his name recognition, he’d be the clear favorite in the Democratic primary for Lautenberg's seat. And Florio, who had represented South Jersey in the House for eight terms before winning the governorship, gave party leaders – particularly in the northern part of the state – the jitters.

As governor, he’d enacted a $2.8 billion tax increase that set off a tax revolt and devastated the state’s Democratic Party in the early 1990s. At one point, Florio’s approval rating had dipped to 15 percent, although he did stage a remarkable recovery and came within a fraction of a point of fending off Christine Todd Whitman and winning a second term in ’93. Still, Democratic leaders feared that memories of the tax hike would cost him – and them – dearly if Florio ran as their Senate candidate in 2000.

The joke is that Corzine’s 2000 campaign was the single best employment program in the state. Anyone in Democratic politics who wanted a job could get one. Any Democratic organization willing to sign on could look forward to a hefty check of its own. Officially, Corzine spent $35 million on the primary alone – and there are Democrats who still swear the real number was much, much higher. By all accounts, Florio wiped the floor with Corzine every time they debated, something that probably impressed the four- or five-dozen people who were watching. Meanwhile, the hundreds of thousands of New Jerseyeans who watched network television were treated to a parade of slick Corzine ads. The primary was a rout: Corzine won by 16 points.

There was a moment in the fall when things got scary for Corzine. Pitted against Rep. Robert Franks, a moderate congressman with a good government message who also claimed Summit as his hometown, Corzine’s free-spending became an issue. Franks framed the election as a referendum on Corzine’s attempt to buy it. At the presidential level, Al Gore was crushing George W. Bush in the state, but the Senate race got tighter and tighter as the campaign progressed. The New York Times even weighed in with a surprise endorsement of Franks, arguing that “if political philosophy were the only consideration, we would be for Mr. Corzine. But the more responsible way that Mr. Franks has conducted his campaign, in combination with an acceptably moderate record, has earned our endorsement.”

In the race’s final weekend, Franks caught Corzine in the polls, but the top-of-the-ticket drag from Bush proved too much on Election Day, and Corzine prevailed by three points. Franks had won the campaign, just not the election.

In the Senate, Corzine’s Wall Street ties quickly proved an asset. Just two years into his term, Democratic leader Tom Daschle picked him to run the DSCC. The party had just lost its narrow majority in the 2002 midterms and hopes were high that Corzine, with his access to so many elite donors, might lead a comeback in 2004. But it was a tough assignment, with the retirements of five Southern Democrats making Democratic gains all but impossible. Corzine won generally positive reviews for his stewardship of the committee, even if Republicans ended up picking up four new seats.

But by the time Election Day rolled around, Corzine was already over Washington. He was anxious to climb the ladder in politics, and spending years as a junior member of the Senate wasn’t going to get him where he wanted to go. The New Jersey governorship, though, was a different matter. The only problem: The office already belonged to a Democrat, Jim McGreevey. But McGreevey had serious problems, with missteps, ethics scandals and even a federal investigation dropping his poll numbers and stirring talk that Democrats might want to dump him in 2005 – if only they could find a consensus alternative. Quietly in 2003 and early 2004, Corzine’s camp let it be known that he’d be willing to play the white knight role, if it came to it.

It ended up being easy. Seemingly out of nowhere, McGreevey announced in August 2004 that he was being blackmailed by his former gay lover – a man he’d appointed to run the state’s homeland security agency despite his utter lack of qualifications – and resigned. Corzine tried to push McGreevey into giving up his job on the spot, so that a special election could be held in November ’04. The state’s Democratic bosses, all of whom had long since learned that playing along with Corzine would mean perpetually flush coffers for their own organizations, were with him.

McGreevey, tired of being pushed around by the same bosses, resisted and declared that he’d stay for three more months – meaning there’d be no special election. Instead, there’d be an acting governor, Richard J. Codey, the wry, self-deprecating president of the state Senate. Codey was a hit with the public, but the bosses reviled him and it took too long for his popularity to build. He wanted to run for a full term in the 2005 election, but in January of that year, Corzine called in all of his favors and lined up all of the state’s major county Democratic organizations. (In one notorious episode, he even used his 89-year-old mother, who lived in Illinois, to donate $37,000 to the Bergen County Democratic Organization.)

Codey backed down, the primary became a lay-up for Corzine, and the general election wasn’t much tougher. The roughest moment came when Corzine’s ex-wife, whom he’d left after entering politics, bitterly told the New York Times that he "let his family down, and he'll probably let New Jersey down, too.” Her words were used in a desperate last-minute ad from Corzine’s Republican opponent, Douglas Forrester. But it had no apparent effect, and Corzine was elected by a ten-point margin.

It was hard to spend much time around Corzine enthusiasts in those days without someone pointing out that the road to the White House runs through America’s State Houses. Corzine, it was said, would demonstrate the value of his Wall Street background in tackling the Garden State’s enormous fiscal problems, setting him up for a storybook redemption: The man who’d been dumped by Goldman Sachs would seek the presidency – and win it.

But it was pretty much all downhill from there, thanks in no small part to Corzine’s old friends in high finance. Here you can actually draw a direct line between the making an unmaking of Corzine’s political career. It was, after all, his Goldman background and his ties to Rubin that made him so attractive to Democrats in the first place. And it was in the same year that Corzine launched his Senate campaign that Rubin helped push through the repeal of the Glass-Steagall Act, which ended the separation between commercial and investment banking – and laid the groundwork for many of the excesses that led to Wall Street’s meltdown in 2008. And it was the miserable, rotten economy produced by that meltdown that helped doom Corzine’s reelection campaign in 2009.

It takes an awful lot for a Democrat to lose in New Jersey, which last sent a Republican to the Senate in 1972 and which last supported the GOP’s presidential nominee in 1988. In fact, prior to 2009, Republicans had in the previous 36 years won just one statewide election by more than a point. But Corzine fell to Chris Christie by nearly four points, a landslide by Garden State standards. And while the economy wasn’t the only reason – Corzine’s popularity had been mediocre for much of his term, during which he’d faced his share of humbling setbacks – it’s still hard to imagine him losing in ’09 if popular anxiety hadn’t been so high.

And now Corzine’s latest quest for redemption has come to a painful end as well, with reports of missing money and a possible federal investigation. He’s 64 years old now, and there may actually be another opening on the horizon in New Jersey politics: Lautenberg, who returned from his brief retirement in 2002, could retire from the Senate in 2014, when he’ll be 90. But if he does, here’s guessing Democrats will look to someone besides Jon Corzine this time.