The crepes that crossed the Atlantic 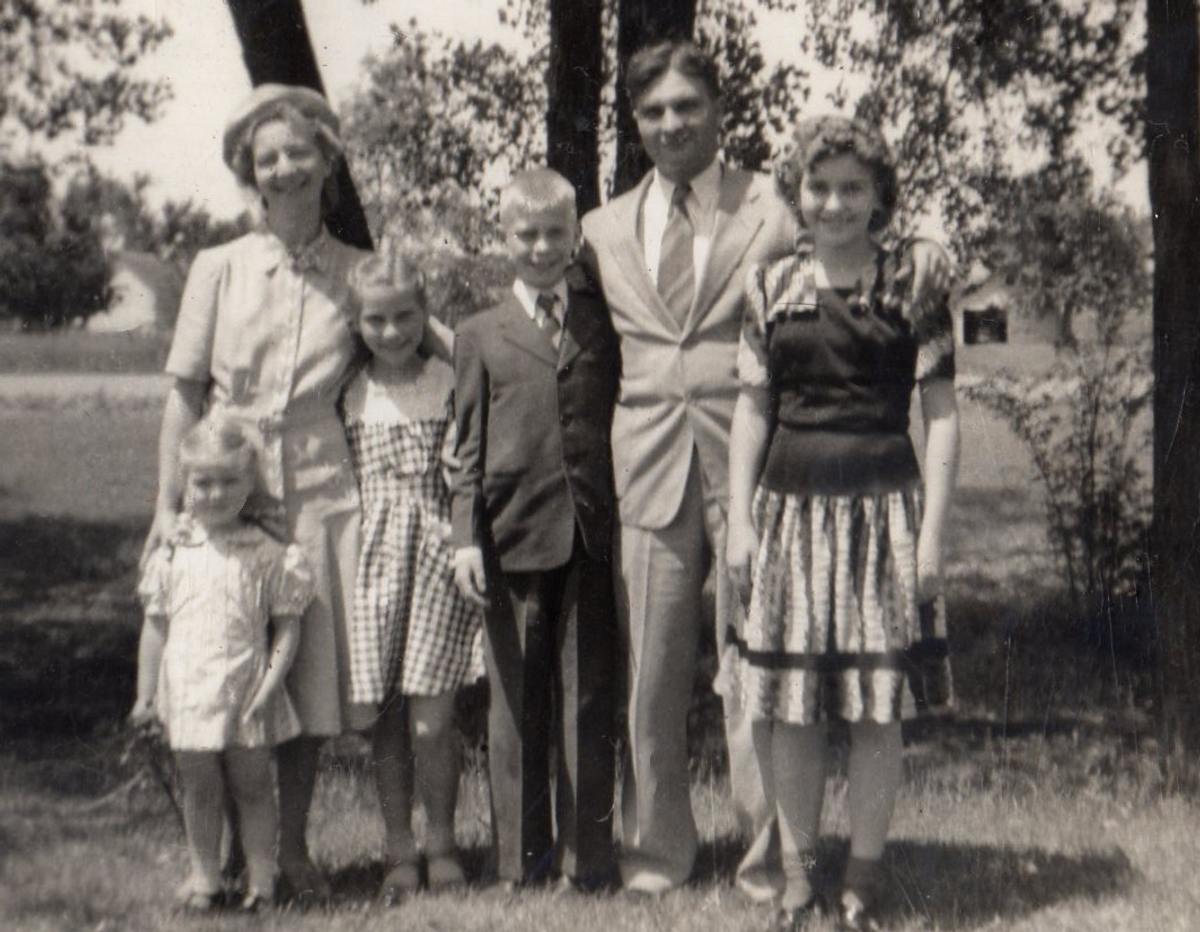 Mary Lou's family in Kansas in 1944. Mary Lou is on the far right (Courtesy of Mary Lou Goertzen)
--

This is the first article a new series called Heirlooms, which looks at the recipes families pass down from one generation to the next and why they matter.

The blue schoolhouse has begun to slouch with age, to settle into itself. Four tall windows clouded in white lace curtains shine with autumn light. The house has an old smell to it, like parchment, or quilts kept in a trunk, or books, and today the air is tinged with wood smoke and butter, sizzling in a cast-iron frying pan.

Mary Lou Goertzen is making thin pancakes, a tradition in her family that dates back at least to the era of Catherine the Great, when her great-great-grandparents fled Germany.

“Catherine the Great offered my family freedom from religious persecution if they’d settle and farm in the Ukraine,” Mary Lou says, setting the heavy cast-iron pan on the round wooden table. “The Mennonites lived in Russia for over 100 years. This is a recipe from my great-great-grandparents, German Mennonites who settled in the Ukraine.”

One hundred and fifty years later, American descendants of Ukrainian farmers were still using the same crepe recipe. Mary Lou, who was born in Kansas in 1929, remembers crepes as a Sunday tradition. “We called them flinsen. When I grew up, we had these for Sunday supper. You went to church in the morning. When you got home from church you had Sunday roast. That was enough cooking for the day. So Sunday evening we’d have a simple light dinner of flinsen with rhubarb or sour cherry preserves.”

For Mary Lou, flinsen were the saving grace of Sunday. “I always had trouble with Sundays. I’m a busybody and I don’t just ‘hang out’ very well. You’re not supposed to work or do much on Sunday. I’m not much of a reader, and I certainly didn’t take naps back then! I always liked the weekdays and Saturdays better — when things were happening.”

Mary Lou’s current neighbors would not be surprised by Mary Lou’s admission. Even at 82, she is extremely active in her rural community — quilting, baking bread for neighbors, making cards and signage for local events, lunching with newcomers, attending to the sick and the lonely. Mary Lou sees the world in terms of community and connectivity. The image of a spider in a web is generally used for unfavorable comparisons, but it suits Mary Lou in an altogether more positive light — she has devoted a long lifetime to weaving connections between people, to strengthening the ties that bind us.

Although Mary Lou and her husband, Ernie, were well known artists and pacifists in the '60s and '70s, Mary Lou’s variety of rebellion doesn’t mesh with the typical hippie origin story. She did not, for example, have an epiphany while reading “Be Hear Now” by candlelight while smoking a joint. Her idealism was homegrown in Kansas in the '30s and '40s. When Mary Lou was a child, her Mennonite community convinced President Franklin Roosevelt to allow conscientious objectors to set up civilian public service camps. And Mary Lou remembers her mother threatening to resign when she realized the PTA was not inviting black parents to a potluck. That said, Mary Lou’s home life was sheltered by today’s standards. “I’d never even heard of homosexuality until I went to college,” she says. In 1940 North Newton, Kan., risqué was a Sunday game of solitaire, a well-kept family secret.

She met Ernie at a Mennonite school, Bethel College. Ernie, a farm boy from a strict religious family, had just returned from a work camp for conscientious objectors to World War II. Mary Lou remembers Bethel when she and Ernie were dating: “There was no lipstick allowed, no fingernail polish, no dancing, no drinking.” Mary Lou and Ernie married in 1951, got jobs as teachers in a small town, and started a family. After a few years, Ernie realized teaching involved too much talking for his taste, so he studied to be a librarian. Then, in 1965, Ernie and Mary Lou decided to move to Berkeley and be artists.

I give Mary Lou a long look when she tells me this. I’m imagining this abstemious rural Kansas couple, steeped in religion, moving to Berkeley in 1965. But when I ask Mary Lou if she was shocked by Berkeley in 1965, she breezes right over the question. “Reagan was the governor of California. He sent troops into Berkeley because there was so much turmoil over the Vietnam War. We became very involved.” That’s when I realize that Mary Lou is not kidding around when she says she always felt outside of the mainstream. She confirms this when she suddenly launches into a description of an event from almost 70 years ago: At age 14, she woke up in the middle of the night.

“I had an experience of total nothingness,” she says, in much the same matter-of-fact tone she used when talking about pancake recipes. “Complete void. And afterward I realized: We have these bodies, and they’re strange — they’re really kind of strange if you think about it — and we have this stuff that we’ve created. But nobody that’s ever been born really knows what life is. I realized at that moment that I didn’t have the brains to worry about it anymore. Some people spend their lives trying to figure out the meaning of it all. And I decided — I don’t think I’m going to do that with my life. Instead, three things. Number one: I’m going to have fun. Number two: I’m going to try to create as little mischief as possible. I’m going to try not to mess things up. Number three: I’m going to be an artist. I’m going to work on one artistic project after the other.”

Sitting in the sunlight in Mary Lou’s house, I am surrounded by the results of that fanciful adolescent decision. The walls of the old schoolhouse are hung with Ernie’s stark and arresting landscapes; Mary Lou’s avant-garde pen-and-ink drawings, quilts, signage and embroidery create an artistic and eminently interesting clutter. On a side table, stacks of plates and teacups decorated in her unmistakable pen-and-ink designs tell the story of Mary Lou’s years as a successful designer for Block china.

We eat our crepes from plates Mary Lou designed -- fine porcelain encircled in pale green morning glories -- and the food seems another extension of Mary Lou’s talent. Silk thin, savory and perfectly stretchy, the crepes are a vehicle for the savory portion of the meal: cottage cheese with tart, fresh slices of tomato and bell pepper, rolled and topped with a slaw of carrots, apples and cranberries. For dessert we roll our crepes with home-canned blackberries. As we sop the last blackberry syrup from our plates, Mary Lou remembers making flinsen with her family in Berkeley. On Sundays, she’d spoon the batter into a jar and she, Ernie, David, Anya and Jonavan would ride their bikes to the park to make crepes on the picnic grills. “If you go to Tilden Park at 8 o’clock on a Sunday morning, there’s nobody there,” she recalls. “It was like we were these rich people who had this huge beautiful estate to ourselves.”

She and Ernie and the kids lived in Berkeley for 10 years. During that time, she marched in Memphis in solidarity with Coretta King, and she baked cookies for the national guardsmen who occupied their street during periods of civil unrest. In 1975, the family departed for rural Oregon, where she and Ernie bought the old schoolhouse where we sit today. From the table, I can see the gas range where Mary Lou has cooked family meals for 36 years.

When I ask for the flinsen recipe, Mary Lou rattles it off from memory, but like many people who have been cooking for a lifetime, she assumes that she needn’t get into the specifics — doesn’t everyone know the basics of temperature and ratio? When pressed she gives the following tips: “You want a hot skillet. A really hot iron skillet. I don’t think you can make good crepes on Teflon. The batter should be like thick cream.”

These days, Mary Lou makes flinsen only for company. Her voice takes on a timbre of untamed sadness when she talks about her “sweetheart” dying in 2004. “He was 78 — which was pretty good, because he had heart problems. His heart just got tired.” And suddenly, Mary Lou looks tired, too. We sit in silence and remember Ernie, a gentle, slow-moving man of uncommon grace.

But Mary Lou is an optimist, and a storyteller, and it is not in her nature to end our interview on a down note. She peps up to tell me a final story about the year 1970, when her family lived on a Franciscan mission in the heart of a military reservation. Her voice regains her usual enthusiasm when she talks about the priest there, Father Allen McCoy, a compatriot of Cesar Chavez. “The word got out that Father Allen had invited ‘communists’ to move into the mission. And not only were we communists, but we were also, apparently, nudists. The bishop called Father Allen, and he was very upset that we were there. Father Allen asked us to go down to see the bishop in Carmel, so that the bishop could see what we were all about. The bishop was so nervous that he couldn’t even let us come into his office. Ernie and I had brought some books of our artwork along to show him, so he could see what we were about. The bishop flipped through the books until he came to this portrait of Ernie’s grandmother and he stopped suddenly. He asked: ‘You painted this?’ Ernie told him it was a portrait of his grandmother, in Kansas. And the bishop said, ‘Well I grew up in Kansas, and it looks like my grandmother, too.” After that he relaxed and said, ‘Oh I know who you are: You’re holy hermits!’ That’s what he decided we were: harmless, holy hermits!” Mary Lou seems amused by this idea. She sits blinking in the November afternoon light that now shines on the remnants of our meal: “That’s it for me. That sums it up. Everybody’s fragile, and everyone has some goofiness. And we’re all one family. There’s no doubt about it.”