In prime-time, Big Brother watches everything 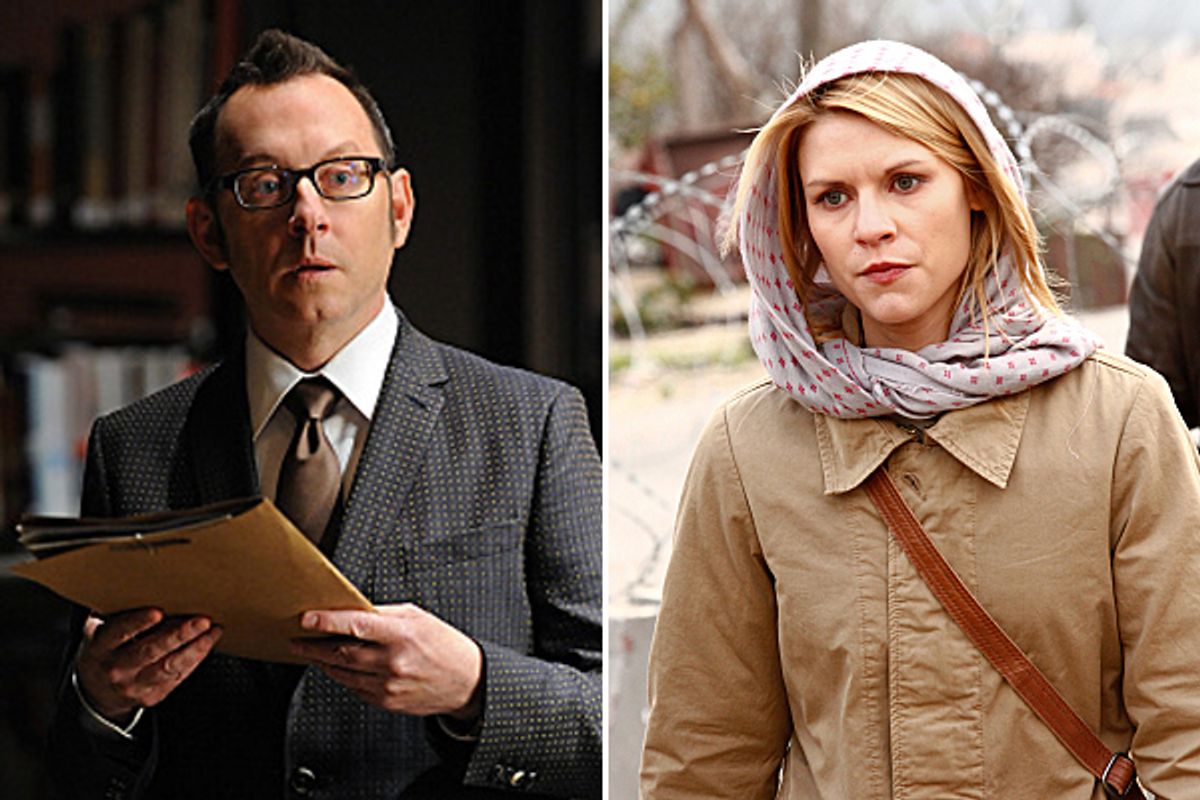 Michael Emerson in "Person of Interest" and Claire Danes in "Homeland"
--

Showtime's great thriller "Homeland" is a pretty gloomy show, but it gave me a laugh-out-loud moment a couple of weeks back without meaning to. Onscreen, the show's heroine, CIA analyst Carrie Mathison (Claire Danes) was sitting on a couch in her living room, watching a live surveillance feed piped in from the home of Nick Brody (Damian Lewis), a Marine whom Carrie suspects of being a terrorist sleeper agent. She watched a bit of the feed, wrote something down, had a little snack, wrote some more, and meanwhile, in Brooklyn, a television critic sitting on his couch watching "Homeland" did the exact same thing.

This is probably not what people mean when they use the phrase "art imitates life," but there you go. We're a society -- hell, a race -- of voyeurs ... of watchers. Our hunger for fresh images, fresh drama, is enabled not just by TV and Internet news but by the various sources of audio and video that feed TV and the Internet. We constantly consume video, audio and still photos released by the local police, the FBI, the CIA, the networks and private security firms, by the network and cable news divisions, and by the millions of upon millions of surveillance cameras and cellphone cameras and digital still cameras that generate media, then get uploaded onto YouTube or Vimeo or DailyMotion and linked on Facebook and Twitter.

Modern TV series reflect this, especially the shows that revolve around military action, national security, domestic crime and politics. These shows rely very heavily on surveillance and voyeurism. Their fixation is perfectly understandable; life itself is dependent upon surveillance, upon voyeurism, upon watching people you've never met live their lives on camera, unknowingly or knowingly. If TV series were deprived of these elements, they would probably become dramatically paralyzed -- or else laughably contrived, like all those "Law and Order" spinoffs and CBS crime shows that try to make their stories more "interesting" by having a convenience store owner or hotel manager or school principal explain that the surveillance cameras in the building are out of order, or haven't been hooked up yet, or yadda yadda yadda, which means that the detectives or CSI agents or NCIS officers or whomever have to go knock on doors and interview actual witnesses rather than just getting a warrant and pulling video footage. The non-surveillance-driven plots on such programs are not any more or less boring than the surveillance-driven ones, but they're more ridiculous, and thus less persuasive.

Starz's new political series "Boss," starring Kelsey Grammer as a ferocious Chicago mayor with a neurological disorder, is also very surveillance-heavy, with the mayor and his chief advisor (Martin Donovan) digging up dirt on political adversaries via the Internet and asking a news station to send the mayor unedited footage of a campaign speech so that he can determine if his hands are trembling badly enough for others to notice.  The mayor also has personal access to all of the surveillance cameras in city hall, and can punch into individual feeds from a computer on his desk. The last two seasons of "Breaking Bad" were hugely driven by surveillance, with meth magnate Gus Fring (Giancarlo Eposito) keeping tabs on his employees -- and in some cases seeming to anticipate acts of violence against him -- by studying countless surveillance feeds from cameras placed throughout his far-flung criminal empire. How many times did the show's protagonist, Walter White (Bryan Cranston), glare up at that surveillance camera bolted high on the wall of Gus' meth lab? Dozens, probably. The eye in the sky is the eye of a cold and controlling God. It sees all.

The plot of "Homeland" -- much like the plot of 21st century national security -- is driven by surveillance, by watching. Carrie put the video feed in Brody's house before she'd gotten official approval to do it, then got approval retroactively, then lost it when a few weeks of watching failed to produce any tangible proof that Brody was a security risk. Carrie's mentor and supervisor Saul (Mandy Patinkin) explained that he had no choice but to pull the plug on the operation. The scene in which the technicians removed all the hidden cameras and microphones from the Brody house was crosscut with shots of the Brodys attending a church service. The sound of the hymns served as ironic counterpoint to the shots of the technicians at work.

The juxtaposition was funny and chilling. Post 9/11, surveillance became American government and law enforcement's national religion, and the appeal of voyeurism -- which has been a favorite human pursuit forever -- fed into it. The lure of movies and scripted television has since become almost indistinguishable from the lure of documentaries, reality TV and YouTube videos of police brutality at Occupy Wall Street, people brawling on subways and buses, cats and dogs sounding almost as if they're speaking English, and little children caught unawares whilst cutely discussing the plots of movies or TV shows. (Part of what makes the pet and child videos so irresistible is that you know you're seeing the behavior of creatures who aren't always camera-conscious.) It's all one big voyeuristic blur. We watch other people, we let people watch us -- sometimes we invite other people to watch us. "Privacy rights?" When's the last time you or somebody you knew had a serious discussion about those? Privacy is so 20th century.

CBS is by far the most politically reactionary network when it comes to the depiction of crime and terrorism. Half of its prime time dramas, maybe more, revolves around cops or FBI agents or CIA agents or some other kind of agents secretly videotaping or wiretapping people, sometimes legally and sometimes illegally, in the name of fighting crime, or Evil.  In a lot of these shows the action centers on a fabulous control room in which technicians call up critically important information by tap-tap-tapping on keyboards. Meanwhile, their supervisors slide panels of information around on giant screens in much the same way that we move things around on laptop or iPhone screens. The 2002 Steven Spielberg movie "Minority Report" predicted this visual cliche, and cleverly linked it to filmmaking and storytelling. Tom Cruise's character, a cop who solves crimes before they can happen with help from clairvoyant "pre-cogs", manipulated electronic information by shifting it about in midair. He was a like a combination film editor and sorcerer. CBS crime shows -- and a lot of other network shows, too -- present this watching, listening, recording and downloading of information on private citizens as either value neutral or unambiguously good -- as technology and information that is just "out there" and that can be accessed by the good guys to catch the bad guys. (CBS' corporate logo is an unblinking eye.)

It was probably only a matter of time before CBS aired a crime show that made the society of total surveillance seem exciting and cool. That show is "Person of Interest." Michael Emerson of "Lost" stars as Mr. Finch, a billionaire hired by the Department of Homeland Security to create pattern recognition software, the better to enable law enforcement to sift through the blizzard of raw data coming their way 24/7 and anticipate terrorist attacks before they happen. The program also generated indicators of other potential crimes, though; since it would be a pity to let this good information go to waste -- even though it's pretty vague, just Social Security numbers of people who might be perpetrators or victims -- Finch hires a burned out, presumed-dead super-soldier named Reese (Jim Caviezel) to be his man on the ground and stop these crimes from happening. Remember those worried discussions a decade ago about whether law enforcement should be allowed to use non-terrorism-related info that got swept up in the new electronic dragnet? That's what "Person of Interest" is about. It takes for granted the notion that it would be a shame not to use all the information that the national security state has been accumulating since September 2001. The show's mythology is fascinating and troubling -- it essentially puts a benevolent face on Big Brother. He watches because he cares.

"Homeland" has a far more complex attitude toward surveillance. Carrie, too, watches because she cares, and because she feels guilty over past failures. (She believes that she could have prevented the 9/11 attacks but didn't.) But she also watches because she likes to watch. The shots of Carrie glued to the surveillance monitor have an auto-critical quality: she looks excited and content, like somebody who has just settled in to watch her favorite R-rated cable series. The Brodys are her favorite characters, and this is her show. She's trying to anticipate what will happen next, like a "Breaking Bad" or "Boardwalk Empire" junkie, but with real, potentially bloody stakes. And she's empathizing with the characters as if they're extensions of herself.

"I can't help but feel I'm missing something," Carrie tells Saul, angling to get the surveillance re-approved. "You're missing him," he replies. A shot on "Homeland" showing Carrie returning home to a living room without a surveillance monitor was one of the most unexpectedly piercing moments on the series to date. She had become completely engrossed in the Brodys' lives, as if the feed from their house were a 24-hour-a-day reality show -- like the series "Big Brother" but with life-and-death stakes and unedited sex and nudity. And now the show had been taken away from her -- canceled by her boss. She was bereft, and within a few scenes we saw her lurking outside the Brody home, peering into their windows with night-vision goggles.