Welcome to the "augmented revolution" 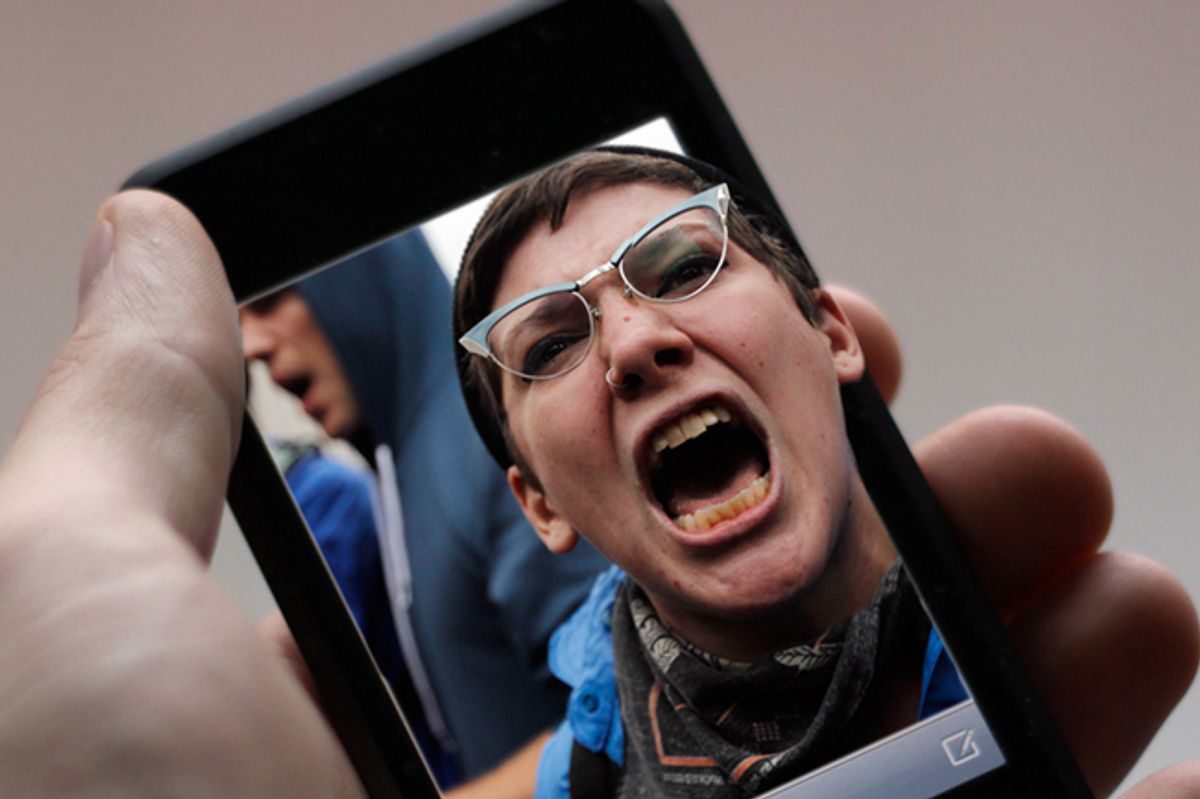 Earlier this year, there was a spat that was both silly and superficial over the terms “Twitter” and “Facebook Revolution” to capture protests in the Arab World. On the one hand, those terms offensively reduced a vast political movement to a social networking site. On the other, Malcolm Gladwell's response -- that there was protest before social media, therefore social media had no role -- was equally unfulfilling.

Neither view captured the way technology has been utilized in this global wave of dissent. We are witnessing political mobilizations across much of the globe, including the Middle East, North Africa, Asia and South America. Riots and "flash mobs" are increasingly making the news. In the United States the emergence of the Occupy movement shows that technology and our global atmosphere of dissent is the effective merging of the on- and offline worlds. We cannot only focus on one and ignore the other.

It is no historical coincidence that the rise of social media will be forever linked with the global spread of mass mobilizations of people in physical space that we are witnessing right now. Social media is not some space separate from the offline, physical world. Instead, social media should be understood as the effective merging of the digital and physical, the on- and offline, atoms and bits. And the consequences of this are erupting around us.

Occupy Wall Street and the subsequent occupation movements around the United States and increasingly the globe might best be called an augmented revolution. By “augmented,” I am referring to a larger conceptual perspective that views our reality as the byproduct of the enmeshing of the on- and offline. This is opposed to the view that the digital and physical are separate spheres, what I have called “digital dualism.” Research has demonstrated that sites like Facebook have everything to do with the offline. Our offline lives drive whom we are Facebook-friends with and what we post about. And what happens on Facebook influences how we experience life when we are not logged in and staring at some glowing screen (e.g., we are being trained to experience the world always as a potential photo, tweet, status update). Facebook augments our offline lives rather than replaces them. And this is why research shows that Facebook users have more offline contacts, are more civically engaged, and so on.

Simply put, the terms “real” and “virtual” to describe the physical and digital worlds are inadequate: Facebook is real as the rest of the world grows increasingly virtual. It is this massive implosion of atoms and bits that has created an augmented reality where properties of digitality -- information spreads faster, more voices become empowered, enhanced organization and consensus capabilities -- intersect with the importance of occupying physical space with flesh-and-blood bodies.

As an augmented revolution, the occupation movement has from the very beginning utilized the Web while always focusing on the importance of (occupying) physical space.

Inspired by the Arab Spring, Adbusters initially established the Occupy Wall Street protests. Much of the early organization occurred online, especially as the Internet hacktivist group Anonymous joined in. Social media has been used to organize local occupations as well as spread news about the movement, sidestepping traditional media outlets that remained confused and largely ignored the movement. Once organized, occupy protesters are taking photos, tweeting and videoing police brutality (which, arguably, and perhaps ironically, has been a primary factor in getting the attention of traditional news media).

This is most certainly not an Internet Revolution.  Much more than a “digital” protest, the movement has been fundamentally concerned with taking over geographic space, mobilizing bodies in an area, yelling, walking, breathing, sleeping and doing what physical bodies do. There is clearly an embrace of low-tech at Occupy Wall Street, where retro and analogue technologies augment the high-tech at the park. And, of course, the Occupy movement is concerned with issues very real to our offline lives, such as economic inequalities, social injustices, global politics and so on.

The lesson that is playing out over and over is that utilizing both physicality and digitality and the important intersection of the two can effectively mobilize massive numbers of people. The tactic of  augmented revolution is becoming increasingly refined. Those organizing the Occupy protests learned from the Egyptian uprisings, which augmented utilizing both the physical and digital to more effectively create change. The U.K. riots and the subsequent cleanup effort did the same.

Why does the implosion of atoms and bits into an augmented reality help create the atmosphere of dissent we have today? Some of these reasons are well-known: People have access to more information; the Internet allows for ideas created by just about anyone to spread rapidly across the globe; people can more effectively network and organize; and so on.

Because of social media, protests today are far more participatory than ever before. In physical space, one’s potential audience is often small. The underlying threat for any protest movement is that ambition, motivation and a sense of hope that each individual is making a difference might fade. With social media, people can see the difference they are making. They are not just passively consuming dissent but are more actively involved with creating it.

So the Occupy movement was able to sidestep traditional media outlets to get attention and grow in numbers. The traditional news-gatekeepers were left scratching their heads. Today, the media produced from protests can be created by those protesting. Many of the well-connected protesters-turned-cyborgs can snap photos, shoot videos, organize on Facebook and tweet to the world. (Remember, smartphones have spread throughout income demographics in the United States as well as throughout the developing world.) This is participatory, prosumer dissent.

And what is often overlooked is how social media promises an audience for this content. This is an important change. No longer are protesters just shouting into the wind (made of atoms), one is also shouting into a network (made of bits) where there is an audience that may be receptive to your message. To illustrate this point that providing an audience also imparts motive to behave: Would we feel the necessity to take a picture of the breakfast we just made if Facebook could not guarantee that others might “like” and comment on that photo? As a protester simultaneously marching in physical space and documenting what you do online, you can watch the stream of activity by following hashtags on Twitter and see your tweet retweeted by someone else on the other end of the globe. You can post your photos to Facebook and watch the comments come in. Augmented by the Internet, what you are doing seems to matter more. This is the not-so-secret weapon of augmented revolution.

I think this is part of the story for why we are currently living in this flammable atmosphere of mobilization that is growing around the globe (as well as the counter-movement of digital repression). Protest and rioting are all more possible, perhaps likely, because social media has united the power of both physical space and networked digitality. Some have even argued that the organizational structures of the Occupy movement mimic the network logic of the Internet. Thanks to the effective merging of the on- and offline, massive gatherings of people attempting to change the order of the world around them is now the new normal.

Nathan Jurgenson is a PhD student in Sociology at the University of Maryland who blogs at Cyborgology. Follow him on Twitter @nathanjurgenson