Michelle Williams says only gay men and her girlfriends like her pixie cut. Why is long hair still sexy's standard? 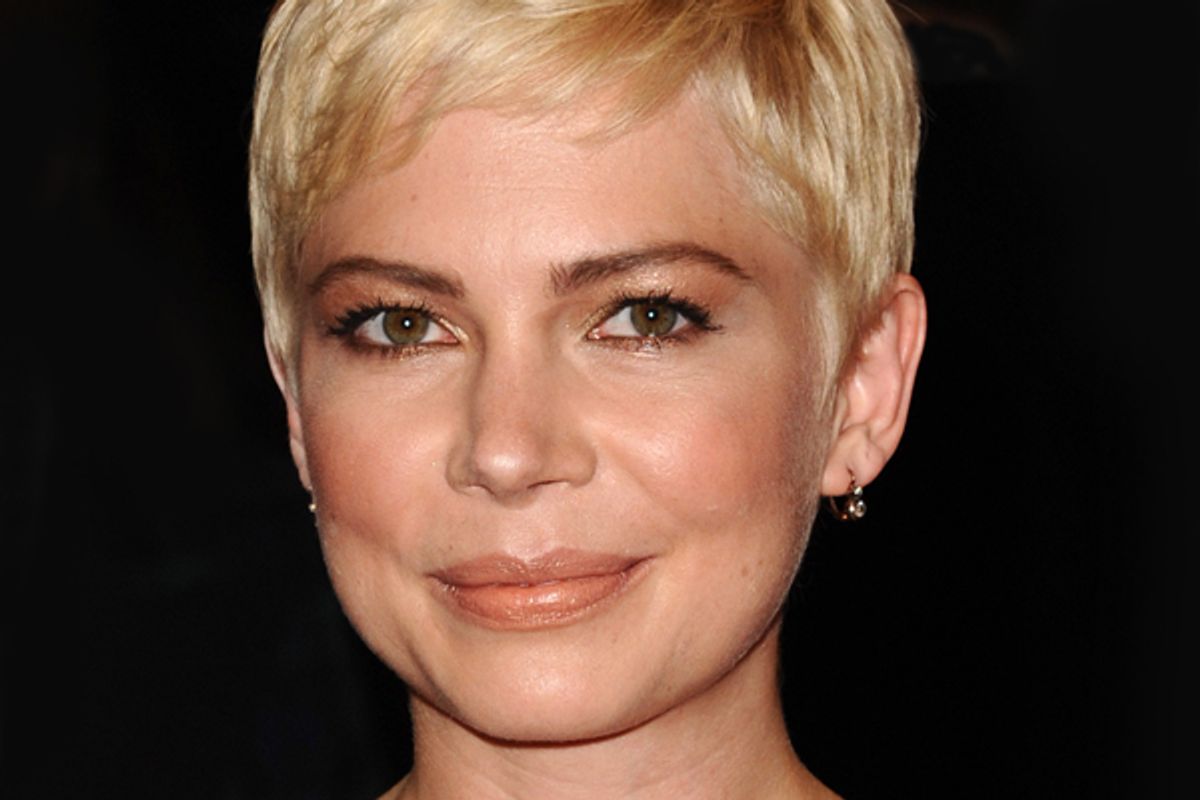 It seems impossible -- how could Marilyn Monroe be undesirable? Yet in a new interview with Elle, Michelle Williams, who plays the doomed blond bombshell in "My Week With Marilyn," admits that her real-life look has never won her too many fans. Speaking about her trademark short-cropped hair, Williams says that "I've really grown into it -- I feel like myself with short hair. And it's been a really long time since I had long hair, five years." But Williams admits that her daughter, Matilda, "would love ... her mum to grow out the cropped hair, though that's unlikely to happen any time soon." The only people who like it, she says, are gay men and my girlfriends. "Straight men across the board are not into this hair!" Well, one man was -- in a reference to her ex-fiance, Heath Ledger, who died in 2008, she says, "I cut it for the one straight man who has ever liked short hair and I wear it in memorial of somebody who really loved it."

Why do so many people – from 6-year-old girls to nearly every straight man on the planet – have a thing for long hair? True, the flowing mane has always had a powerful allure – Shakespeare wrote of his lady's hair as "threads of beaten gold" and wavy-haired ladies milk that pre-Raphaelite thing to this day. But the iconic, much-imitated Dorothy Hamill and Princess Diana cuts trend only briefly, before giving way again to Paris Hilton and Tyra Banks-level super weaves.  Gone are the days when you could even have a token Cynthia Nixon short-haired chick on your television ensemble -- now it's all Sofia Vergara and Whitney Cummings. The closest thing to a short-haired TV star is Judge Judy.

And just as surely as contemporary females are expected to have zero hair anywhere on their bodies, they're considered unusual if they aren't rocking a Taylor Swift-like follicular cascade. Behold the current Maxim 100 -- not a short-haired image in the bunch, even of Maxim-designated hotties and sometime-pixies Rihanna, Emma Watson and Natalie Portman. Clearly, flowing locks are a source of power. That's why it's such a shock when actresses like Williams lop off their hair – and why they're often in a hurry to get it back. Julia Roberts shaved for "Hook" 20 years ago, and has been all trademark waves ever since. Demi Moore famously went shorn for "Ghost" and "G.I. Jane," then quickly returned to waist-length tresses. Perhaps most notably, Gwyneth Paltrow's moment of shortness in "Sliding Doors" was a blip in a career spent behind a princess blond mane.

In many quarters, a woman cutting her hair is still seen as a woman committing an act of rebellion. She's a troublemaking Sinead O'Connor ripping up the pope's picture, a defiantly post-"Harry Potter" Emma Watson, a brazenly weird Amber Rose. She can be as traffic-stopping stunning as Winona Ryder in her Gen-X heyday, as hot as Halle Berry emerging from the surf in a James Bond movie, or as fierce as Keira Knightley kicking ass in "Domino" -- and there's still an implied "I'm just sticking it to the man" subtext to her do.

Sometimes, short hair is the beer gut for ladies. Among a certain segment of my mother's and grandmother's generations, a short cut was an admission that you were middle-aged and no longer interested in making the effort. But for plenty of women, hair is just a canvas upon which to creatively express themselves. For them, short hair isn't an admission of defeat – it's an expression of a style that doesn't have to fit into the Anne Hathaway mold. The notion that our hair has to conform to rigid parameters is as ludicrous as the idea that our bodies do. Because, really, what's sexier than a woman who, like Williams, says she feels comfortable with herself? And if the little girls and straight men don't quite get it, it's a good thing that the woman gorgeous enough to embody Marilyn Monroe, the goddess whose own platinum tresses frequently never grazed her shoulders, does.