In a press conference with Gloria Allred, a former NRA employee describes an encounter with the GOP candidate 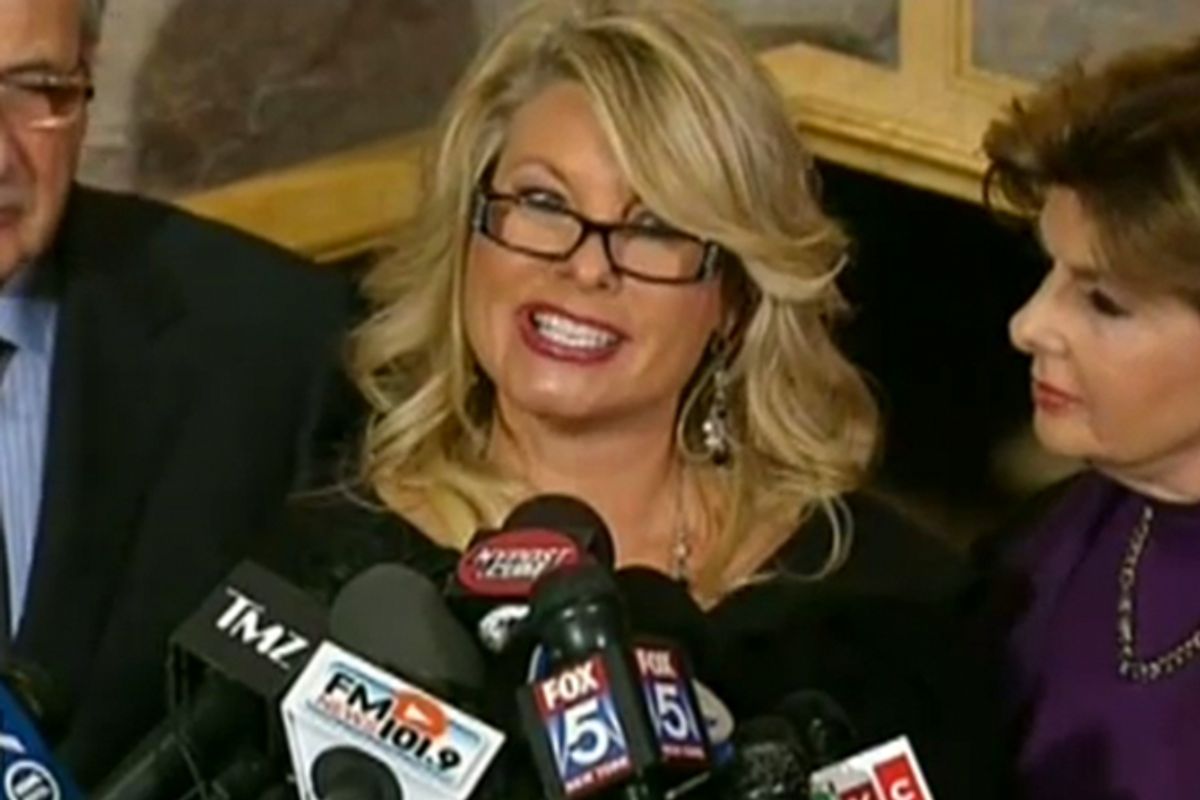 Finally, six days after a somewhat nebulous sexual harassment story broke, a person has actually come forward, identified herself, and lodged a specific accusation of inappropriate behavior against Herman Cain. Actually, what Sharon Bialek accused him of might actually be defined as sexual assault.

In a statement she read herself at a New York press conference, Bialek recalled meeting Cain at a convention back in the summer of 1997, when he was running the National Restaurant Association and she was working as a fundraiser for the organization's educational foundation. A month later,when she was laid off from her job, she said she reached out to Cain, hoping he might help in her employment search. She traveled to Washington to meet him and booked her own hotel room for the trip, discovering when she arrived at the Capital Hilton that she'd been moved to a lavish suite. When she met Cain for dinner, he explained why: "I upgraded you." Later that night, she claimed, he offered to show her the NRA's headquarters, at which point he "suddenly reached over and put his hand on my leg, under my skirt and reached for my genitals" and then tried to pull her head toward his crotch. When she objected, he replied: "You want the job, right?"

If her story is true, this would seem to implicate Cain in an act of sexual assault. But it may be too late to prosecute. Apparently, the statute of limitations for first- and second-degree sexual assault in the District of Columbia is 15 years, but for third- and fourth-degree cases (which this likely would be) it's only 10 years. The alleged incident occurred more than 14 years ago, in 1997. Bialek did not report the incident to authorities at the time and gave no indication that she's interested in pressing charges now.

The million-dollar question is whether this will finally prompt Republicans to turn on Cain. He demonstrated remarkable staying power last week, with influential Republican voices framing the entire scandal as a creation of liberals and their media allies. At the end of the week, Cain was still at the top of GOP national polls, and new numbers released today suggested Republicans still weren't bothered by the saga. But now we have a specific, graphic accusation -- one that can't be dismissed as a case of misconstrued words. And Bialek went out of her way to stress her own conservative credentials, noting that she'd been a guest at a Tea Party event in Chicago last month and praising Cain's "inspirational" speaking style.

On the other hand, her lawyer is Gloria Allred -- or, as the Cain campaign identified her in a statement released during the press conference, "activist celebrity lawyer Gloria Allred." Simply put, Allred is exactly the sort of character that the Republican base loves to hate. So if Republican voters -- and, more specifically, Republican opinion-shapers like Rush Limbaugh and Sean Hannity -- decide to focus on Allred's role instead of Bialek's, Cain just might continue defying gravity.

Update: And already Limbaugh is taking the Allred bait, telling listeners that Bialek's name is pronounced "Buy-A-Lick," emphasizing the point by making a slurping sound. Here's video, courtesy of TPM: