After a young man sets himself on fire to protest living conditions, the nation\'s response is muted 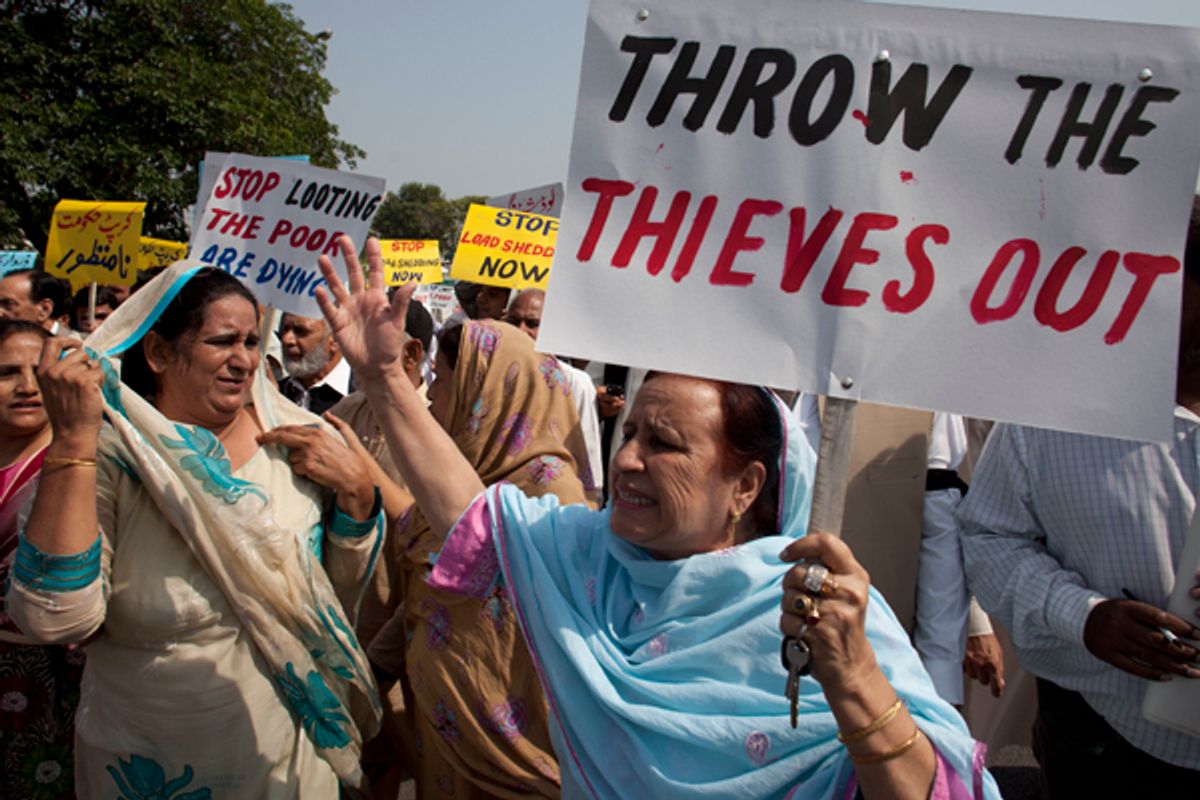 HAJI SAINDAD RIND, Pakistan — It could have been an Arab Spring moment. Taking an apparent cue from the young Tunisian who, tired of the poverty in which he lived, set himself on fire and launched a protest movement around the world, Raja Khan, 23, went to Pakistan’s parliament late last month and did the same.

But in a country where poverty and unemployment is more a norm than an exception, the reaction has been muted.

Police in Islamabad said Khan left a note to say he couldn’t bear to live in such condition anymore. On the day of his burial, his 20-year-old wife, Najma, gave birth to their third son.

“He said, ‘I am taking fuel with me and I’m going to set myself on fire.’ I said, ‘please, don’t do this, for the sake of your children.’ I begged him, ‘don’t do this for the sake of God. Think of me. Who will take care of me if you are gone?’ But he didn’t listen,” Najma said, sitting outside her simple brick house, while her brothers wiped away her tears.

The number of Pakistanis that commit suicide because of poverty is on the rise, said I.A. Rehman, director of the Human Rights Commission of Pakistan, though exact figures are not available.

Rehman received 1,580 reports of suicides in the first nine months of this year, compared to 1,668 cases in all of 2009. Human rights activists said that Pakistanis often avoid reporting suicide because under Pakistani law, survivors can face a jail sentence and fine. It is also considered a sin in Islam.

“There is an increase because more and more people are falling below the poverty line. Secondly, we also know that the unemployment rate is increasing,” he said.

Poverty can also fuel militancy, according to Feriha Peracha, the director of Sabaoon, a boarding school that aims to de-radicalize former Taliban members.

“Your needs are not met. You don’t want to go to school because you have to earn a living. Otherwise, how do you feed yourself that day? So they drop out and they’re picked up [by the Taliban],” she said.

But Rehman warns that the link between poverty and militancy is often exaggerated.

“It’s not poverty only. Not all militants are very poor. This view is supported by a survey conducted in 2009 among 6,000 Pakistanis. They found that poor Pakistanis disliked militants about two times more than middle class Pakistanis.

According to government figures, unemployment in July this year was 6 percent, compared to 5.6 percent last year. But the study counts anyone who worked at least one hour in the week before the survey was taken as employed; so many think the number could actually be much higher.

Same goes for the number of Pakistanis that live below the poverty line. Officially it is one third of the population, but in reality it is much higher, said Zaffar Moeen Nasir, chief of research at the Pakistan Institute of Development Economics.

Pakistan suffers from inflation and foreign investors stay away because of an unstable political, security and infrastructural environment. The energy crisis is the most striking example. At least three days a week Pakistan’s main industry, the textile sector, comes to a standstill, because gas cannot be supplied, according to industry officials.

“People cannot work in the factories full time anymore or are laid off. So there is a decline in production, which means a decline in the earnings of workers,” Rehman said.

Even with normal working hours, however, many Pakistanis are unable to earn enough to support their families, and are driven to suicide as a result, said Khalid Mehmood, director of the Labor Education Foundation.

Khan desperately hunted for jobs for years, his relatives said. He left school when he was 15-years old. As the eldest son he became responsible for the income of his family. His father no longer works, one brother is sick and the other is unemployed. When he married Najma and had two sons, now 5- and 3-years old, the pressure to provide a proper income increased. The only work he found was as a day laborer on the agricultural fields for about 20 cents a day, when there was work to be had.

When in 2008 national elections brought the Pakistan People’s Party (PPP) to power, Khan, whose family is an avid supporter of the party, was convinced he would finally land a job. He asked provincial lawmakers and party officials in Islamabad for a job and even went on a hunger strike. Last February, a PPP-leader in the capital gave him a letter requesting a provincial minister to induct Khan’s wife into the police force. It all resulted in nothing.

And so, at the end of October, Khan went to Pakistan's national parliament, the only place where he knew people would be more influential than those he had already contacted. Before he left he asked Ali Jan, a 24-year-old cousin, for advice.

“I told him, ‘don’t go to Islamabad because your efforts will be in vain.’ But Khan said, ‘no, I’m poor, I’m worried and I have to go.’” Khan didn’t meet any lawmakers, Jan said. “He only met with security officials at the gate of the parliament.”

Khan is from a dusty village, a 7-hour drive from Pakistan’s financial capital, Karachi. Villagers here say most people can read and write, but they work in the fields on the land of a feudal landlord. Many of Khan’s cousins have finished at least part of their high school education.

Khan’s mother, father, brothers, wife and children stay in a room in a compound shared by other relatives. In the courtyard are goats and buffalo the family says are rented against half the milk they produce. Water pumps in the houses provide for clean drinking water, which Khan’s family calls “the only gift from God.” There is a television, washing machine and fans on the ceiling. Some of the residents carry mobile phones. Electricity runs for about 12 hours a day.

In Pakistan, Khan’s family is considered lower middle class. And it is among this group of people where the most suicides occur, Rehman said.

“Poverty is a matter of feeling also. One may be poor and conscious of it. This consciousness comes from a certain level of education and exposure to urban life. Raja Khan knew of the parliament. An ordinary villager would not even know of Islamabad nor have the means to travel there. For him, the state is the local police and the economic benefactor is the landlord.”

Najma finds it hard to reconcile the idea that just one job could have saved her husband.

“If the government had given him a job, even in the lowest grade possible, I would not have become a widow,” she said.