Personhood is heading for a tight vote today. Either way, the result will reshape the abortion debate for years 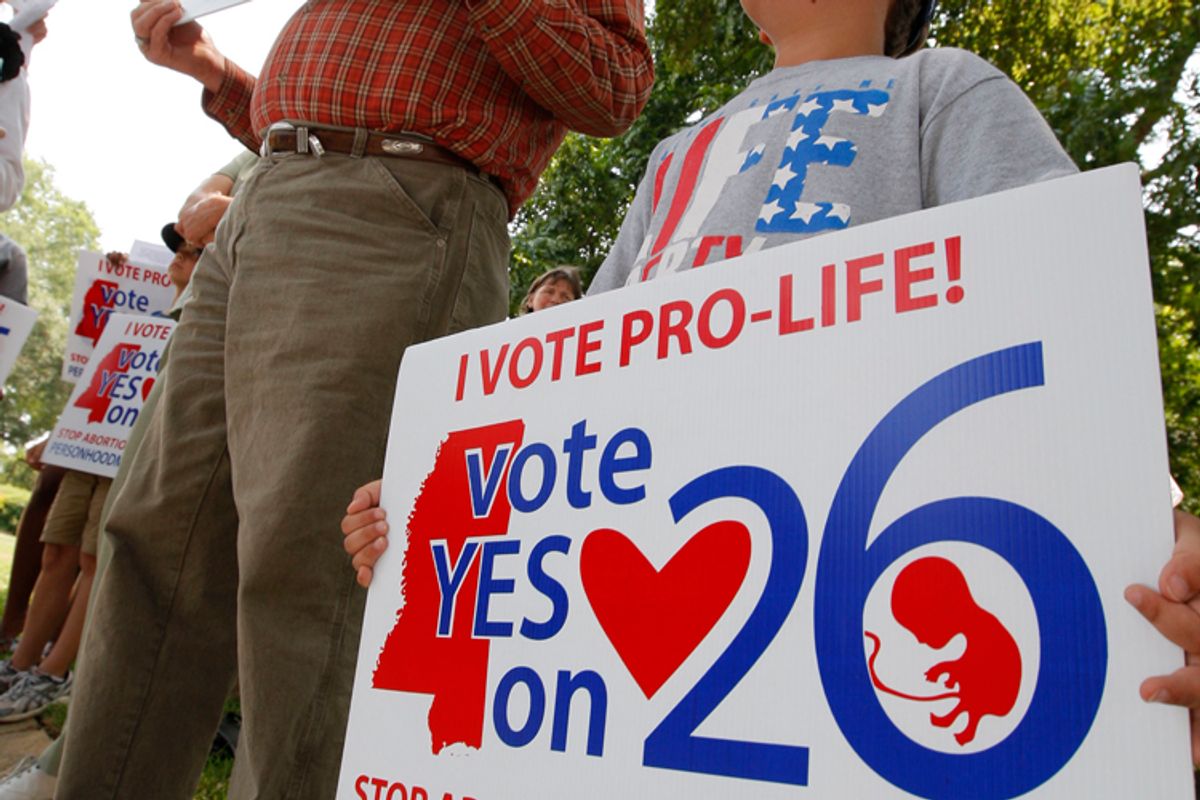 Protestors during a prayer rally for the Personhood Amendment at the Capitol in Jackson, Mississippi (Rogelio V. Solis/AP)
--

"It just seems so unfair that you got your two children and now you’re taking the rights (away) for others," said Cristen Hemmins yesterday.

Hemmins, the most visible face of the movement to defeat Mississippi's now-notorious Personhood Amendment, heading for a close vote today, was talking to Brad Prewitt. He's the campaign director charged with passing the initiative, which defines life as beginning at fertilization. He's also a father through in-vitro fertilization, which fertility specialists say Initiative 26 would make practically impossible.

“Nothing’s fair,” Prewitt replied, according to a recording, and walked away.

Prewitt (who didn't respond to my request for an interview yesterday) had reason to be testy. Initiative 26, until recently considered an easy sell in a fiercely antiabortion state, had just been declared a tossup in a reliable poll. Support for the amendment has dropped 17 points in just two weeks, his anti-26 counterpart, Stan Flint, told me, as the public debate shifted to what it would actually mean to declare fertilized eggs people. It would affect not only IVF, but also ban abortion and many common forms of birth control, open the door to prosecuting women who suffer suspicious miscarriages, and tie the hands of doctors trying to save women's lives.

Prewitt's compatriots sounded worried from the stage of the Tupelo, Miss., press conference. "I thought we would have won easily two months ago, but there’s been so much distortion, lies told, and some people believe them," said Donald Wildmon, whose American Family Association helped take Initiative 26 (relatively) mainstream. "We’ll wait and see and we’ll pray that tomorrow will be a good day."

No one was as upset as Lt. Gov. Phil Bryant, despite the fact that the same polling that found Personhood too close to call also predicted he would be elected governor of Mississippi today. "You’ve heard some very complex television and radio ads lately that say that these men here and many of the women that join us ... somehow want to do harm to women," he fumed. "Let’s just call it what it is, it’s wild and crazy. But that’s what the other side must do whenever we stand up for life and say, it’s simple, that child in the womb after conception has the same basic human rights as you and I."

Bryant went so far as to compare the issue to the Holocaust and the Jews of Nazi Germany "being marched into the oven," because of "the people who were in charge of the government at that time." He described the ballot measure as "a battle of good or evil," and warned, "the evil dark side that exists in this world is taking hold. And they’re saying, what we want you to be able to do is continue to extinguish innocent life. You see, if we could do that, Satan wins."

Presumably referring to Christian leaders who have opposed or declined to support the measure, including the state's Catholic and Episcopal bishops and a Baptist pastor in Greenville, Miss., who wrote a letter saying, "I'm a Christian and I love Jesus ... I'm pro-life and against abortion ... and I love Mississippi ... but I'll be voting NO on Initiative 26," Bryant finished, "Those who are out there and say, 'I don’t know, it just seems too complex for me,' remember this: You’re on the side of the lie. You’re on the side of taking the lives of innocent children. It is no more complex than that."

Notably absent from the event was Haley Barbour, the current Mississippi governor, who last week inexplicably gambled some of his massive popularity in the state by first expressing doubts on Initiative 26, then saying he'd voted for it anyway by absentee ballot. In the interim, he was blasted by Personhood USA for being in the pocket of abortion-pill makers and turned into a robocall for the anti-26 side (which he later demanded, successfully, that they stop running).

Though a press release had been sent out for yesterday's event, and the lineup included U.S. Sen. Roger Wicker and Rep. Alan Nunnelee, there also seemed to be no reporters present. The only questions were asked by Alan-Michael White, a smart-ass student at the University of Mississippi who recorded the media availability, and Hemmins, who asked Bryant how he could deny her, a rape survivor, autonomy over her body. "What I could never understand, because this is so personal to me, is why can’t you men have any sympathy for me as a rape victim?" she said. "All your sympathy goes to a fertilized egg. You can’t even see it yet ... But we’re here and we’re real people and we deserve to make decisions with our own bodies."

Strangely, this is where Bryant eventually yielded some ground. “To believe that somehow a judge would say, 'I’m going to prosecute this rape victim,' I think is beyond anyone’s reasonable ability in a real world instance to say that that’s going to happen,” he said, declining to elaborate how judges might decide to give one-time passes to "murders."

The press conference came to a close with Hemmins' friend Elizabeth Feder Hosey objecting, emotionally, to being "likened to Satan," and how her "daughter is going to grow up in a state that doesn't value her." She shouted, "Mississippi mothers are not evil, we are not Hitler. You look me in the eye, Phil Bryant, you tell me I’m evil! You never carried a child.”

Meanwhile, Personhood USA, which made a significant investment in trying to get Mississippi to pass the first ever such amendment to try to flout Roe v. Wade, was trying to use similar rhetoric. "Increasingly, the American people are being treated paternalistically by a government, media and public sector elite that stands in direct opposition to our traditional American values," wrote Gualberto Garcia Jones in USA Today. He continued, "Using the courts as its instrument, this American elite has emasculated a once independent America."

With that recent polling showing a one-point spread between yes and no votes, with 11 percent undecided, each side will be mobilizing its ground game today. On pro-26 sites, which still boast a major organizational and political advantage, grass-roots activists talked about fasting today and exchanged Bible verses.

Hemmins told me last night, "All of the nation and people around the world are waiting to see how we vote ... and whether Mississippi is going to reinforce all the negative stereotypes that most people have of our state. Are we going to vote against our interests again? Are we going to be the backwards idiots they think we are? I really think we’re going to prove them wrong."