I used to schmooze clients and drive a fancy car. But when I lost my sales job -- I embraced my true calling 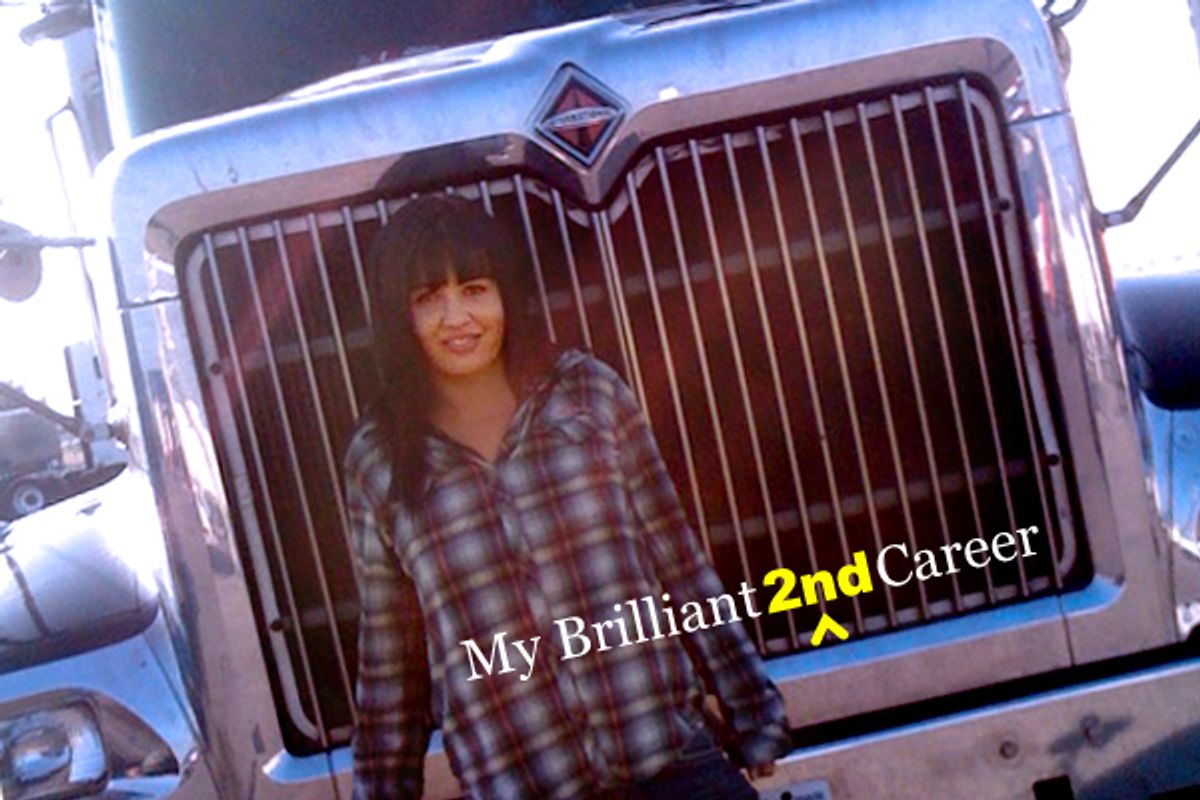 (Image courtesy of the author)
--

This is the second in a series about people who stared down the Great Recession -- and reinvented themselves along the way. Do you have a great Plan B success story? Post it on Open Salon, tag it "My Brilliant Second Career," and we might publish it on Salon -- and pay you for it. A version of this story first appeared on Tiffany Brubeck's Open Salon blog.

It’s four o’clock in the morning. I’m slumped in a corner booth at Klein's truck stop. It's been a heck of a night, but I have a wad of cash in my purse and the coffee’s hot. Joint’s empty, with the exception of a couple old-timers chatting up the counter waitress. All three sneak glances in my direction, uncertain what to make of me. “Too pretty for a lot lizard,” one says, shoveling spoonfuls of gravy into his leathered face. “Why in tarnation a young gal would be out here alone at this hour,” mumbles his buddy between bites of toast. Their gossip is muffled by a deep rumble that rattles the windows. In the darkness, illuminated by hundreds of tiny diesel lights strung along the side of cabs like it's Christmas -- another long, shadowy 18-wheeler slides out onto the interstate.

I’ve been coming to places like this for long as I can remember. When I was a six-year-old kid growing up in the Ozark mountains, only one thing was more wonderful than Grandpa, and her name was "Betsy,” his '79 Kenworth K100. Climbing up into Betsy’s cab the grownup world outside seemed to shrink. I became the Invincible Girl. I’d maneuver the wheel of the motionless truck, imagining the steel beast under my command. I wish I’d held tighter to that six year old -- cultivated her priceless imagination and guarded her innocence with ferocity. But something shifted. Maybe it was jerky school kids who snickered when I boasted Gramps was a trucker, or nasty ankle biters who argued I should be playing with Barbie, not Hot Wheels. Perhaps it was Cliff Huxtable and Jason Seaver, TV dads of the 80s, who arrived home every night before dinner in cable-knit sweaters and never made mommies cry. Whatever it was, by the time I turned eight, I'd determined life as a long-hauler wasn’t something to brag about.

After graduating, I moved out west to work in sales. I mingled on the scenes, networking, and schmoozing clients. I chowed down at swanky restaurants, charged designer clothes, and even leased a fancy convertible. I walked and talked with left-coast confidence, but inside I felt phony. This is California, I assured myself. Everybody assimilates. I soaked up la-la-land like a soppy biscuit. I had no idea what a bellyache it would give me.

One morning in November 2008, the fantasy stopped. I'd fallen behind on my quota for signing up customers to open lines of credit. And when the axe started swinging, I was the first to go. I went home and cried hysterically, partly because I was stuck in debt quicksand with no tree branch in sight, but also because in my gut, I’d known the danger all along. I'd seen the quicksand -- and told myself it was a hot tub. I certainly couldn’t ask my folks for help. My grandparents toiled for every dime they ever earned; they wanted a better life for me -- which did not include my sacrificing health insurance so I could afford bigger car payments. After years of dismissing their penny-pinching values as old-fashioned and hokey, I was too humiliated to confess that living high on the hog had eaten me alive.

For the next few months, I wore my pajamas all day long. The streets were tomb quiet while the rest of the world went to work. The mid-afternoon sunlight pouring through the windows was bright enough to cause headaches. And on TV, every commercial peddled the snake oil that will catapult you off your couch and back to success. During that slump of unemployment, I entertained the idea of becoming everything from a court reporter to pastry chef, all while devising a no-fail formula for winning both showcases on "The Price Is Right." But after I waded through all the “GET RICH! CHANGE YOUR LIFE! DIAL NOW!” boob-tube malarkey, I realized sometimes the right path out is to turn your heels and head back the way you came. So I sucked in a deep breath, picked up the phone  -- and made a call about becoming a long-haul trucker.

It didn't make sense that trucking was something I should want. That image of a trucker was so different from me -- the flannel clothes and John Deere caps, the greasy fast food gobbled while driving, the conservative, red-state values -- all of that stood in stark contrast to the adult I had become. But then I realized what almost destroyed me was buying into stereotypes -- trying to play a role I thought I needed to play, to be the very picture of what the world deems successful. Heck with that! The truth is that the dream of being a hauler had always been with me, like a soft, faded blanket you tuck in the closet until you’re cold. I sailed through my Commercial Driver's License written exam. I’ve never been my best under pressure -- my skin prickles, and I overthink the simplest questions -- but sitting in that exam room, I had that magical feeling you get when you something you’ve dreamed about is something you're finally doing.

Outside Klein’s Truck Stop, a pale periwinkle sky foretells of the breaking dawn. The old men at the counter have moved on to politics and complaining about the weather. I knock back the last swig of coffee -- truck stop gold, we call it -- and stand to stretch my creaky bones. On my way out, I breeze past the counter, making sure I’m close enough for the menfolk to get a whiff of my perfume.

The chilled morning air feels fresh as I stroll across the parking lot. A disheveled woman approaches to ask if I can spare any change. She’s made some bad choices, she says, but she’s trying to find her way back home. I tell her I can relate, place 10 bucks in her palm, and wish her good luck. I check the air pressure in the tires and do a quick pre-trip inspection. I climb into the cab of my semi, and then fire up the engine. I’m on a turnaround to Shaky Town -- got a five-hour drive ahead of me, but I should make it to Los Angeles this side of lunchtime.

The old men swagger outside toward their pickups. Rubbing their bloated stomachs, they cast eyes over the packed lot, taking in the next generation: a convoy of the most diverse truckers in American history. When they spot me warming up, they hoot and whistle, elbowing one another in the ribs. Old leather face removes his cap and makes an exaggerated bow before me, the other shoots me a thumbs up. I smile back, giving them a long bellowing honk before I disappear out onto the highway again.