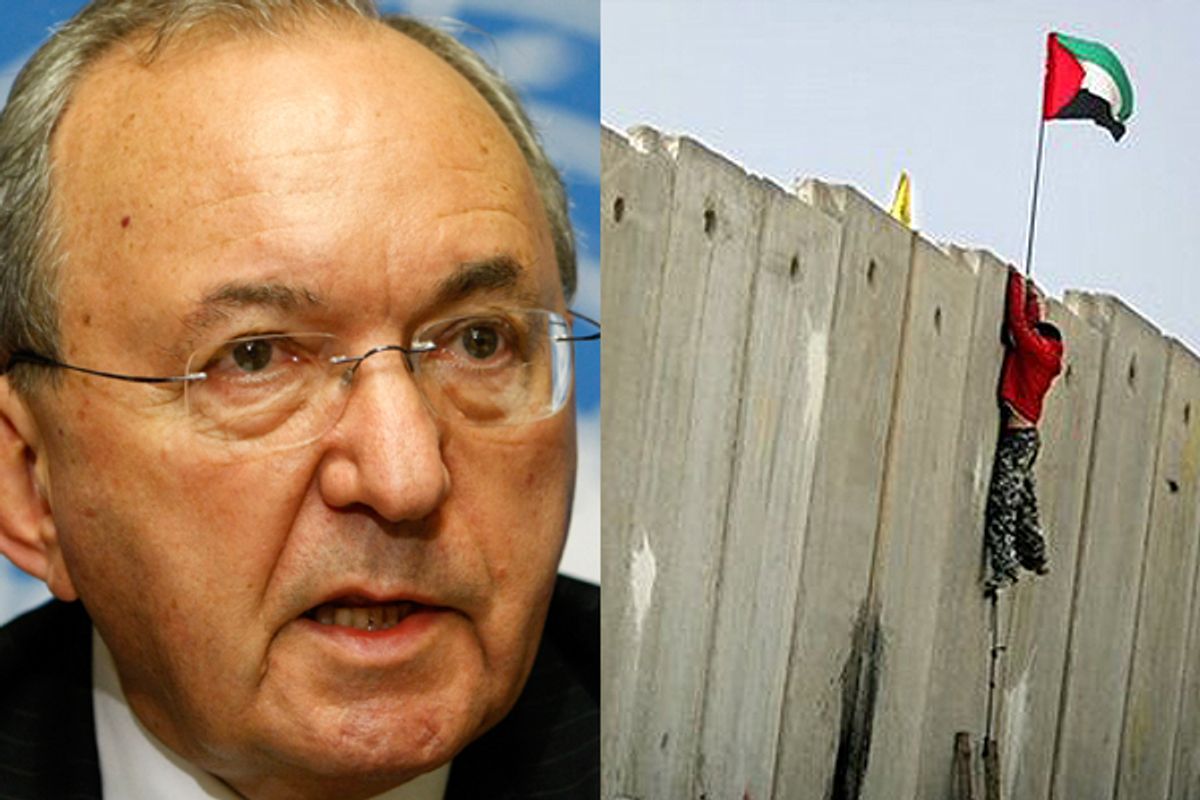 I write as an Israeli Jew who was brought up and molded at the very center of secular, Zionist Israel. My parents, Reuven and Shulamit Aloni, exemplify everything that is good and just about Israel for humanistic Jews like Judge Richard Goldstone, the noted South African jurist, who in a recent New York Times Op-Ed, denied the practice of apartheid in Israel.

My mother founded the Civil Rights Movement in Israel, was a member of the Knesset and a Minister of Education in Prime Minister Yitzhak Rabin’s cabinet. She fought for equal rights for women, gays and lesbians, and, of course, Palestinian Arabs too. My father helped create the Israel Land Administration and managed all government lands.

As a youngster embedded in a humanistic Zionist ideology I was unaware that my father’s daily business for the state consisted of, among other things, appropriating land from Palestinians who had been living on it for generations and granting it to Jewish newcomers. Only a strong ideology can explain the degree of blindness necessary to avoid recognizing that my father was implementing agrarian apartheid policies – and long before the occupation of 1967.

As I grew up, served in the army, and participated in efforts to make Israel a better place, the contradiction in my own home between the struggle for civic equality and the ongoing appropriation of more and more Palestinian land made me question the moral and legal compass by which Israel plotted its course. Ultimately, I had no choice but to face the world without the ideological lens I had looked through since childhood.

Apartheid in the state of Israel is different than it was in South Africa. The two states embody different sets of interests and power structures, and while in some ways it has been crueler in Israel, in others it is more liberal. The main difference between the two is that in South Africa apartheid was an explicit tenet of the judicial system, while in Israel the entire judicial system conceals and cleanses the praxis of government-led apartheid.

Judge Goldstone’s arguments not only offend his and my core humanistic Jewish values, they also inflict irreversible damage to the prospects of Israel’s existence as a democratic state. Goldstone denies Palestinians the right to function as a sustainable cultural, economic and political unit, while fully granting this right to the Jewish community.

The fact is that there is today a single political and geographic space between the Jordan River and the Mediterranean Sea. The whole area has been under Israeli sovereignty and control for the past 44 years. The skies, seas, borders, water rights, the judicial system as well as military and civic government are all controlled by Israel. Palestinians have municipal rule; not sovereignty.

Judge Goldstone is, in fact, legitimizing apartheid. He describes the current condition as a precursor for a future two states. That utopian vision of an always yet-to-come future enables the ongoing cruelty of apartheid. Some examples: 1) Half a million Israelis have settled in the area that was conquered in 1967. The lands these settlers occupy have been robbed from Palestinians, simply because of their ethnicity, and have been transferred to Jews simply because of their ethnicity. These seized lands are being settled by Jews from other countries, especially the U.S., with the help of huge subsidies provided by Israeli and American taxpayers. In contrast, a Palestinian in Ramallah cannot even dream of moving back into his father’s home in Haifa or Jaffa, nor even marry an Israeli and live with her in Israel. Is that not apartheid?

The Supreme Court issued an evacuation order against Palestinian families in the Jerusalem neighborhood of Sheikh Jarrah and gave their homes to Jewish families who showed proof to the titles of the homes predating 1948. Millions of Palestinian refugees, however, cannot regain land or houses on the basis of such proof.

Israel attempts to maintain a semblance of equality under the law for Jews and Palestinians inside the Green Line, but all the zoning plans and investments in infrastructure discriminate unequivocally against the Palestinian Israeli population and thus reveal an administrative apartheid that’s quite distinct from the legal apartheid reserved for Palestinians in the territories. For example, in the mixed city of Lydda there are 700 houses marked for demolition, all of them but one belong to Arab citizens of Israel. llegal Jewish houses, however, received retroactive approval.

Israeli law separates Palestinians into fictitious subcategories. By annexing eastern Jerusalem, Israel applies Israeli law on the physical territory but not on its Palestinian inhabitants, thus creating a new class of “citizens” lacking the right to vote. Even departing their house for a certain period of time can serve as the basis for the state to revoke their already crippled citizenship status and their right to live in Jerusalem. These examples show that a clear policy exists to maintain a Jewish majority, a policy whose execution involves the systematic abuse of fundamental civil rights.

Goldstone claims that the theoretical two-state solution to come provides the legal justification not to consider the Israeli regime as practicing apartheid. Yet the state of Israel created and continues to develop the settlements in the Occupied Palestinian Territories for 500,000 Jews, and only for Jews, while not building for the Palestinians from the refugee camps and elsewhere. This is sufficient to call this Israeli practice a form of apartheid.

A couple of years ago I approached my ardently Zionist mom, a woman who carried a weapon for the Jewish community of Jerusalem in 1948, and asked her a simple question: "Mom, is all this apartheid?"

With the sigh of a betrayed lover she indicated that, yes, this is apartheid. My heart broke.

Udi Aloni is an Israeli writer, filmmaker, and the author of the new book "What Does a Jew Want?: On Binationalism and Other Specters," Columbia University Press.