Will this derail a movement aiming for Roe v. Wade? 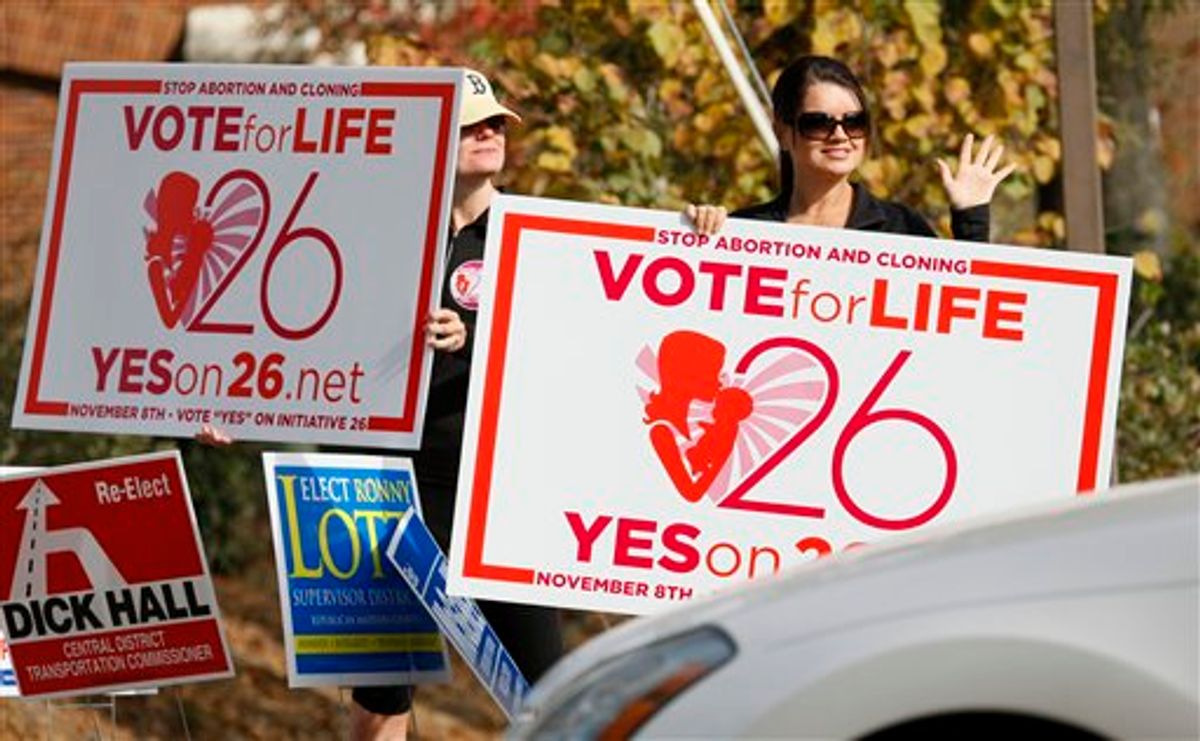 Christi Chandler, left, and Stacy Hawsey, both of Madison and supporters of the Personhood Amendment promote their initiative as they waver signs at drivers in the midst of last minute campaigning Tuesday, Nov. 8, 2011 in Madison, Miss. (AP Photo/Rogelio V. Solis) (AP)
--

If Mississippi can't pass a Personhood amendment, can any state? Those who put major political and financial muscle behind Initiative 26 -- rejected last night by an astonishing 58 percent of the state's voters -- must be second-guessing their antiabortion strategy this morning. Petition drives are underway to get life-at-fertilization measures on the ballot in several other states.

But Mississippi seemed the natural place to go -- the most conservative state in the nation, which also elected Phil Bryant, the Republican lieutenant governor and co-chair of the Yes on 26 campaign, to succeed Haley Barbour as governor. This would be the man who Monday evoked the Jews of Nazi Germany “being marched into the oven,” and who said of 26's opponents, “the evil dark side that exists in this world is taking hold. And they’re saying, what we want you to be able to do is continue to extinguish innocent life. You see, if we could do that, Satan wins." Oppose 26, Bryant argued, and "you’re on the side of the lie. You’re on the side of taking the lives of innocent children.”

Apparently, at least some of them were also on the side of electing Phil Bryant, since he got 61 percent of the vote last night. Awkward.

So what happened? Personhood looked like it had everything on its side: years of organizing and petition drives, early internal numbers showing massive support for the basic language of the amendment, resources from both Tupelo, Miss.-based American Family Association and Colorado's Personhood USA. (The latter group broadly failed to pass Personhood back home but clearly hoped Mississippi would be easier prey.) And Bryant wasn't alone: Every single statewide official supported Personhood -- including his Democratic opponent -- and you could count the local representatives who opposed it on one hand. Meanwhile, the official opposition, led by the much-maligned Planned Parenthood and ACLU, got a late start after squandering time on a failed court bid to get it off the ballot.

Then doctors, clergy and average Mississippians started voicing their opposition and even forming their own opposition groups. There were plenty of out-of-state organizers and professional strategists on board, especially in the last few weeks, but no one could call the conservative Mississippi State Medical Association, the Episcopal and Catholic bishops, and a Southern Baptist minister in the Delta tools of Planned Parenthood. The two most visible activists against 26 were rape survivor and mother of three Cristen Hemmins, who put her name to the original ACLU lawsuit and starred in commercials raising concerns about the lack of rape exceptions; and Atlee Breland, who started Parents Against 26 to focus on concerns about Personhood's effective banning of in vitro fertilization. Women like them made their own signs and YouTube videos, wrote lucid FAQs and argued with their Facebook friends who called them baby killers, in addition to canvassing and phone banking.

It helped that it was true to say, as they did over and over again, that it wasn't "just about abortion"; Initiative 26, at least judging by the intentions of its supporters, was also about banning common forms of birth control, making IVF impossible, and hampering doctors trying to save women with life-threatening pregnancies. But it was also manifestly about abortion. Initiative 26 may have gone down, but Mississippi is still a state with a single abortion clinic, staffed with a doctor flown in from out of state a couple of days a week, and with abysmal rates of teen pregnancy and infant mortality. Will any of that change now that even "pro-lifers" have made common cause with the state's small pro-choice contingent? Or is this just a temporary redrawing of the lines around the reproductive rights most palatable to conservatives, like rape exceptions, just to play defense against increasingly audacious Republican threats?

At the very least, we know that there is such a thing as conservative overreaching -- even in Mississippi. And maybe this victory will embolden that new coalition. On the No on 26 Facebook page, people who seem to have been previously unengaged have been excitedly talking for days about continuing their work after the election.

"It’s so helpful to know that you’re not alone," Hemmins told me just before the election. "There’s been some talk of staying together after the vote as a group, I'm not sure for what purpose or to what extent ... The religious right seems to be coming at women from so many different directions. Unfortunately, I can see us needing to rally the forces in the future."

Indeed. On the Personhood Mississippi page, they're already talking about taking the cause to the Legislature.