The \"New Girl\" star has taken cuteness way too far, and it now overwhelms a once-promising talent 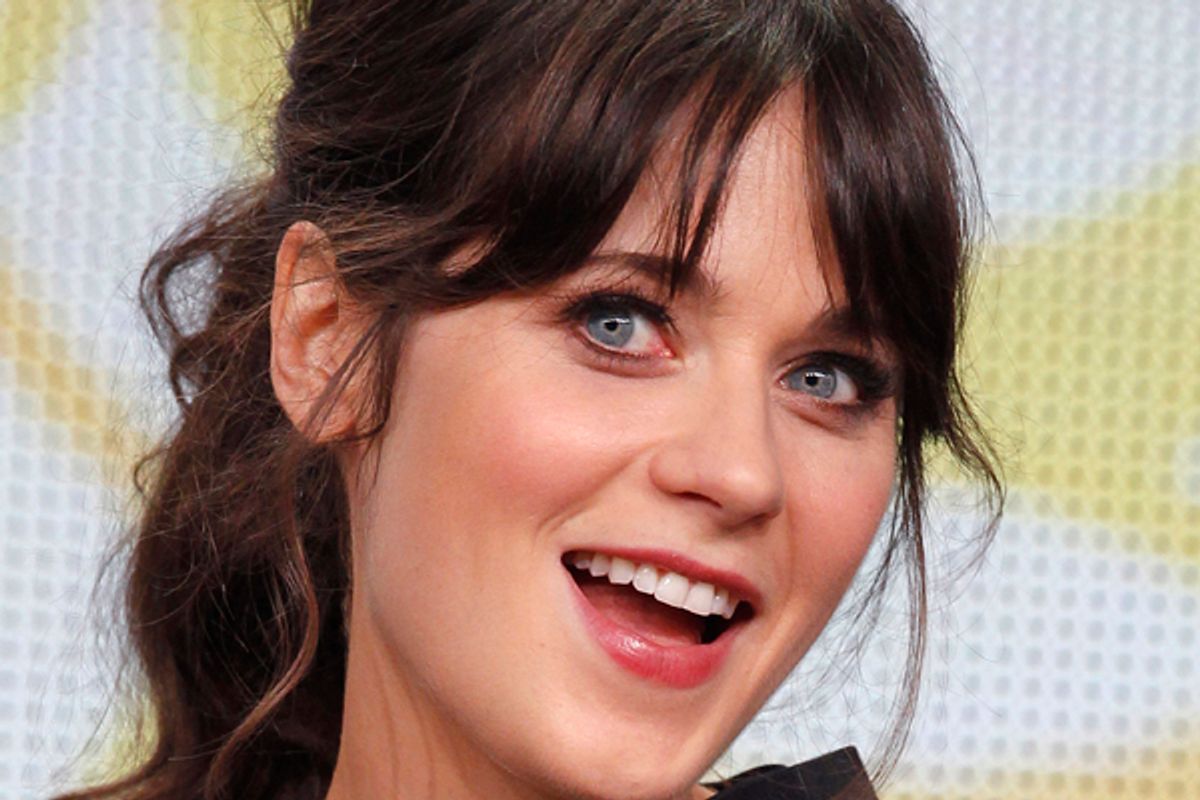 I'm worried about Zooey Deschanel. Lately I just can't shake the fear that Dr. Drew is lurking outside her house, waiting for the right moment to pounce with a cuteness intervention. If somebody doesn't do something soon, that lady is going to wind up the Amy Winehouse of adorableness, too whacked out on her own treacle to stop herself.

In her hit sitcom "New Girl," Deschanel plays an exaggerated version of Zooey Deschanel -- i.e., your worst nightmare. Her Jess is a recently brokenhearted (awwwww) schoolteacher (shut UP, you guys) who winds up rooming with three males of varying degrees of stinky awfulness/lovableness. Deschanel's character wears glasses and pajamas with little hearts on them and references stuff like "An American Tail." She refers to the male genitalia as "his pee pee and his bubbles." It's like one of the kids from "Toddlers and Tiaras" wound up in a sitcom. Deschanel also sings the theme song. If you crossed "That Girl" with "The Mary Tyler Moore Show," a baby duck and a bag of marshmallows, you'd start to approach what "New Girl" is like. It is a show that describes itself as "simply adorkable," a phrase that is positively revoltasweet.

But Deschanel's television success is just the latest in her onslaught of appeal. I mean, even her name is the funnest thing ever. Her musical enterprise She & Him just released an album of holiday music -- which you may purchase on red vinyl, with special She & Him wrapping paper. She is also of the co-founders of Hello Giggles, "the ultimate entertainment destination for smart, independent and creative females." On the site, she enthuses about "sweet tiny portable paint sets" for "your bestie" and iPod speakers shaped like cats, as well as referring to people in terms like "a ray of sunshine." And when Deschanel sang the songs for the last Winnie the Pooh movie, it was the most twee thing that happened since God created sleepy Pomeranians. Somewhere, those two otters holding hands are killing themselves in defeat.

It's not that Deschanel isn't both authentic and adept at her supercute endeavors. She really does play the ukulele. She professes a genuine love of board games and baking. She can't help having eyes the size and color of Wedgwood ashtrays. She killed doing a restrained, lovely national anthem at the World Series. Nor is she some vapid Hollywood honeybunch. A portion of the sales of her latest album will go to 826 National, the reading center founded by McSweeney's. And she has real struggles and pains, like regular mortals; Deschanel recently separated from husband Ben Gibbard, of Death Cab for Cutie.

But that's precisely why it's increasingly unnerving to watch a woman in her 30s turn herself into a caricature of her most manic pixie dreamgirl self. After all, the lady who looks so convincingly like she was dreamed up in a Manga factory has not always been so precious. Remember when Deschanel was the impossibly cool older sister Anita in "Almost Famous"? Remember when she was the foulmouthed, deeply disenchanted checkout girl Cheryl in "The Good Girl"? Or the vulnerable and unkooky Noel in "All the Real Girls"?  Or the slow-to-warm-up holiday worker Jovie in "Elf"? Even in the desperately overpraised "500 Days of Summer" Deschanel was at least kind of a bitch. Where'd that girl go? The one with the deadpan delivery and the attitude? Because lately, it seems like her edge has been rubbed down into a pile of soft, downy fluff.

The world is not kind to cutie-pies forever. Just ask Meg Ryan. And much like Charlie Sheen devolved into Charlie Sheen without all the 911 calls on "Two and a Half Men," Deschanel seems likewise in danger of lapsing into shtick -- a toothless, "I'm just a girl" shtick. With her formidable combination of talent and beauty, it would be unfortunate if Deschanel melted into a syrup-sodden parody of herself. Her wry sass helped propel her to stardom every bit as much as her girlie quirkiness -- and as she grows as an artist, it's what will sustain her as she matures beyond being the wackadoo in polka dots. Besides, if she can temper her kookiness with the ample grit she's displayed in the past, puppies everywhere will be grateful for a little less competition.