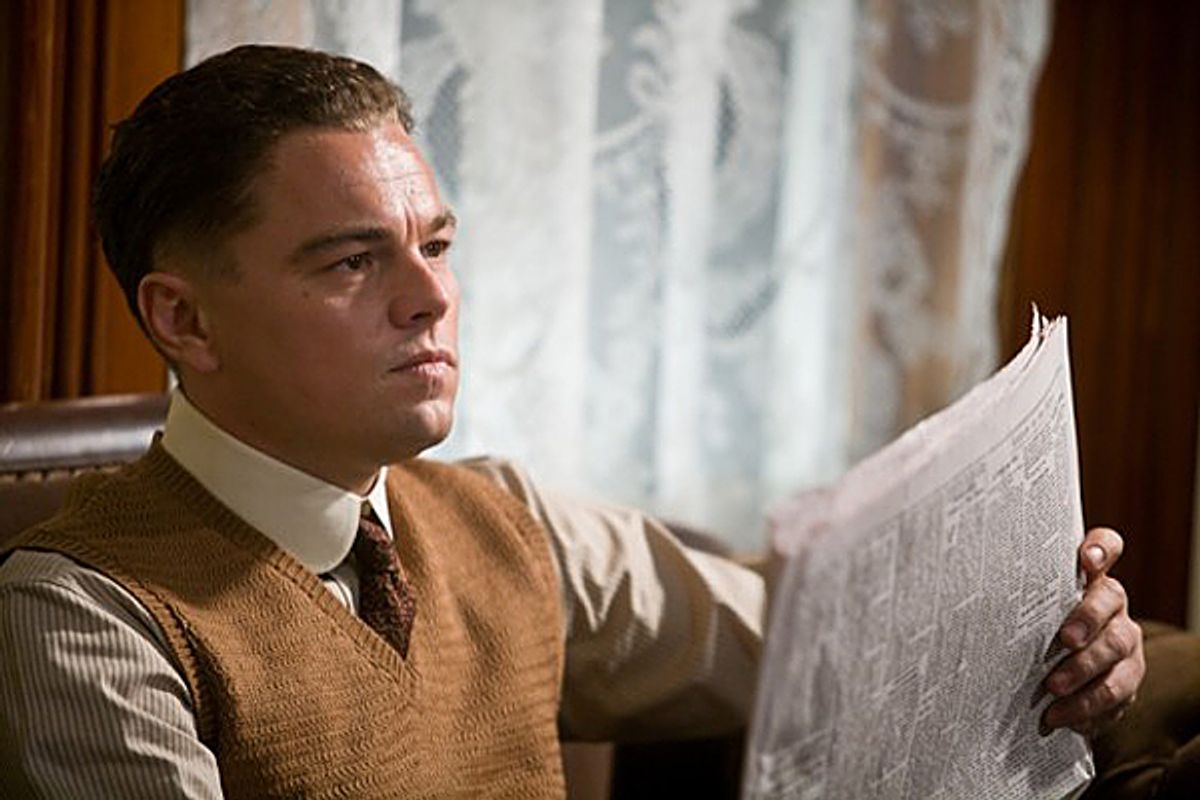 We gather today to pay tribute to two genuine American icons, but without saying anything nice about either of them. Clint Eastwood has made a movie -- or at least I think that's what it is; the lighting is often so dim it's difficult to make out -- about longtime FBI director J. Edgar Hoover, who acted as the wacko third rail of American law enforcement for almost half a century. "J. Edgar" is one of those prestige Hollywood pictures that sounds, at first, as if it might be a good idea: a name director, a supposedly big star playing a major historical figure, and a script by young screenwriter Dustin Lance Black, who since "Milk" has become the go-to scribe for what is no doubt described in story meetings as "gay material." But instead of a good idea, "J. Edgar" turns out to be one of the worst ideas anybody's ever had, a mendacious, muddled, sub-mediocre mess that turns some of the most explosive episodes of the 20th century into bad domestic melodrama and refuses to take any clear position on one of American history's most controversial figures.

I'll get to the historical and political insults of "J. Edgar" shortly, and they are legion. But most of all it's a boring and silly movie, which features Leonardo DiCaprio bumbling around his dreary, post-Victorian suite of offices, looking worried under a mountain of latex and makeup (when he plays the 1970s-era Hoover) and talking in one of those unplaceable, old-timey Northeast Corridor accents. (Admittedly, Hoover in life had a strange voice; he lived from birth to death in Washington, D.C., but spoke in an affected manner that sounded nothing like today's mid-Atlantic accent.) It's like a combination of acting-school exercises and the History Channel, with all the production values and dramatic intensity that suggests. Hoover's longtime deputy director and presumed lover, Clyde Tolson, is played by Armie Hammer as -- how do I put this delicately? -- an absolute flaming queen, who uses the term "fashion-forward" during a department-store shopping expedition set in about 1930. For just a minute there, it looks as if "J. Edgar" is about to become "Queer Eye for the FBI," and I'm profoundly sorry it doesn't.

Actually, if there's one area where Black's lumpy screenplay, with its awkward chronological backing-and forthing, deserves some credit, it's in the highly plausible account of Hoover's relationship with Tolson. From early on in Hoover's FBI career it was widely assumed that he was gay, but the evidence was always circumstantial and the handful of people who knew him personally always denied it. (The allegations that he was a cross-dresser came from only one source, and don't match anything else we know about this intensely cautious and private individual. Most historians view them as urban myth.) I think the fairest thing to say is that it seems likely Hoover was primarily homosexual, despite his purported romance with actress Dorothy Lamour, but not at all clear whether he acted on those impulses. Black imagines Hoover and Tolson cohabiting as "confirmed bachelors," in a state of permanently unresolved erotic tension, which would go a long way toward explaining the secret policeman's massively screwed-up psychology.

But when we get back to the question of how Hoover's psychology affected his exercise of power, "J. Edgar" goes from being just a minor melodrama about a conflicted and closeted gay man to being simultaneously stupid, offensive and random. Historical characters appear and disappear in shticky little pieces -- Jessica Hecht as Emma Goldman, Josh Lucas as Charles Lindbergh, Jeffrey Donovan doing the world's worst "pahk the cah in Hahvehd Yahd" accent as Robert F. Kennedy, Christopher Shyer as Richard Nixon -- without ever seeming to justify their presence on the stage. You get the feeling they've all got a problem with Hoover, but you're never sure why. Maybe they just found him a weird and distasteful little man, which is certainly how he comes across. On the other hand, it might be helpful if this movie made the point that Hoover was as close as we've ever come (so far) to having an unelected dictator, and that the only real reason he didn't become a Stalin-level tyrant was the constraint of a democratic political system he could not entirely subvert, much as he tried.

Eastwood and Black certainly bring up many of the things that made Hoover so noxious, beginning with the Palmer raids of 1919-20, which resulted in the arrests of thousands of communists and anarchists who had committed no crime. At the tender age of 24, Hoover was appointed to head a special Red-hunting branch of what was then called the Bureau of Investigations, which launched his long career as a self-appointed guardian of American political rectitude, devoted to stamping out dissident opinion wherever it cropped up, and whether or not constitutional rights got trampled in the process. "J. Edgar" makes clear that Hoover conducted secret surveillance on suspected Commies in Franklin D. Roosevelt's New Deal administration, including first lady Eleanor Roosevelt (who purportedly had a lesbian affair with a reporter); perjured himself before Congress; conducted an especially vile counterintelligence program aimed at undermining the Rev. Martin Luther King Jr. and other civil-rights leaders; and generally turned a blind eye to organized crime in his relentless persecution of left-wingers.

But you get almost no sense of the extent or intensity with which Hoover mobilized the federal government's police force to crack down on unconventional political opinion. The second Red Scare of the Joe McCarthy 1950s is never mentioned, nor is the word COINTELPRO, and Hoover's vicious racism is largely ignored. (Intriguingly, the rumors that Hoover was gay were echoed, during his lifetime, by speculation that he might be partly black.) Furthermore, all this stuff is presented as quirky side info in a story about a weird dude who lived with his mom (Judi Dench, giving the only tolerable performance in the whole film) and had a lifelong boyfriend he maybe never slept with. Oh, and he was way ahead of his time when it came to fingerprinting. Did I mention that? Everybody pooh-poohed his interest in bringing forensic science to law enforcement, and now look! Yes, Hoover was a liar, a cheat, a hypocrite, quite likely a paranoid sociopath and incipient fascist, a terrifying incarnation of many of the worst currents of American political opinion in one individual. OK, yeah, that's all true -- but his real legacy is found in "CSI: Miami."

Just in case you think I have some kind of personal bias when it comes to J. Edgar Hoover, well, I plead 100 percent guilty. He ruined the lives of countless innocent people and was instrumental in spreading the idea that the Constitution doesn't apply to people who say bad things about the government. He pretty much built the slippery slide that led to the national-security state of the last decade, when civil liberties have been eviscerated and privacy is a sham. (I will further add that he personally supervised the surveillance and harassment of my mother, her then-husband and many of their colleagues in the 1940s labor movement, and I've seen the files to prove it.) If there's a darker figure in American history since the Civil War, I'm really not sure who it is. Nixon? George W. Bush? Not even close. Dick Cheney? Only in his undead dreams. I only wish I believed in hell so I could believe that it wasn't hot enough for John Edgar Hoover.

But in all honesty, I'd much rather see a vigorous, propagandistic, right-wing defense of Hoover as a bastion of true Americanism than this tepid, long-winded and phony-looking exercise, which sort of implies that, on the one hand, he wasn't a very nice man but, on the other, he was an actual human being who suffered pain. But honestly, what can we expect from Clint Eastwood at this point? This movie says a great deal more about him, I'm afraid, than it does about J. Edgar Hoover. And what it says is that one of the greatest American screen actors of the 20th century has squandered much of that legacy in the 21st by becoming a director of indifferent Oscar-bait movies that look handsome on the surface but have nothing to say, and that nobody ever wants to watch twice. Even by the dismal recent standards of "Hereafter" and "Invictus" and "Changeling" this movie is a disappointment, because watching it once is bad enough, and because it may leave younger viewers with the impression that J. Edgar Hoover was mostly important to history because he wasn't gay enough to have decent fashion sense.