Stop pretending it's not climate change

2011 is further proof that a new era of extreme weather is dawning -- and it's about to get much, much worse 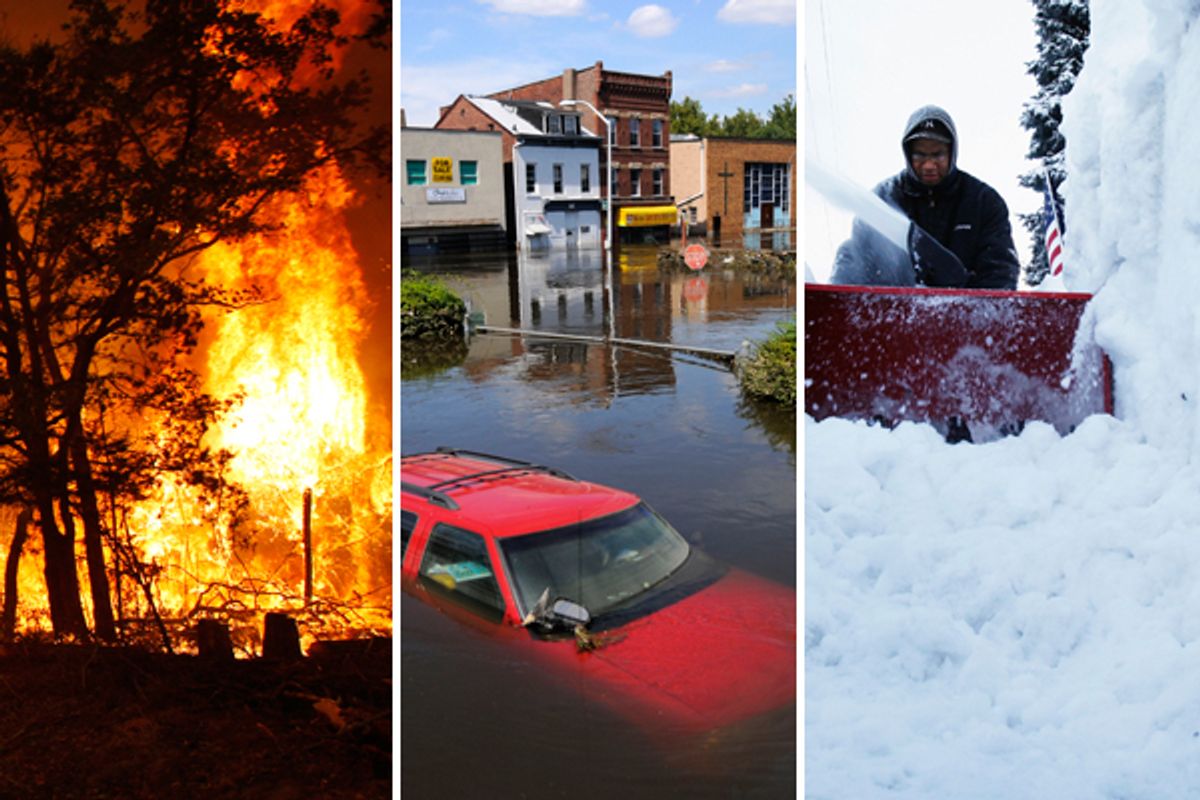 "All I know is this didn't happen when we were kids."

That's how Brian Williams tagged a recent NBC Nightly News report on this year's extreme weather. Floods, droughts, wildfires and tornadoes dominated the news many nights in 2011. Even this week, weather forecasters are keeping tabs on reports from coastal villages in Alaska, like Kivalina, which is under a coastal flood warning from "one of the most severe storms on record” packing hurricane-force winds while it pushes up the Northwest Alaska coast. Lack of protective Arctic sea ice – which is disappearing because of climate change – is making the surge from storms like this more dangerous. Kivalina's very existence is threatened due to flooding and erosion fueled by climate change, and the Native Alaskan community struggles to relocate. It's no wonder the Inuit have a word for the changing weather -- "uggianaqtuq" -- which roughly translates into "stranger." As in "the weather has become a stranger.”

The big question is, why has the weather become so strange? Is extreme weather like a heart attack (as my Climate Central colleague Mike Lemonick recently suggested in his Op-Ed in the LA Times) or bad credit, symptomatic of our own bad choices? Is this recent run of extreme weather somehow our fault?

The fact is: Human-caused climate change has increased the odds of extreme, even unprecedented weather events. Senior scientist Jerry Meehl of the National Center for Atmospheric Research (NCAR) puts it this way, "Just as steroids make a baseball player stronger, and increase his chances of hitting home runs, greenhouse gases are the steroids of the climate system.” So in the case of climate, the extra juice (greenhouse gases, not performance-enhancing drugs) doesn't result in more home runs but in the greater likelihood that heat waves and other forms of extreme weather will occur.

Climate scientists have long warned that if we continue to burn fossil fuels like coal, oil and natural gas as our dominant source of energy, the planet will warm, extreme events will increase, and we will become more vulnerable to disasters. Overall, the planet has warmed about 1.2°F over the past century. Since I was born in 1970, the United States has heated up at a pace of 0.5°F per decade. As Lemonick points out, ”Scientists know that the increasing load of greenhouse gases we're pumping into the atmosphere doesn't "cause" extreme weather. But it does raise the odds, just as a diet of triple bacon cheeseburgers raises the odds of heart disease.”

All weather is now born into an environment that is warmer and moister because of man-made, heat-trapping greenhouse gas pollution. Thanks in part to warmer oceans, there is 4 percent more water vapor in the atmosphere and that amount will continue to increase as the planet warms, providing more fuel for storms.  Droughts, wildfires, heat waves and heavy downpours are going to become more frequent, more intense and longer lasting. In fact, we can already see this playing out in historical data. (For a complete overview, check out "Global Climate Change Impacts in the US.”)

Last month in the scientific journal Proceedings of the National Academy of Sciences (PNAS), researchers described a new way to link long-term warming trends and specific heat records. Their study concluded that there is an 80 percent chance that the 2010 Russia heat wave would not have occurred without climate change. And last week, Seth Borenstein at the Associated Press shared details from a leaked draft summary of an upcoming special report on managing the risks of extreme weather. The draft summary, from the United Nations Intergovernmental Panel on Climate Change (IPCC), says it is likely that climate change has already increased the frequency and/or intensity of heat waves, droughts and heavy rains and that the extremes caused by global warming could eventually grow so severe that some locations become "increasingly marginal as places to live." Kind of like Kivalina, Alaska.

The media often avoids making the connection between weather and climate change -- and while weather coverage has dominated the headlines all year, these climate facts go largely unmentioned. For example, last August the New York Times ran a gripping piece on the intense drought that plagued 14 states along America's southern tier. The story put a human face on the economic toll of this slowly unfolding disaster. However, when it came to providing readers with a deeper understanding of the shifting dynamics of drought, the reporters neglected the elephant in the room - climate change. Given how high the stakes are - how important adaptation is in the face of changes that not only are here to stay but are going to become increasingly worse, it's critical that we stop talking about weather in a vacuum, disconnected from the larger picture of a warming planet.

This is even more important at the local level. A recent Pew survey echoes long-standing research that more Americans report watching local TV news than any other source, especially when it comes to the weather. Despite broad public interest in understanding the causes of extreme weather events, climate is rarely part of the coverage. Local television viewers in Bastrop, Texas, which suffered devastating wildfires this past summer, deserve to know that with every additional degree of warming, the number of acres burned in Southwest wildfires is projected to increase dramatically. And viewers in Joplin, Mo., deserve to know that the connection between climate change and tornadoes is still unsettled. (Two of the key ingredients that go into making a tornado are expected to change as a result of global warming -- water vapor (moisture in the atmosphere) and wind shear (changing wind speed and direction with height). Water vapor has already increased, but wind shear may decrease. So, whether tornadoes become more frequent/more intense all depends on which influence wins out.) Americans deserve a fair warning about how climate change will affect them in their own backyard.

The climate context is certainly not lost on those who keep track of damage. According to Munich Reinsurance America, the number of natural disasters has tripled over the past 20 years, and "it would seem that the only plausible explanation for the rise in weather-related catastrophes is climate change.”

If climate science can teach us anything, it's that if the dire warnings to protect our climate go unheeded, by 2050 the weather will be far more than just a stranger. It will be an enemy.

Click on the slide show below for a detailed look back at headline-grabbing extreme weather events of 2011. Preliminary estimates place the total damage of property and economic impacts for all weather-related disasters this past year at more than $35 billion. We've already set a record for the most billion-dollar weather disasters.

Heidi Cullen, a scientist at Climate Central, a journalism and research organization, is the author of “The Weather of the Future: Heat Waves, Extreme Storms, and Other Scenes from a Climate-Changed Planet.”