"Sons of Anarchy" has its "Sopranos" moment

In a brutal episode, one of the show's best yet, it's clear that the bikers are just prisoners of their own making 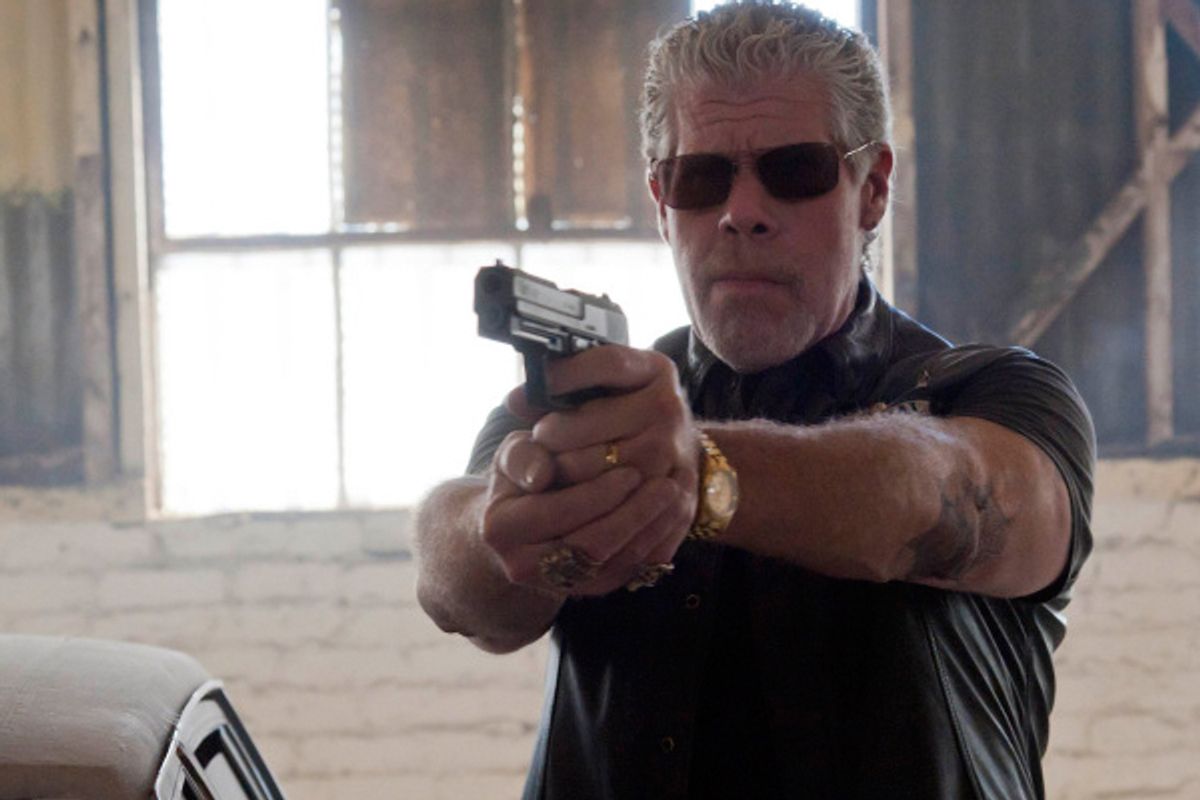 Last night's "Sons of Anarchy" was the best episode this season, and one of the best single episodes the show has produced. At its best, it reminded me of a late "Sopranos" episode, "Members Only," with which it shared certain fascinations -- mainly a ruthless awareness of what sort of characters the show has chosen as its heroes.

"Sopranos" fans will recall that sixth-season episode. It was uncomfortable not just because of its horrifically violent acts, which included the shooting of a major character, but because of its tragic awareness that there was really no way out for these gangsters -- the life that they thought of as completely free was in fact a prison without bars, a walking death. It was the episode in which a mob informant decided he'd had enough of the life and naively asked to leave it, only to be reminded that this was not the sort of job one could just leave. He ended up hanging himself by a rope -- not unlike the half-black Juice on "Sons of Anarchy." Pushed into ratting on the Sons by a new sheriff who threatened to expose his lack of racial purity to the motorcycle club, Juice ended up trying and failing to hang himself from a tree like the "Strange Fruit" described in Billie Holiday's song, the episode's de facto theme. (It was an attempted self-lynching, one of the most spectacular acts of internalized racism and self-loathing that's ever been seen on American TV; the racism of the club and the government's exploitation of it drove Juice to wrap that chain around his neck.)

Last night's "Sons" episode, titled "Hands," attained a merciless "Sopranos"-like power that trumped this year's two big Juice episodes. And it made similar points about the illusion of freedom in the criminal world.

The episode's agenda was signaled in that early sequence at the gas station in which Jax made small talk with the motorcycle cop about his bike. The officer confessed that he liked the old model better, but this one was easier on his bad back. "Maybe it's time to trade it in for a cage, huh?" Jax said, meaning a car. "When I'm dead," the cop replied. "Amen to that," Jax answered.

It was a moment of random camaraderie between crook and cop, but it resonated throughout the episode, which treated the Sons of Anarchy motorcycle club, the town of Charming, and the criminal life itself as gigantic cages in which all the characters were trapped -- perhaps without possibility of escape. Clay, the club's president, desperately wants to be released, but he's going to have to sell out the club and everybody in it to make his dream come true -- and he probably will, if he doesn't get exposed as a manipulative scumbag and murdered first. His vice-president, Jax, wants out, too; by the end of the episode he has confessed that urge to Opie, and shamefacedly admitted that when he talked Opie out of his own exit strategy, he effectively signed Donna's death warrant. Poor Tara is in love with Jax but wants out of the life, even though she knows she's not allowed to admit it; she tried to physically escape -- symbolically, that's what the job interview in Providence was about -- and ended up the victim of a kidnap-murder attempt touched off by the fiendish, ass-covering sociopathic schemer, Clay. By the end of the episode she was bedridden, one of her delicate surgeon's hands shattered -- probably beyond repair. The combination of violent trauma and pain medication pushed the truth out of her.

The attack, she told Jax, was "... fate ... We're supposed to be together, right? But you can't leave here ... The club won't let you. Gemma won't let you. Charming won't let you ... The only way I can be with you is if I lose my way out. I lost that today, baby. My dead hand. No one will want me now, no one. I'll never save another life again. I'll never fix a tiny heart. It's OK, because now we can be together. You. Me." And here she turned tearful and bitterly sarcastic: "Gemma. Here in beautiful Charming. Happy family. Maybe I should smash my other hand. I get to stay home and be mom." By the end she's screaming at Jax: "Get out!"

You can say that Kurt Sutter's show is turgid or nasty, brilliant or overrated, but you can't say it has no moral point of view on its characters. Even though it mostly avoids narrative hand-holding, it's as moral -- at times verging on moralistic -- as "The Sopranos" or any classic gangster film. The heat in last night's episode was purgatorial. As directed by Peter Weller and written by Chris Collins, David Labrava and Sutter, "Hands" was acutely aware of the repressive power that the club exerts over all of its members -- even Clay, who's the season's only out-and-out villain -- as well as the power that other institutions and ways of thinking exert beyond the club. The script casually linked the club's ingrained racism with the subtler institutionalized racism of American law enforcement; the town's black sheriff, Eli Roosevelt, was revealed to be a virtual slave to the white assistant U.S. attorney Lincoln Potter, bound by a contract to do pretty much whatever he was ordered to do. ("I'm done being your boy," Eli told Linc, then apologized to Juice in a moment whose racial solidarity was more powerful for being understated.) Both Tara and Gemma were confirmed as prisoners of gender -- collateral damage from the striving and showdowns of selfish, macho guys. Gemma tried to interfere in Clay's clumsy campaign of terror and received a horrendous beating for her trouble; it was preceded by Clay's icy statement that she was not a member of the club, but an Old Lady, and that he should remind her of her place more often.

As she prayed for Tara's recovery in the hospital chapel, Gemma got called out for daring to think herself more free or moral than the thugs that destroyed a young surgeon's hand: "You're an awful woman, and all this suffering landing on Tara, it's because of you." This was truth, just as Tara's tearful excoriation of Jax was truth. SAMCRO brought them all to this. The thing they all love is repressing them, twisting them, killing them, because that's what it does. By the end of the episode, Gemma had resolved to have Clay murdered "by the hand of a Son" because -- as she'd already been reminded this season -- "Clay can't be saved." But having Clay murdered won't liberate her, either. She'll still be a prisoner of the allure of the club, the allure of the lifestyle, the cage of the open road. These characters all inhabit their own cages; some inhabit cages within cages within cages. Few will escape.