Russell Pearce, influential ideologue of the right, is retired by a resurgent citizens movement 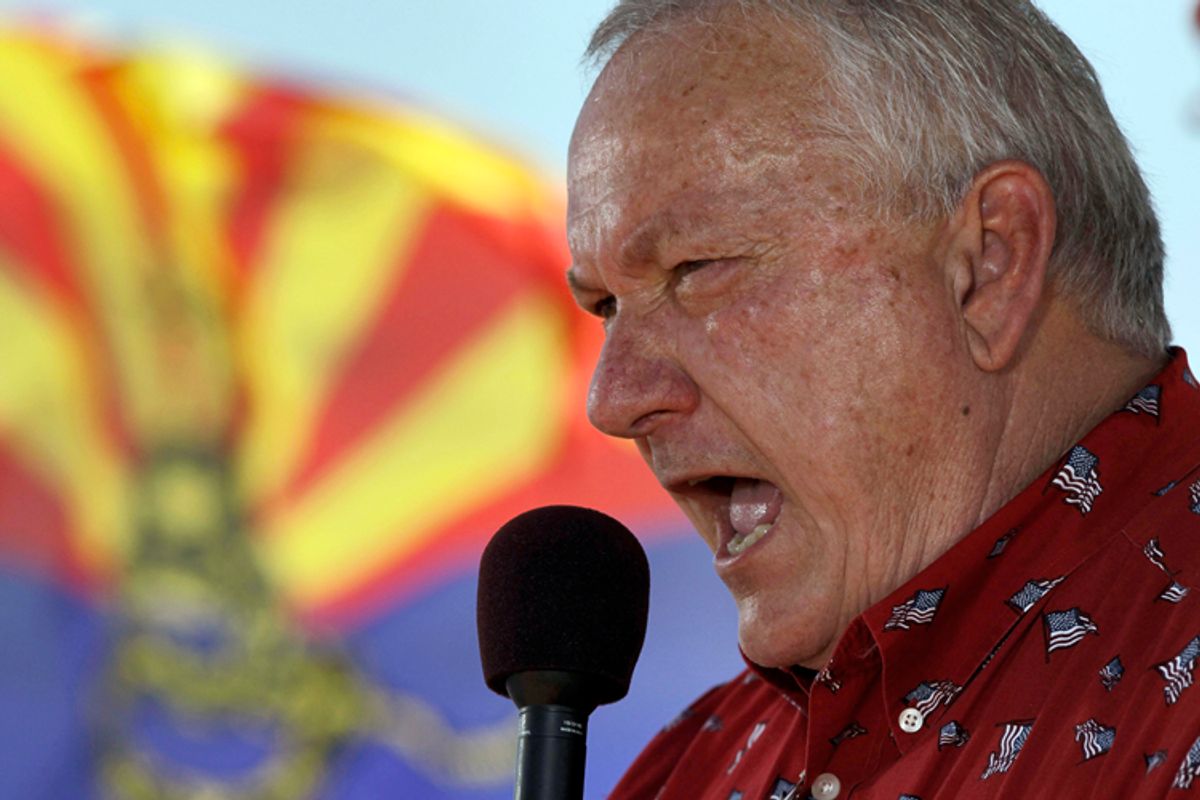 MESA, Ariz. -- Almost a year to the day after he took power as the self-proclaimed "Tea Party president" and thrust Arizona's hard-line immigration and anti-federal laws into the national arena, state Senate president Russell Pearce watched in bewilderment yesterday as an extraordinary citizens campaign of Democrats, Independents and moderate Republicans dethroned him in a historic recall election.

"Today marks the beginning of a new era in Arizona politics," declared Randy Parraz, the co-founder of the Citizens for a Better Arizona, which spearheaded the recall campaign to great derision last January. "The reign of Senate president Russell Pearce has finally come to an end."

As the darling of the right-wing  American Legislative Exchange Council and an influential ideologue in the nativist-tinged anti-immigrant movement, however, Pearce is not the only loser in the election upset.  With more than 90 percent of his campaign funds coming from corporate lobbyists and out-of-district contributions, allowing him to vastly outspend his opponent, Pearce lost by a nearly 10 percent margin -- 53.4 percent to 45.3 percent -- to Republican newcomer Jerry Lewis, a moderate Mormon leader who largely ran his grass-roots campaign as a referendum on Pearce's extremist views.

Pearce's downfall serves as the opening salvo for the 2012 presidential election and places the hotly charged issue of immigration policy back onto the front burner. Pearce was the architect of the state's controversial SB 1070 immigration law, which has been embraced by the front-runners in the Republican presidential primary and replicated in states like Georgia and Alabama.

"This is a huge shift for the Republicans as much as the Democrats," Parraz said last night, in front of the Citizens office in Mesa.  "But it will only have a sustainable impact if we continue to get out and do the work, and not sit back and wait for the change."

Without the support of major organizations or political parties, Parraz and his co-founder Chad Snow launched their recall campaign less than 10 months ago in what many viewed as a quixotic venture.  Invoking the "si se puede" spirit of Arizona-native labor leader Cesar Chavez , the Citizens for a Better Arizona inspired a  bipartisan campaign of disaffected Republicans, demoralized Democrats who had lost every statewide campaign in 2010, and a bevy of Independents.  With an estimated 500 campaign volunteers taking part in door-to-door canvassing efforts, and a full-scale get-out-the-vote operation, the Citizens group signed up 1,150 new voters.

"Immigration issues are not Republican or Democratic," said Parraz, who went to great lengths over the past several months to stress that the recall transcended a single issue and showcased Pearce's leadership role in cutting education and healthcare, and overseeing the state's economic decline. "We have to work together to make effective change."

Despite Gov. Jan Brewer's public face on Arizona's immigration policies, Pearce was largely seen as the de facto governor, who had railed about an "invasion" from Mexico and an immigration crisis on the border to ram through his openly anti-federal and states' rights agenda on healthcare and gun laws, and an effort to even "nullify" federal jurisdiction.  Less than a year ago, Pearce called for the impeachment of President Obama, and claimed the White House was waging "jihad"on the country.

"Russell Pearce is too extreme, but he is not alone," Parraz said, who has often chastised state and national leaders for allowing the Tea Party figurehead and other hard-liners like Maricopa County Sheriff Joe Arpaio to go unchallenged.  "This election shows that such extremist behavior will not be rewarded, and will be held accountable."

Galvanizing a huge turnout of voters, including largely overlooked Latino communities, which make up more than 30 percent of the electorate, Parraz and his Citizens group have emerged as a powerful political force in the state.

On the eve of Arizona's centennial celebration in February, the recall is a reminder of Arizona's often-forgotten history. Arizona's first citizens movement was founded to counter the role of outside corporations and carpetbaggers in the formation of the state in 1912. The movement rallied for the right to recall elected officials who no longer represented their interests in the writing of the state's constitution.  After President Taft approved the progressive Arizona constitution, the state Legislature's first act made electoral recall an enduring part of Arizona's legacy.

Today's slogans about the 99 percent would not have been a surprise to Arizonans a century ago.

"The working class, plus the professional class, represent 99 percent," said Arizona's first governor, George W. Hunt, after a major labor showdown in 1916. "The remaining 1 percent is represented by those who make a business of employing capital."

"It will be a happy day for the nation when the corporations shall be excluded from political activity ... and vast accumulations of capital cannot be employed in an attempt to control government," he declared

With the retirement of Russell Pearce, Arizona is slightly closer to that happy day.