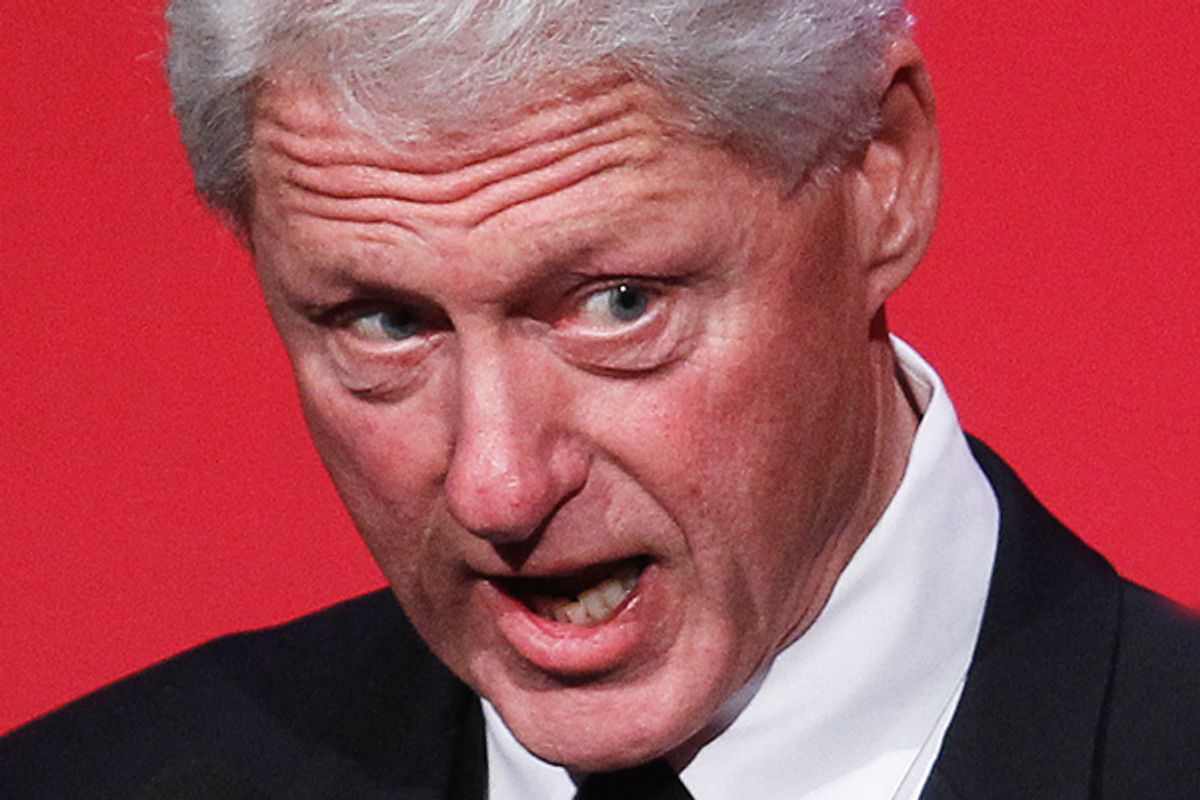 As Democrats survey the political wreckage of the last three years, the temptation to imagine more pleasant alternate realities is irresistible. What if Hillary Clinton had been elected president instead of Obama? Would events have played out any differently? Or, even more tantalizingly (albeit technically impossible), what if the Big Dog himself, Bill Clinton, had been in charge the last three years? Would he have done a better job fixing the economy? Been more effective knocking heads with the Tea Party? Established himself as a better bet to win a second term?

These are questions that obviously can't be answered with any certainty. We'll never know how a Clinton (or a McCain, for that matter) would have tackled the recession or jousted with John Boehner, just as we'll never know what would have transpired if there had been no stimulus at all, or if Obama had taken a more confrontational stance against his Republican opposition from the get-go, rather than pursue a doomed strategy of bipartisan cooperation. We're stuck with the world we've got.

But in the wake of the publication of Bill Clinton's new book, "Back to Work: Why We Need Smart Government for a Strong Economy," there is simply no choice but to plunge into these hypothetical waters, however impracticable they might be. Because even though, when you boil it down, the agenda set forth by Clinton is not substantivally different from what Obama has attempted to execute, the implicit theme of "Back to Work" is that there's a better way to go about the business of government than what we've witnessed in the last three years. As TalkingPointsMemo's Josh Marshall joked in a tweet, the real title of "Back to Work" should be "If I Were Still President I'd Be Ownin' These Bitches." Clinton periodically offers lukewarm support to Obama, but he'd much rather be recounting the successes of his 1990s glory days. Just put him back in the Oval Office, and we'd get this mess fixed, stat!

Dream on, Bill. One could reasonably argue that Clinton would have done a much better job facing down McConnell, Boehner and Cantor on the debt ceiling and government shutdown showdowns. But his program for smart governmental intervention in the economy would have constituted exactly the same kind of anathema to a Republican Party determined to prevent him from accomplishing anything as everything hitherto proposed by Obama. Clinton would also have discovered that when you come into office on the heels of a fiscal quarter in which the economy contracted by almost 10 percent, while facing a Senate opposition determined to filibuster your every move at a historically unprecedented rate from Day One, recovery would be slow and painful and politically costly. Furthermoe, any notion that Bill Clinton might have been tougher than Obama on the banks or Wall Street, while fighting for his beloved middle class, seems especially dubious. Let's not forget, Obama's economic team was largely staffed by veterans of the Clinton administration, and some of the key deregulatory measures that contributed to the financial crisis were passed during Clinton's administration with the enthusiastic support of those very same men.

"Back to Work" includes a cogent analysis of where the U.S. has gone astray, is full of sensible ideas to encourage job creation and economic growth, and makes a robust defense of the notion that strong government is a good thing. But so what? The people who will buy and read this book not only already agree with just about everything that's in it, but they also already know it all. There's almost nothing here that hasn't been proposed by the Obama administration, or that isn't already a stock part of the mainstream Democratic agenda. Which makes it all completely meaningless in the context of current political gridlock. Clinton wants us to get back to a government based on doing things that work -- but as has become abundantly evident in the past few years, congressional Republicans are content with a system that doesn't work. And neither Obama nor Clinton has any leverage to change that reality, unless Democrats enjoy a surprising victory in the 2012 election.

Any imaginary history that plucks Bill Clinton out of 1992 and time-travels him into 2008 has to grapple with some mighty big historical transformations. For most of his two terms, Bill Clinton enjoyed a huge wind at his back -- a stunning period of economic growth that was in large part fueled by two things he can take zero credit for: the end of the Cold War and the massive tech boom. And even without the black hole of the worst economic downturn since the Great Depression sucking at his presidency from the moment he moved into the White House, Clinton still managed to make a pretty big mess of things in his first two years. His efforts to push through the first priority on his political agenda -- healthcare reform -- failed miserably and contributed heavily to one of the worst midterm election defeats faced by a sitting Democratic president in a century. The Obama midterm debacle was even bigger, but in some ways less embarrassing. Until Clinton came along, Democrats had held a majority in the House of Representatives for 40 years.

Today, there is a rosy glow associated with the Clinton years. We tend to forget such things as the tawdry impeachment scandal, for a simple reason: The economy grew quickly and millions of jobs were created. If you couldn't find a job in Northern California in the late '90s, you weren't breathing. The warm tint of the rearview mirror imbues Clinton with the authority to lecture us all now on how we should be doing a better job getting people back to work. But what about the responsibility that Clinton should shoulder for sowing the seeds of the financial crisis in the first place?

Clinton rightly dismisses the notion that his aggressive support of the Community Reinvestment Act was the root cause of the housing bust. We'll give him points for that. But what are we to make of the one area in which he does acknowledge making a mistake?

I do think I can be fairly criticized for not making a bigger public issue out of the need to regulate financial derivatives. I couldn't have done anything about it, because the Republican Congress was hostile to all regulations ... But I should have spoken out more, especially after Congress included a measure barring financial derivatives from being regulated as securities or commodities in an appropriations bill that passed by a veto-proof majority.

Clinton then has the gall to approvingly mention Commodity Future Trading Commission director Brooksley Born's strongly voiced opinion at the time that "financial derivatives should be subject to the same kinds of capital and transparency requirements as agricultural derivatives." He somehow fails to mention the fact that Born's push to regulate financial derivatives was cut off at the knees by Clinton's own senior economic officials, including, notably, Larry Summers and Robert Rubin. The heads of the Treasury Department, Federal Reserve and SEC released a joint statement that left no doubt as to administration policy: "We have grave concerns about this action and its possible consequences. We seriously question the scope of the CFTC’s jurisdiction in this area."

For Clinton to suggest that he would have made a bigger public issue "out of the need to regulate financial derivatives" implies that he agreed with Born -- but there is very little evidence to be found for this revisionism in the historical record. The opposite is much more true. Clinton's administration was extraordinarily accommodative of Wall Street's desires; their priorities were his priorities. One can assume that the health of the financial sector would have been just as high a priority for a Clinton administration in 2008 as it was in 1999. The banks would certainly have been bailed out, fueling popular resentment and creating identical political problems for the incumbent party.

Before Bill Clinton decided to write a book arguing the merits for smart government, he should have fessed up to how his own dumb government played a role in creating the financial crisis that put so many Americans out of work and has made it so difficult to restart economic growth.

That having been said, however, anyone looking for a smart to-do list of what government can do to spur economic growth would not be ill-served by reading Chapter 6: "How We Can Get Back in the Future Business." Clinton is a bit more supportive of the debt-reduction proposals that came out of Obama's Erskine-Bowles commission than most serious liberals will feel comfortable with, but aside from that, most Democrats will find themselves nodding their heads at his proposal to spur green job creation through investment in renewable energy, his call for a big infrastructure buildup, and his plan to fix the housing sector. Clinton's always been a wonk's wonk -- he clearly enjoys wallowing in the nitty-gritty details of policy. There's meat in "Back to Work."

If there are any militant antitax folks still reading this book, I can hear the counterattack forming in your minds: "Clinton wants European-style social democracy! He wants to tax us to death. He's for too much government! He doesn't believe in American exceptionalism! He doesn't even love America anymore, or he wouldn't be telling us all this bad stuff!

"That's all nonsense," he writes.

Well yeah, sure, except for the annoying little fact that it's nonsense that represents the expressed views of most of the Republicans currently elected to Congress. And indeed, it's mild nonsense that doesn't even come close to the intemperate nastiness of the rhetoric routinely hurled at President Obama.

It's cute for Clinton to pretend that any "militant antitax" folk would even purchase "Back to Work," much less be reading it as far as Page 111 without their heads exploding. The sad truth -- and this is something that Clinton is surely aware of -- is that all the well-meaning and pragmatically effective job creation tools in the world are worth nothing when matched up against the scorched earth tactics and extreme calcified ideology of the current Republican Party. Clinton's great 1990s nemesis, Newt Gingrich, is a moderate when compared to the GOP's Tea Party backbone -- something Gingrich learned to his shock when he had the temerity to criticize Paul Ryan's budget as "right-wing social engineering."

If you're in the market for an alternate reality, pick up "Back to Work," mix yourself a strong drink, and pretend to your heart's delight that if we just had the right wonk in office, pushing the right kind of policy proposals, unemployment would be falling while the economy boomed. But if you want to change reality, just make sure you go vote.