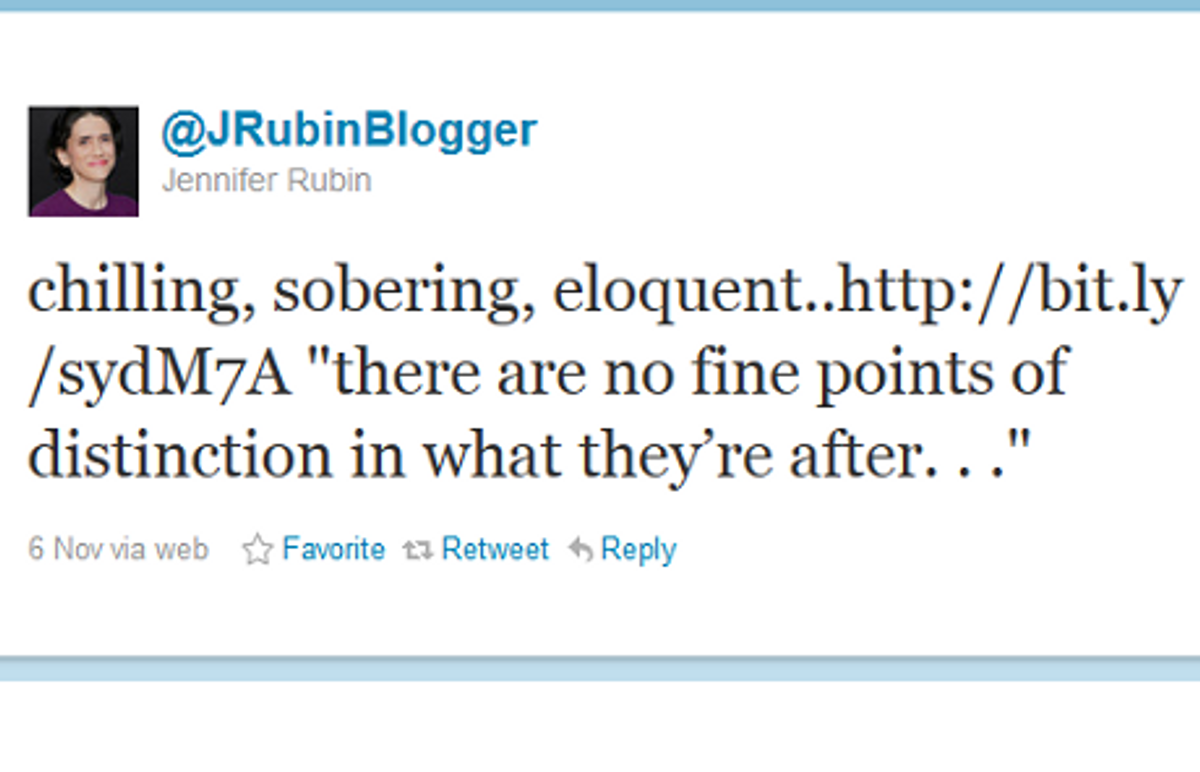 And she doesn't even know how to link properly, either (Twitter)
--

Jennifer Rubin, the Washington Post's official correspondent for passing along and endorsing the Romney campaign's anonymous criticisms of Rick Perry, recently "retweeted" a link to this blog post by Rachel Abrams, in which Adams responds to the release of Gilad Shalit by calling on Israel to commit mass murder against Palestinians in revenge. Rubin kind of got in a bit of trouble for this, except not really.

The grandiloquent post in question requests either (it's not entirely clear) that Israelis feed Shalit's captors to sharks or that they feed his captors along with women and "their offspring" to sharks. (I imagine Abrams considers nearly every Palestinian in Gaza to be complicit in Shalit's imprisonment, so this distinction may not amount to much.) Either way, the post makes liberal usage of unambiguous anti-Arab slurs ("devils' spawn," "savages," "animals") and, well, it's a call for mass slaughter.

After various people, including Max Blumenthal, said it was perhaps inappropriate for a Washington Post blogger to endorse this sort of talk, Post ombudsman Patrick Pexton took the case. Pexton concluded that the retweet was in poor taste, but for him it was more of an issue of inappropriate Twitter usage than it was of Rubin being essentially an awful person who agrees with a virulent anti-Arab bigot.

To demonstrate that she essentially agrees with Abrams' perspective, Rubin then tweeted a link to another Abrams post, calling it "chilling, sobering, eloquent." This post puts the word "Palestinians" in scare quotes and places Mahmoud Abbas in a list of "blood-worshippers."

Who is Rachel Abrams, besides a woman who writes like a teenager imitating Marty Peretz? She's another talentless hack born into neocon royalty. Abrams is the daughter of Midge Decter, and apparently inherited her mother's obsessive homophobia. Her stepfather is neoconservative founding father Norman Podhoretz, and she is married to Bush administration Middle East honcho Elliot Abrams. An intense hatred of Arabs is basically the one theme of her writings, repeated endlessly, in an infinite number of variations.

Here, for example, she tells the inspiring tale of literally screaming "Fuck you, Arabs" while driving past the Israeli West Bank barrier wall. This isn't someone making any sort of controversial political argument. This is just someone who hates, intensely, a specific ethnic group.

So, with the ombudsman having weighed in more or less on the side of it being a bad idea for Jennifer Rubin to endorse this woman, we come to editorial page editor Fred Hiatt, who had this to say:

As a general matter I think it isn't wise for me to comment on the work of the ombudsman, who is entitled to his views, and over whom I do not have editorial control.

However, I will say this: I think Jennifer is an excellent journalist and a relentless reporter. I think because she has strong views, and because she is as willing to take on her home team, as it were, as the visitors, she comes under more scrutiny than many and is often the target of unjustified criticism. I think she brings enormous value to the Post.

In Hiatt's world, "hating Arabs" is just a controversial opinion that "brings enormous value to the Post." As Blumenthal says, if Rubin had supported a blog post with the exact same tone written about black people -- or Jews! -- she'd be out of job right now. Instead, she's an "excellent journalist," according to her boss.

That's the state of the liberal media today.