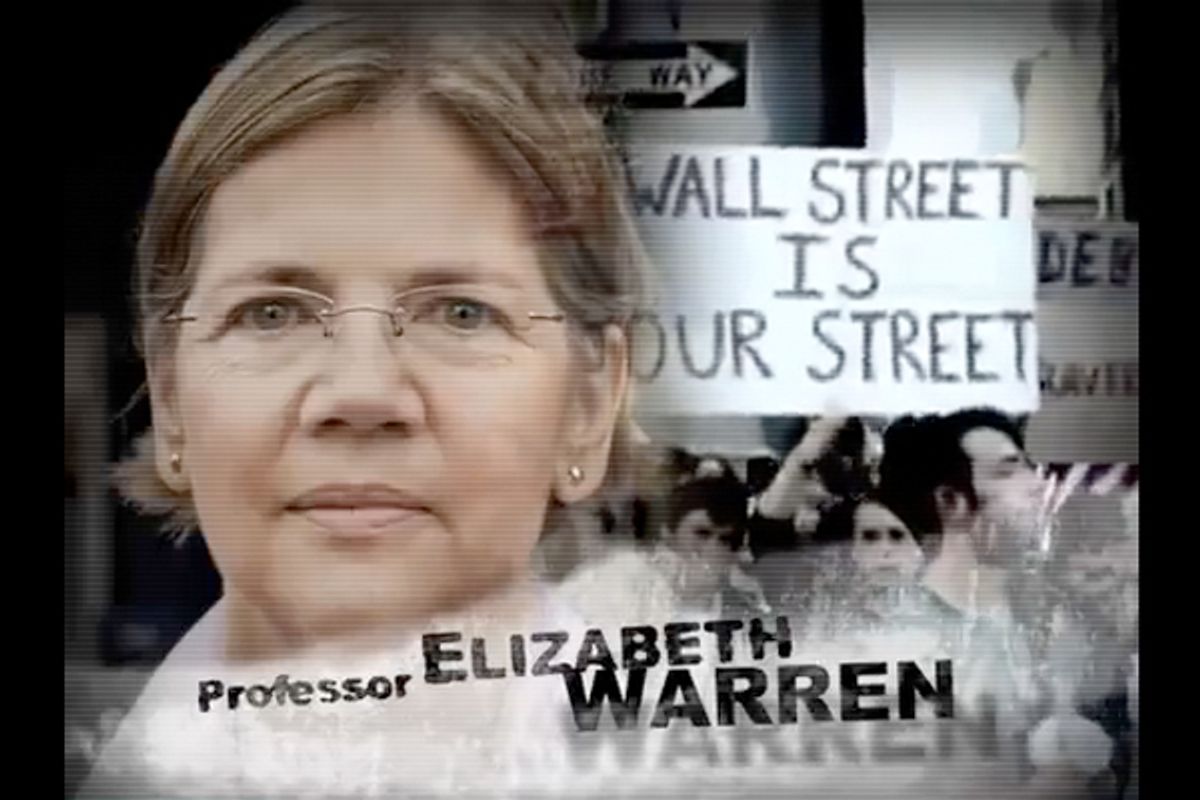 Crossroads GPS, a 501(c)(4) group co-founded by Karl Rove that raises and spends unlimited money on "independent advocacy," is using the Massachusetts airwaves to fan the culture war flames.

A new 30-second ad from the group notes that Elizabeth Warren, the Democrat who will likely challenge Sen. Scott Brown next year, has aligned herself with the Occupy Wall Street movement. Then, with menacing music and unflattering images from the protest in the background, a narrator warns that OWS is made up of “extreme left protesters” who “attack police, do drugs and trash public parks. They support radical redistribution of wealth – and violence." ("Democratic" pollster Doug Schoen even makes a cameo.) Here's the ad:

As Greg Sargent explains, the message is consistent with the national conservative movement's response to OWS, which has sought to exploit

a cultural fault line that’s been key to our politics since the 1960s. Conservatives have elevated the protesters’ outsized tactics and violence to push the cultural buttons of blue collar whites and independents — who will be central to the Massachusetts race — in an effort to distract them from the populist message embodied by the protests and Warren’s candidacy.

This is exactly right. As I've written before, the politics of Massachusetts are frequently misunderstood by national observers, who know how rare Republican victories in the state are and remember it as the only state that went for George McGovern. But while Massachusetts is an extremely Democratic state, it isn't nearly as liberal as its reputation. There are large blue-collar and working-class swaths of the state, areas filled with voters who inherited Democratic identities and who are suspicious of a national Republican Party that is dominated by Christian conservatives from the South.

Most of the time, these voters will simply affirm the Democratic slate, although they often end up electing culturally conservative candidates. (The exact number is in dispute, but antiabortion Democrats in the state Legislature are much more common than you might expect.) They are also willing to defect in high-profile statewide races -- as they did in January 2010, when Scott Brown used victories in cities like Fitchburg, Lowell and Quincy to build a 5-point win over Martha Coakley, the first time since '72 that a Republican won a Senate race in the state. There are other potential victory formulas for Republicans in Massachusetts, but Brown -- with his regular-guy-with-a-truck shtick -- is the perfect Republican emissary to the same voters that Crossroads is targeting with its new ad. So if this message continues to define Brown's attacks on Warren, his candidacy may represent the single best statewide indicator in 2012 of whether the right's culture war response to OWS succeeds.

This is doubly true because there's probably no Democratic statewide candidate in the country who is better equipped than Warren to refute the right's characterization of OWS, and to make a compelling and affirmative case for the concepts and principles behind the movement. She has already shown herself to be a persuasive communicator -- the Democrats' Chris Christie, I've argued, someone capable of explaining complicated concepts like the social contract with unusual clarity and passion.

Right now, voters seem to be sending a mixed message about OWS. The actual protests themselves may be losing favor, thanks to the right's campaign and to the recent increase in reports of violence. But the issues that the protests have forced into the political debate -- about Wall Street accountability, income inequality, and the decline of the middle class -- all play to Warren's advantage; she is where most voters are on these topics, and Brown isn't.

All of which could make the Bay State the perfect 2012 laboratory to test the power -- or lack thereof -- of right's culture war strategy on OWS.