Noel Gallagher: It's not about whiskey and heroin

The hard-partying songwriter, now on his own, laughs off the last decade of Oasis and looks to his solo future 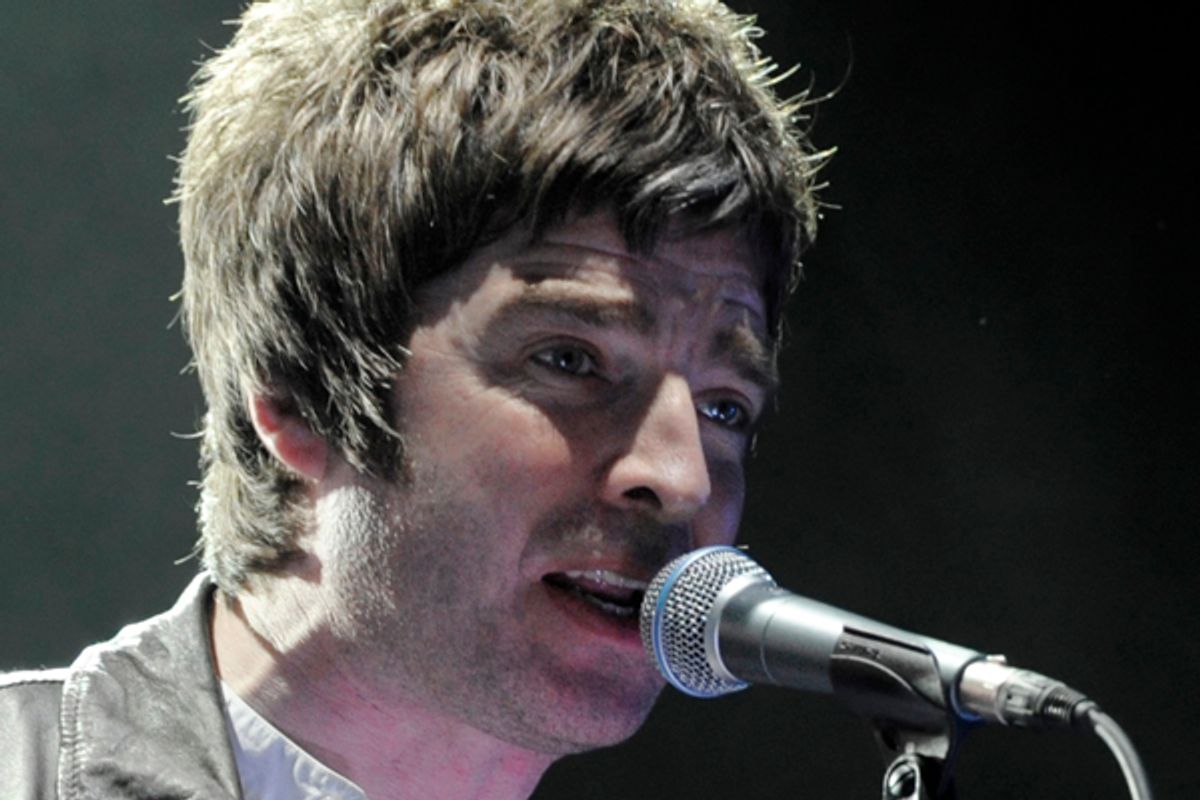 On a rooftop patio looking out over Manhattan, Noel Gallagher is clutching a glass of white wine and making small talk with people he doesn’t know. Though the booze may be flowing at the launch party for his debut solo effort, "High Flying Birds," there’s little sign of the legendary rock ‘n’ roll hedonism that fueled the early, swaggering Oasis albums. Gallagher proclaims confidence about Manchester City, the once-scrappy, now-nouveau riche football team he supports, and he admits he has sketchy recollections of growing up a few miles from its grounds: “too many drugs” in the interim.

Such substances are in the past, as is Oasis -- more or less. Lounging on a sofa at a boutique hotel on the Bowery the next day, the singer and guitarist is somewhat subdued. He looks lean and fighting fit, but he’s still getting the hang of a solo career that began, effectively, in August 2009, when he quit Oasis after a bust-up with his brother Liam, the band’s lead singer.

The rooftop party, he says, made him slightly uncomfortable. “It’s quite strange on your own. … The focus is on you. It would have been nice to have been in a band last night.” In his Oasis days, he was happy at the side of the stage – in control, as the primary songwriter, but out of the spotlight. Does he still feel this way?

“Oh yeah. I’d much rather be in a band,” he says, then stops short. “Let me rephrase that. Initially, when I started this, I was like: ‘This is a fucking pain in the arse; I don’t need this at my age’” – Gallagher is 44 – “being a frontman. And I might eventually grow into it. Each time I rehearse, I find it easier. I’m inching forward day by day.”

It’s odd to hear such introspection from someone so infamously mouthy, especially when the stomping tunes on "High Flying Birds" find Gallagher singing about riding a tiger and shooting a hole into the sun. The album, helmed by latter-day Oasis producer Dave Sardy and beefed out with a string section and a choir, sounds huge.

Its overriding theme, Gallagher says, is “escapism and the longing to be somewhere else. And then when you get there, is the grass really greener on the other side?”

Gallagher admits that he wrote the opener, “Everybody’s on the Run,” “toward the end of the band breaking up.” And although he doesn’t figure that’s what the song is about, he admits, “Who knows? Subconsciously that might have been in there when the words came.”

Not that he’s keen to speak of such things. Asked about the lawsuit for defamation launched against him by Liam this summer (and dropped shortly thereafter), he chuckles – “I don’t want to get sued again” – before admitting that the situation, to him, “was all a bit mad. I don’t take those things quite seriously. Somebody called me, explained what was going on, and I was like, ‘Really? Fuckin’ 'ell.’ But whatever. We move on. That was last week. It’s something else next week.”

For years, he has been fond of telling interviewers that his brother has no sense of humor. Noel clearly does, but people don’t always get it. “Every fucking day, I do an interview, and I have a certain turn of phrase and way with words and semantics – somebody’s always taking offense to what I say. … I make a flippant comment about whatever, and all hell breaks loose. It’s just the thin ice I walk on.”

For all his protests, Gallagher clearly enjoys the interview process, and as he warms up, he holds forth about poetry books (“People buy me them for Christmas, because it’s nice to just throw open a page, read somebody’s words, and go, 'Fucking 'ell, it’s amazing’”), modern music (“The Arctic Monkeys and Kasabian – it’s strange to think that they’re the only two real new bands that are worth anything”) and the “cinematic” images on "High Flying Birds" (“I don’t know why it’s happened this time. Maybe it’s because I haven’t wrote [the lyrics] down and I am visualizing something. Maybe it’s just ‘cause I’m a fucking genius”).

He makes the last comment with the hint of a smile, but here, it would appear he’s not entirely kidding. Being a solo act has its advantages: Not only does he not have to work with Liam, but also, he can write all the songs. On later Oasis efforts, Gallagher loosened the reins, sometimes to unfortunate effect. “If you’ve got four songwriters, trying to make something that’s concise and has a direction is very difficult. For every 'Don’t Believe the Truth' [2005], there was a 'Heathen Chemistry' [2002].” As for "High Flying Birds"? “This is the best album I’ve written. Not ever … but for well over a decade.”

Now that he’s on a conversational roll, it’s easy to forget that scant minutes ago, he was lamenting his lack of experience as a lead singer and wondering if people would enjoy his shows. The only person who can convince Noel Gallagher that he’ll be reborn as a solo rock star, it seems, is Noel Gallagher himself.

“I came from nothing,” he says. “I taught myself to play the guitar. I’ve been in one of the biggest bands of all time, wrote some of the greatest songs … Rock ’n’ roll to me is all about freedom of thought and to be whatever you want to be. It’s not about black leather jackets and fucking Jack Daniel's and heroin. It’s just about being yourself. D’you know what I mean?”