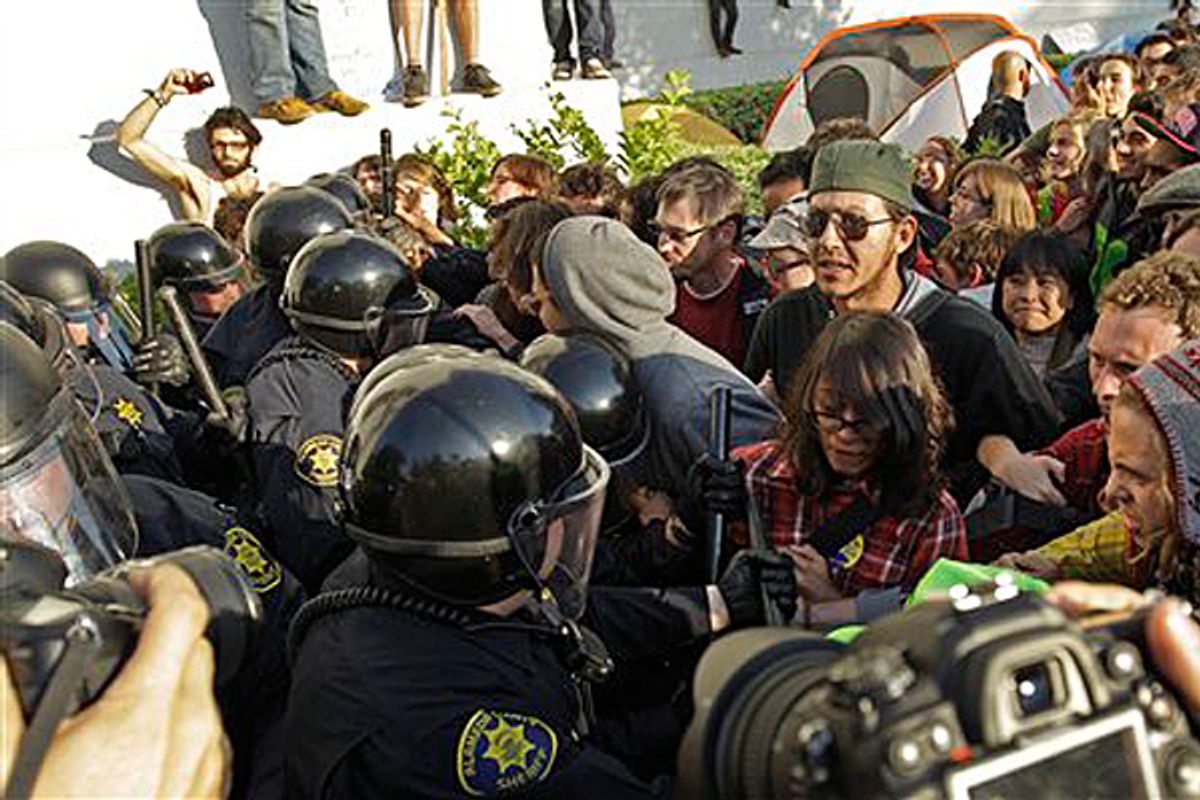 Police in riot gear clash with student activists in front of Sproul Hall on the University of California at Berkeley campus Wednesday, Nov. 9, 2011, in Berkeley, Calif. (AP/Ben Margot)
--

This video taken Wednesday on the campus of the University of California at Berkeley shows some of the most extreme incidents of police violence during the Occupy movement:

The affiliation of the officers in this video is not entirely clear (I've asked the man who shot it for more details and will update if I hear back). We do know that both campus police and Alameda County sheriffs were involved in the effort to evict Occupy protesters from Berkeley's campus yesterday.

"The police will always assess the situation and do what they feel is appropriate and safe," UC Berkeley spokeswoman Janet Gilmore told a local ABC affiliate last night. "Obviously we would like to end this as peacefully as possible, with a minimal number of arrests. But, you know, you have to respond to the situation that's presented to you."

I've asked the school for comment about the video and I'll update this post if I hear back.

UPDATE: Based on the uniforms of the police in the video, they appear to be Alameda County sheriffs. I've asked the Alameda sheriff's spokesman for comment and will update this post if I hear back. Also worth noting: Alameda sheriffs were involved in some of the violence in Oakland, possibly including the injuring of Iraq war vet Scott Olsen.

UPDATE II 11 a.m. ET: In an interview just now, Alameda County Sheriff's Office spokesman J.D. Nelson said that the officers in the video are actually members of the UC Berkeley police department, not sheriff's deputies. He pointed to the fact that the officers with the batons appear to be wearing patches in the shape worn by the UC Berkeley police. Near the end of the video, around the 1:20 mark on the bottom left of the frame, a few Alameda sheriff's deputies' patches are visible, but not by police involved in the violence.

UPDATE III 4:50 p.m. ET: Captain Margo Bennett of the UC Berkeley police tells Salon the department has no comment on the beating video.

"Any time there is an operation or event that occurs on campus, we always do an operational review. We will certainly review the activities of the night," Bennett says. "What we're focused on is maintaining the no-encampment policy that is on campus."

The university's office of public affairs has not responded to a request for comment about the video.