The end of cheap Chinese labor

As wages go up and manufacturing slows, the era of inexpensive consumer goods draws to a close 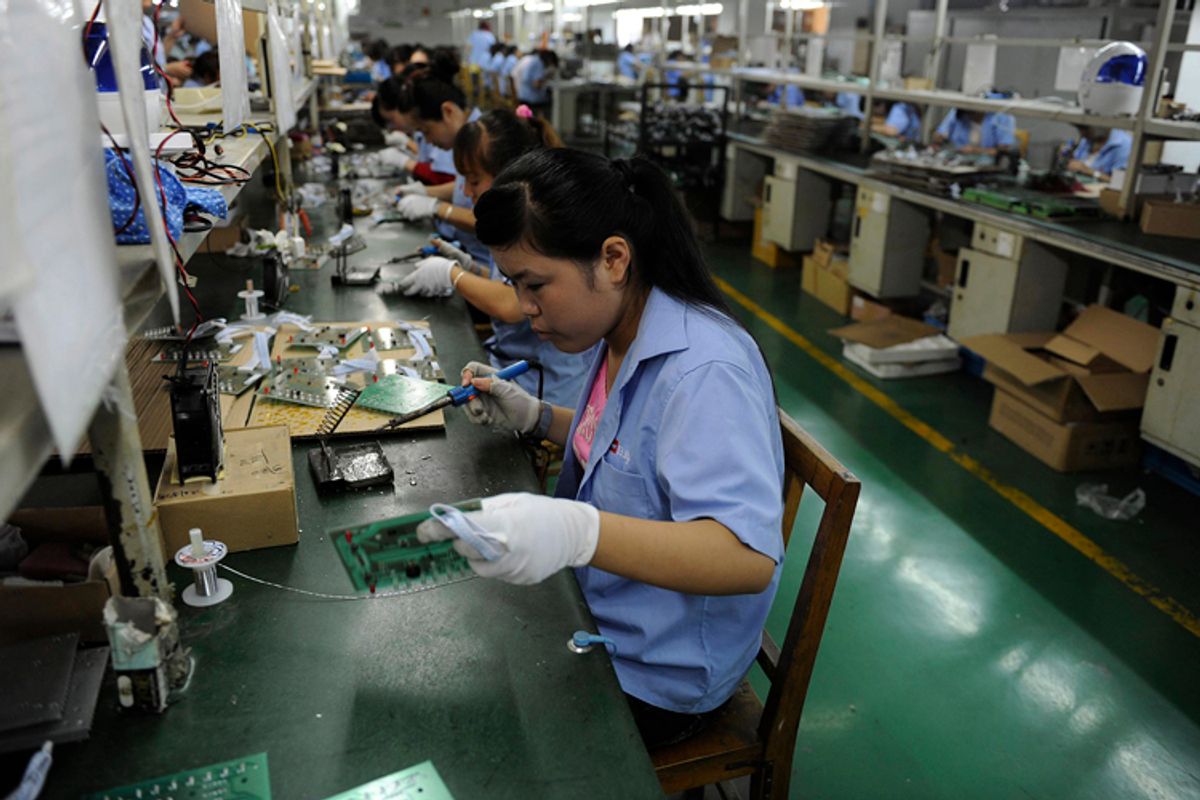 BEIJING, China — Factories in China’s manufacturing heartland are feeling the squeeze again, with minimum wages in Guangdong province set to rise by as much as 20 percent on Jan. 1 for the second time in less than a year.

And while one Chinese province’s minimum wage might seem like a local issue, the salary question underlines a continuing momentum in China toward building higher-end business and better jobs.

In other words, the days of endless, cheap Chinese labor are limited. What that means for consumers in the United States and elsewhere is simple: Things are going to cost more, soon.

“I think there’s quite a good argument now that the global race to the bottom has been concluded,” said Geoffrey Crothall of the China Labour Bulletin, a Hong Kong-based labor-rights group. “There’s nowhere else to go.”

The Pearl River Delta is no longer a cheap place to produce, but it does have established supply chains, factories and infrastructure. Companies that want to produce ultra-low-cost products are moving inland in China, or to poorer countries like Bangladesh and Cambodia. Yet there’s nothing on the horizon to replace the cheap China model of the 1990s and 2000s.

“You might find cheaper workers outside of China, but you’ll never find the scale of labor force that you can find in China,” Crothall said.

New data has showed a significant slowdown in manufacturing in China.

Analysts have warned that the trend will continue, which could be worrisome for government officials concerned with keeping up employment numbers. Still, China remains intent on producing goods higher up the value chain and is forcing the issue.

In Guangdong, where thousands of smaller factories have been driven out of business in recent years by higher costs, factory owners are protesting the newest planned mandatory wage hike. Yet labor groups say the move is necessary for workers to keep up with fast-paced inflation and move toward the government’s ultimate goal – transitioning away from low-end manufacturing.

Factory bosses say they understand the government’s desire to move toward higher-end production, but it can’t be forced, overnight. Several manufacturing associations based in Hong Kong have protested this latest wage rise to the Guangdong government, saying it’s too much, too fast.

“You need resources,” he said. “I cannot just do factory upgrading through talking.”

Meanwhile, small business owners in the Pearl River Delta say rising costs, and not just for paying wages, are pushing them to the brink.

“What else can we do? We have to play by the new rules,” Wu Keshu of the Hongtai Ceramics factory in Chaozhou said in a telephone interview. “We have no innovative ways to react.”

“We just have to adapt to this eventually by raising prices,” said Wu. “We are seeing some decrease in business but not much.”

For decades, Guangdong province and China’s Pearl River Delta have been at the heart of China’s economic rise. And while larger manufacturers and state-owned companies have contributed greatly to the boom, smaller and medium-sized private firms have also helped propel China to become the world’s second-largest economy.

As wages, raw material costs and other costs rise, those smaller businesses say they’re being cut out of the mix.

Lau said at the current rate, he expects 30 percent of factories in Guangdong to reduce production or close down this year, in the wake of a minimum wage increase last year. Another 18-20 percent pay rise would decimate the industry.

But Crothall is less than sympathetic, noting that although China’s inflation rate has slowed somewhat, China’s workers still need more to get by.

“I think for this kind of labor-intensive export-oriented small- and medium-sized enterprises, their time is on the wane in Guangdong,” said Crothall. “It’s going to be a process of survival of the fittest there.”