He provides what may be the most painful, cringe-inducing slip-up in debate history 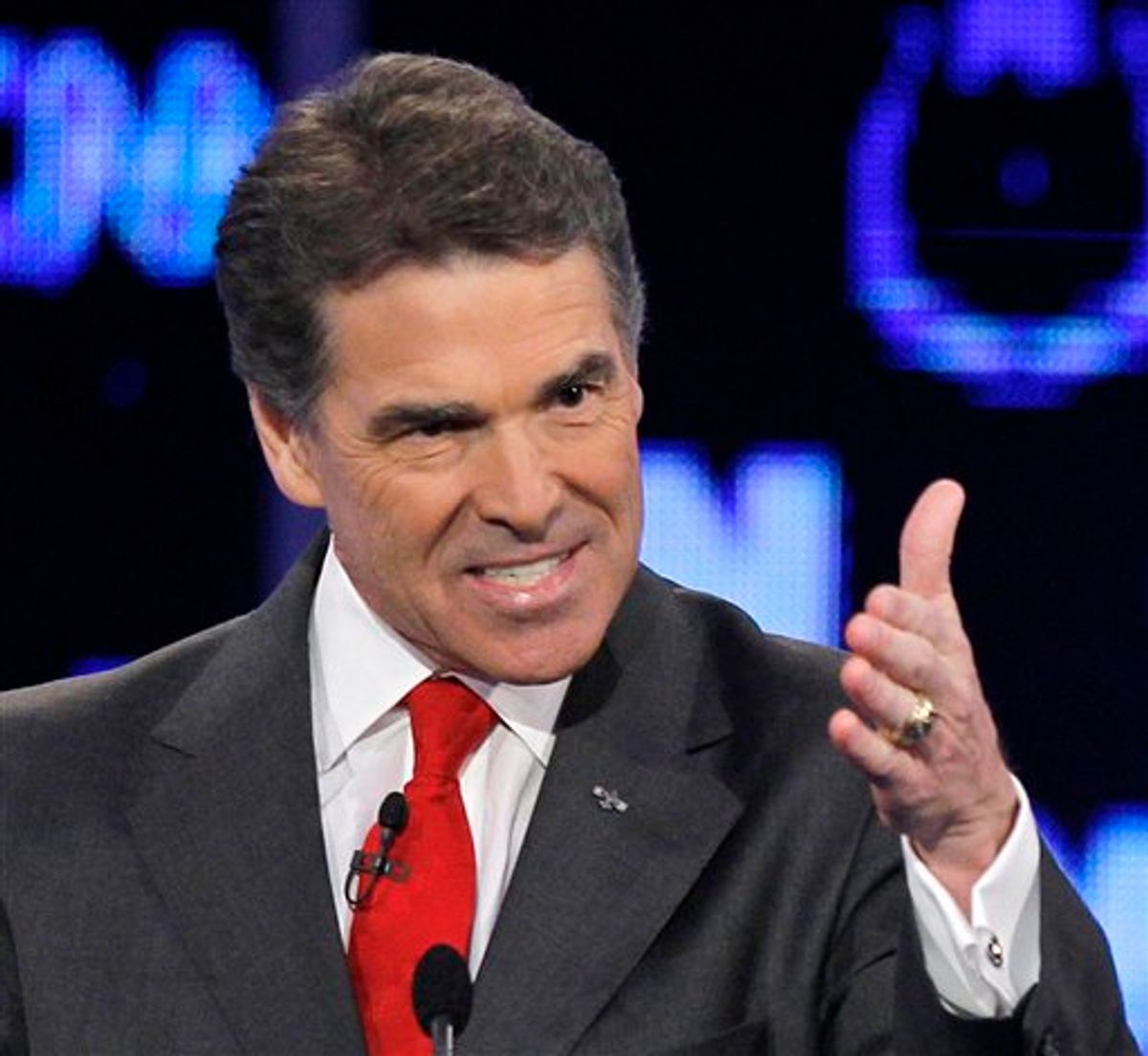 The good news for Rick Perry is that everyone will probably stop talking about his bizarre New Hampshire speech now. The bad news is: He created an even more cringe-inducing YouTube moment at Wednesday night's Republican presidential debate -- one that probably represents the most embarrassing public slip-up in what has been a campaign full of them for Perry.

Video is posted below, but we'll stick to the transcript up here and pick things up mid-answer, a little more than an hour into the debate, when Perry -- who had been mostly ignored by the moderators and his fellow candidates -- tried to win some attention by talking about which Cabinet departments he'd eliminate as president:

PERRY: And I will tell you, it’s three agencies of government when I get there that are gone – Commerce, Education, and, the, uh, what’s the third one there? Let’s see...

DEBATE QUESTIONER JOHN HARWOOD: Seriously? Is EPA the one you're talking about?

PERRY: No sir, No sir. We were talking about the agencies of government – EPA needs to be rebuilt, there’s no doubt about that...

HARWOOD: But you can’t name the third one?

PERRY: The third agency of government I would, I would do away with – Education, the uh, Commerce, and let’s see – I can’t, the third one. The third one there. Oops.

Apparently, Perry's Intrade value -- which wasn't that high to begin with, thanks in large part to all of the poor debate performances that preceded this -- cratered in the few minutes after this exchange. This really has the potential to be the flub that will define all of Perry's flubs.

Previously, his worst debate moment came at the end of September, when he launched a thoroughly awkward and incoherent attack on Romney for flip-flopping. It was after that debate that many opinion-shaping conservative commentators seemed to turn on Perry, who had entered the race as the conservative base's supposed white knight -- at last a credible true believer to save the party from Romney and his chameleon conservatism. By October, Perry had fallen to third place (or even fourth) in GOP polling, eclipsed by Herman Cain, and embarked on what amounted to a campaign relaunch, complete with promises of stronger, sharper public performances.

Since then, though, things have only gotten worse. In the most recent debate before this, he faded into the background. Then came the New Hampshire debacle. And now this. When the debate ended, the host of CNBC's wrap-up show called it a disastrous moment that will be replayed for years to come. He asked his guest, Larry Kudlow, if it's a candidacy-killer for Perry.

"I'm afraid it is," Kudlow replied, calling it "a devastating gaffe."

Later, Michele Bachmann appeared and said that she and the rest of the GOP candidates all feel sorry for Perry. That's what it's come to for the Texan: Three months after jumping into the GOP race and surging to a commanding lead, he's now being pitied by Michele Bachmann. The real suspense around Perry now may simply be whether he bothers to stick around until Iowa.

Here's the video, courtesy of TPM:

Update: The transcript has been changed to show that it was Mitt Romney -- and not Ron Paul -- who actually suggested the EPA to Perry. (h/t reader DR) Also, it's probably worth noting that Perry, in an answer to a separate question more than ten minutes later, said that the Energy Department was the third "agency" he was grasping for.