The NRA guns for Holder 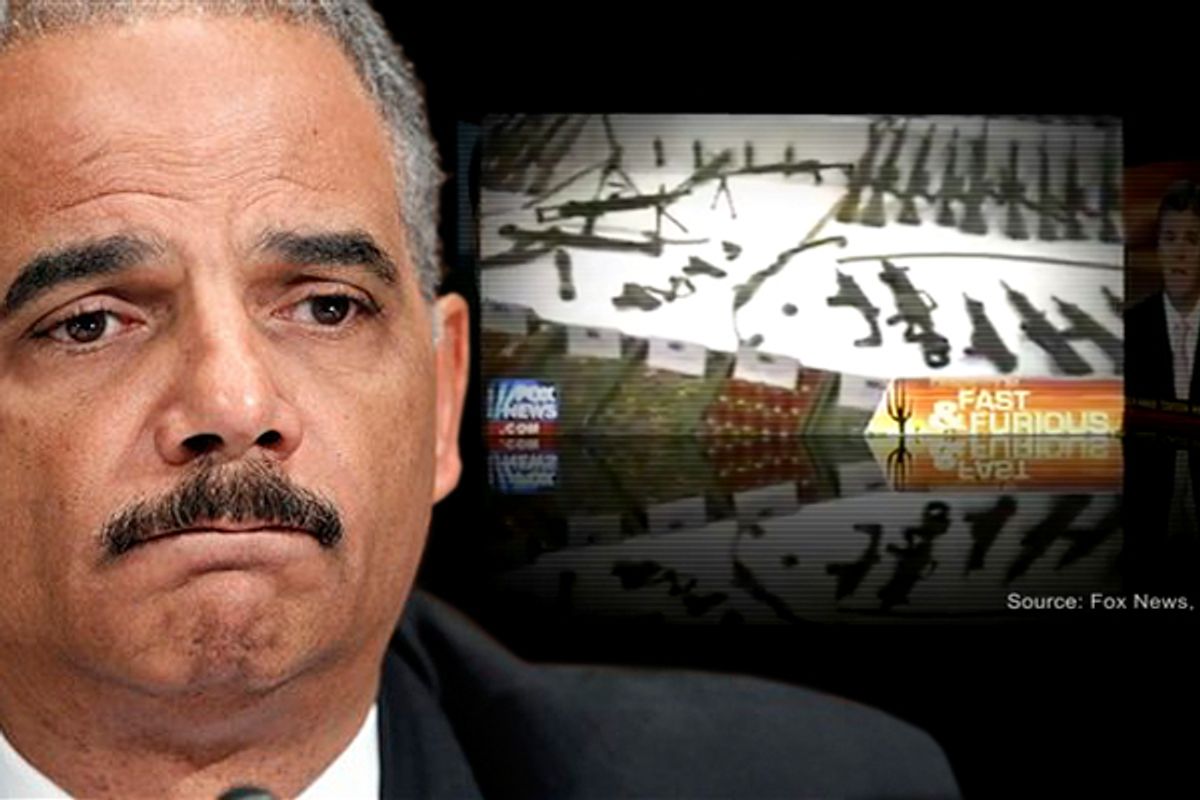 While an apologetic Attorney General Eric Holder Jr. went before a Senate committee this week to talk about a failed gun-walking program, the National Rifle Association was gearing up its campaign to get Holder fired.

In a new, slick 1 minute and 55 second television ad flush with with Fox News footage, the NRA expressed outrage over the Bureau of Alcohol, Tobacco and Firearm's gun-running operation known as Operation Fast and Furious. Under the supervision of ATF officials, the operation let guns get into the hands of criminals on both sides of the Mexican border. The NRA claimed Holder perjured himself before Congress and lied about what he knew about the operation and urged the White House to fire Holder. Holder has adamantly denied lying.

The NRA has homed in on Operation Fast and Furious in order to advance its agenda of undermining not just Holder but the president. The misguided operation, run by ATF officials reporting to the Justice Department, encouraged Arizona gun dealers to sell weapons to "straw purchasers," with the hopes of tracing the weapons to the Mexican cartels. ATF lost track of many of the guns, and some surfaced at crime scenes on both sides of the Mexican border, including one involving the murder of Border Patrol agent Brian Terry last year in Arizona.

Bent on getting this latest ad circulated, the NRA is soliciting funds to air it, and has posted this on the website:

“Watch the video and see how Eric Holder’s lies are destroying freedom and costing lives. Please make a donation to help NRA-ILA air this video across America. And please, forward this video to family and friends!”

The group's  outrage over guns getting into the hands of the bad guys under Fast and Furious would be slightly more plausible if the NRA ever expressed any concern about U.S. gun laws that effectively armed the Mexican drug cartels with heavy weaponry.

The NRA's critics note that the powerful gun lobby, based in northern Virginia, has essentially accomplished the same evil as Fast and Furious by lobbying hard -- and taking legal action if necessary -- to water down tough U.S. gun laws and regulations. The NRA is particularly determined to undermine its nemesis, the Bureau of Alcohol, Tobacco, Firearms and Explosives, which enforces gun laws.

The NRA has adamantly fought ATF regulations that require gun dealers in four Southwest border states to report sales of two or more assault weapons to one person within five days. The NRA also helped derail the confirmation of  Obama nominee Andrew Traver for director of ATF, which has been in dire need of stability. The NRA opposes strict handgun control laws in such cities as Washington that have high rates of gun violence.

"I think the NRA has to have something to scare their members about and attacking Obama and more specifically Holder is part of that plan,"said Kristen Rand, legislative director for the Violence Policy Center in Washington.

Rand says the NRA has conveniently homed in on the guns in Operation Fast and Furious, while ignoring "the hundreds of thousands of other guns that have flooded Mexico and killed tens of thousand of Mexicans."  And she noted that the  NRA has been mum about news in recent days that  a similar ATF gun-walking operation -- Operation Wide Receiver -- was pursued under the Bush administration and Attorney General Mike Mukasey.

"They're not upset about that," she said.  "They're directly threatened by another Holder-Obama administration," and using it to help fundraise.

Few contest the downside of Operation Fast and Furious.

"This operation was flawed in concept, as well as in execution," Holder told the Senate Judiciary Committee on Tuesday. "And, unfortunately, we will feel its effects for years to come as guns that were lost during this operation continue to show up at crime scenes both here and in Mexico. This should never have happened. And it must never happen again. "

"The American public needs to know the whole truth on this," said NRA president Wayne LaPierre  in a video last June. "The fact is, that brings us to the consequences, these guns are now, as a result of what they did, in the hands of evil people and evil people are committing murders and crimes with these guns against innocent citizens."

The whole truth is that lax U.S. gun laws -- supported by the NRA -- are what have helped the Mexican drug cartels to arm themselves and slaughter law enforcement officers, rivals and innocent people.

"The NRA has been devoted to assure that our gun laws remain anemic, " said Dennis Henigan, acting president of the Brady Campaign to Prevent Gun Violence.  "The NRA is not really interested in stopping the gun trafficking."