A passionless presidential race in 2012?

Americans are angry and polarized, but neither Obama nor Romney looks likely to inspire much enthusiasm 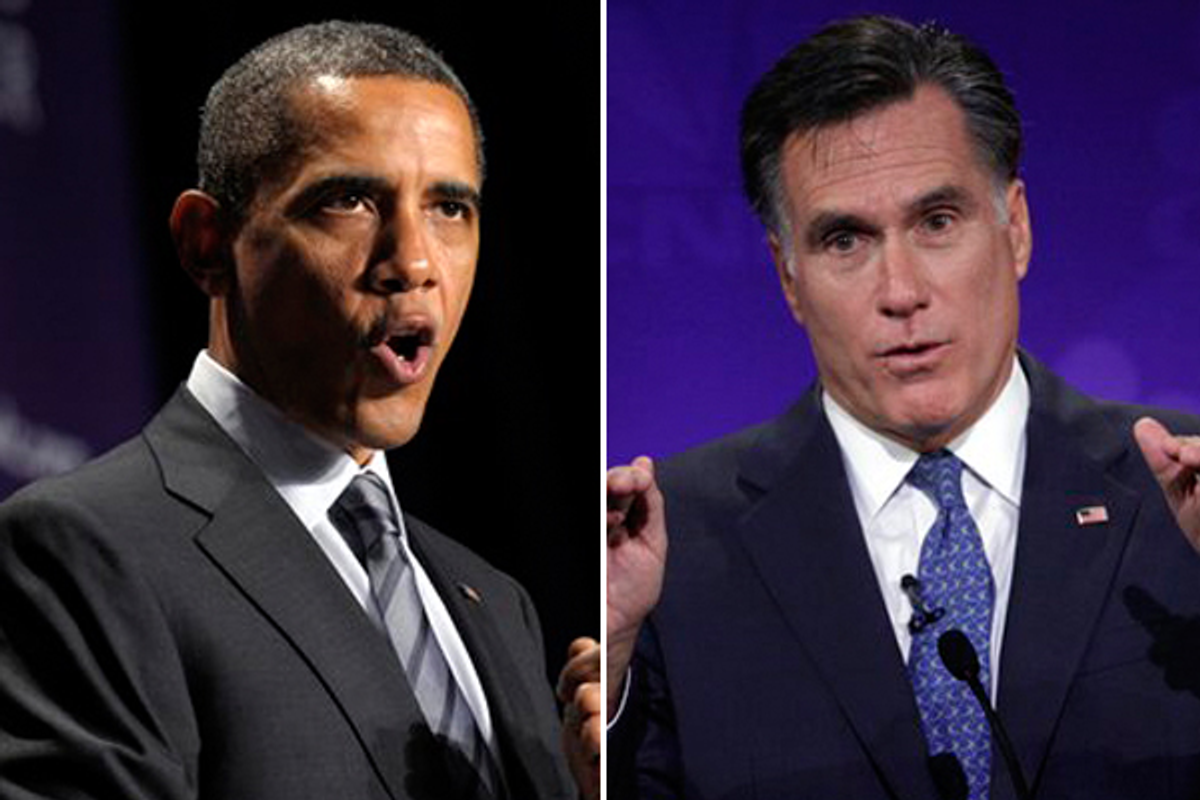 Polls show Americans angrier and more polarized than at any time since the Vietnam War. That’s not surprising. We have the worst economy since the Great Recession and the worst politics in living memory. The rise of the regressive right over the last three decades has finally spurred a progressive reaction. Occupiers and others have had enough.

Yet paradoxically the presidential race that officially begins a few months from now is likely to be as passionless as they come.

President Obama will be supported by progressives and the Democratic base, but without enthusiasm. His notorious caves to Republicans and Wall Street — failing to put conditions on the Street’s bailout (such as demanding the Street help stranded home owners), or to resurrect Glass-Steagall, or include a public option in health care, or assert his constitutional responsibility to raise the debt limit, or protect Medicare and Social Security, or push for cap-and-trade, or close Guantanamo, or, in general, confront the regressive Republican nay-sayers and do-nothings with toughness rather than begin negotiations by giving them much of what they want — are not the stuff that stirs a passionate following.

Mitt Romney will surely be the Republican presidential candidate — and Romney inspires as little enthusiasm among Republicans as Obama does among Democrats. The GOP will support Romney because, frankly, he’s the only major Republican primary candidate who does not appear to the broader public to be nuts.

But Republicans don’t like Romney. His glib, self-serving, say-whatever-it-takes-to-win-the primaries approach strikes almost everyone as contrived and cynical. Moreover, Romney is the establishment personified — a pump-and-dump takeover financier, for crying out loud — at the very time the GOP (and much of the rest of the country) are becoming more anti-establishment by the day.

At this point neither the Republican right nor the mainstream media wants to admit the yawn-inducing truth that Mitt will be the GOP’s candidate. The right doesn’t want to admit it because it will be seen as a repudiation of the Tea Party. The media doesn’t want to because they’d prefer to sell newspapers and attract eyeballs.

The media are keeping the story of Rick Perry’s cringe-inducing implosion going for the same reason they’re keeping the story of Herman Cain’s equally painful decline going — because the public is forever fascinated by the gruesome sight of dying candidacies. With Bachmann, Perry and Cain gone or disintegrating, the right wing-nuts of the GOP have only one hope left: Newt Gingrich. His star will rise briefly before he, too, is pilloried for the bizarre things he’s uttered in the past and for his equally bizarre private life. His fall will be equally sudden (although I don’t think Gingrich is capable of embarrassment).

And so we’ll be left with two presidential candidates who don’t inspire — at the very time in American history when Americans crave inspiration.

Instead of a big debate about the basics (how to truly restore jobs and wages, financial capitalism versus product capitalism, the place and role of America in the world, how to rescue our democracy), we’re likely to have a superficial debate over symbols (the budget deficit, the size of government, whether we need a “businessman” at the helm).

This means political passions are likely to move elsewhere — finding their voices in grass-roots movements, social media, demonstrations, boycotts, and meet-ups — on the Main Streets and in the backwaters, and only episodically in the mainstream media or in normal election-year events.

In some ways this may not be such a bad thing. The regressive right has had thirty years to build itself into a political power. Newly-energized progressives (Occupiers and others) need enough time to develop concrete proposals and strategies. What’s the rush? If polls are to be believed, most of the nation is progressive, not regressive (witness last Tuesday’s results in Wisconsin and elsewhere). So it is, after all, only a matter of time.

Yet viewed another way, a passionless presidential race may be dangerous for America. The nation’s problems may not wait. They require bold action, and soon.