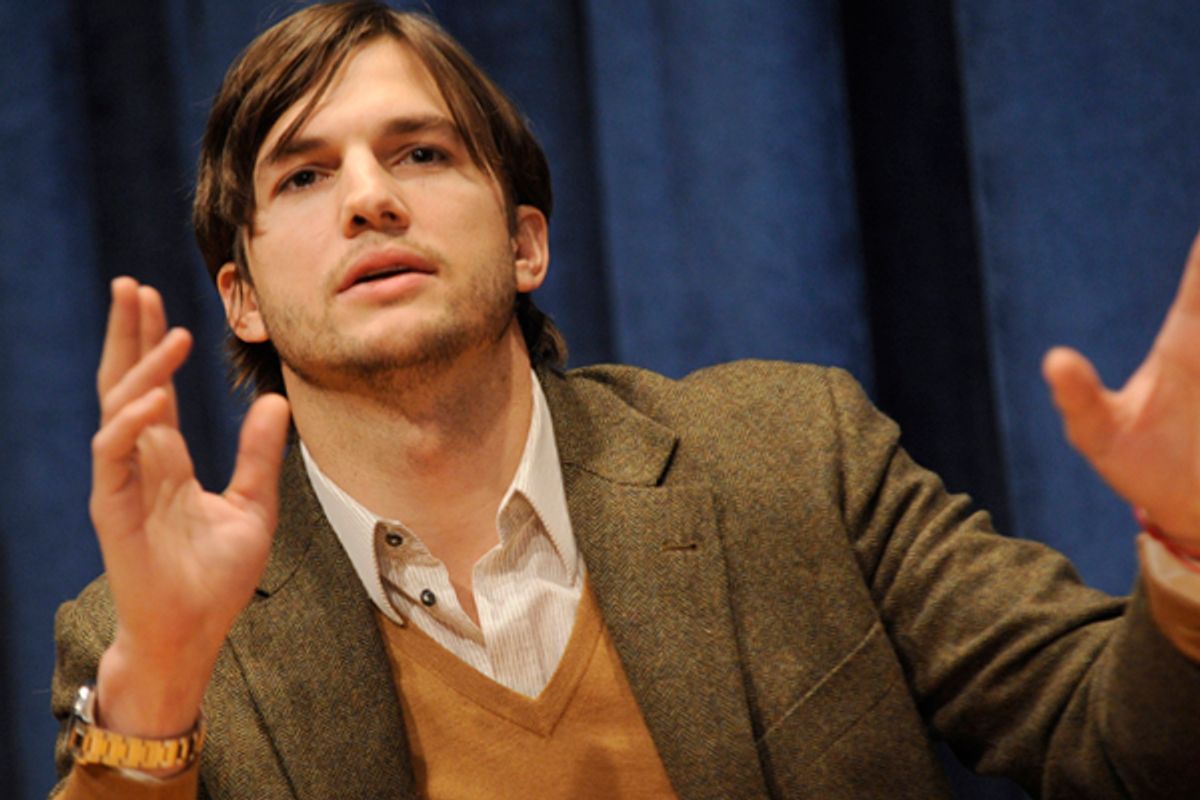 It's really not Ashton Kutcher's month. First, the actor best known for playing lunkheaded stoners found himself embroiled in tawdry accusations of an unprotected extramarital boots knocking with a 22-year-old blonde. Then on Wednesday evening, he committed epic tweet fail by tossing off an outraged response to the dismissal of embattled Penn State coach Joe Paterno. "How do you fire Jo Pa?" he wrote. "#insult #noclass as a hawkeye fan I find it in poor taste."

As headlines across the world have made clear, the legendary 84-year-old was not ousted this week because of his age or his job performance. Instead, he was fired for his lackadaisical response to charges that former assistant coach Jerry Sandusky allegedly sexually abused a young boy in a campus locker room. Though Paterno related the alleged incident to his superiors, he did not report any wrongdoing to the police. On Saturday, Sandusky was charged with multiple counts of sex abuse involving eight boys over the course of several years.

You'd think Kutcher, who has his own anti-child sex trafficking foundation, would keep himself more abreast of the major child abuse scandals – especially those that allegedly involve that trafficking of human chattel. Apparently he didn't get the memo. He was, however, promptly schooled on the details of Paterno's departure by plenty of his horrified followers, who were swift to brand him, among other things, an "idiot."

So what did the undisputed Twitter all-star, a guy who's historically shown a keen knack for the social, soundbite-friendly media -- with over eight million followers to show for it -- do next? Initially, he seemed to be handling it with the right touch of humility and grace. He tweeted that "As an advocate in the fight against child sexual exploitation, I could not be more remorseful for all involved in the Penn St. case" and that "As of immediately I will stop tweeting until I find a way to properly manage this feed. I feel awful about this error. Won't happen again." He even threw in a self-deprecating picture of himself standing next an "I'm with stupid" sign. Ah, was it just last spring that Kutcher boasted that he "only played stupid on TV"?

He followed up with a blog post admitting that "I assumed that [Paterno] had been fired due to poor performance as an aging coach" and hastily posted a tweet defending his career." After the "hailstorm" of "outrage" he quickly deleted the offending post, and now says he's "truly sorry." That's exactly what someone should do when he makes a huge mistake. He should say simply that he was wrong, stupid even, and apologize. But here's what he shouldn't do: wuss out. And that is exactly what Ashton Kutcher did.

Kutcher went on to write that he's "going to take action to ensure that it doesn't happen again," explaining "While I feel that running this feed myself gives me a closer relationship to my friends and fans I've come to realize that it has grown into more than a fun tool to communicate with people. While I will continue to express myself through @Aplusk, I'm going to turn the management of the feed over to my team at Katalyst as a secondary editorial measure, to ensure the quality of its content."

Kutcher explains now that "I have posted virtually every one of my tweets on my own, but clearly the platform has become too big to be managed by a single individual." Really, dude? You have power and reach enough to use your Twitter celebrity to raise funds to fight malaria and you can't handle your own "platform"? A "platform" largely devoted to people telling each other what bar they're sitting in at any given moment? That is so effing weak.

It's good that Kutcher has acknowledged he made a terrible mistake. He should muzzle himself for a while. And yes, Twitter is a social minefield, as a lengthy list of individuals will attest. Cee Lo Green learned the power of social media after snippily suggesting a critic who didn't enjoy his show must be gay. Gilbert Gottfried learned it when he rushed in with Japanese tsunami jokes back in March – and lost his gig as the Aflac duck. Nir Rosen resigned from his post at NYU last winter after "rolling my eyes" over Lara Logan's rape in Egypt. And the likes of Courtney Love and Lindsay Lohan make every day on the Internet a fresh opportunity to put a virtual foot in a metaphoric mouth.

But you know what you do when you screw up? You grow a pair, say sorry and move on, in your own words. You don't farm out your mea culpas, wry observations or announcements of when you're next doing Jimmy Fallon's show for editorial review. You don't run your words past your handlers, lest you commit the human crime of making a mistake about how you're at the "Two and a Half Men" table read. That's pretty pathetic, especially from the man who just two weeks ago tweeted glowingly about the "willingness to fail."

The erratic, sometimes contentious world of Twitter is not for everybody. If you don't want to be in it, don't. But remember that Joe Paterno lost his job for being too much a coward to speak up. There are far worse things in the world than saying something stupid. Everybody says stupid things sometimes. We don't then contract someone who will be less stupid to speak for us. We learn from our mistakes and we keep on talking, in our own sometimes clumsy ways. Otherwise, we're not communicating at all. Kutcher's feed is now just a mouthpiece posting announcements. And if that's all it is, what's the incentive for eight million people to care?