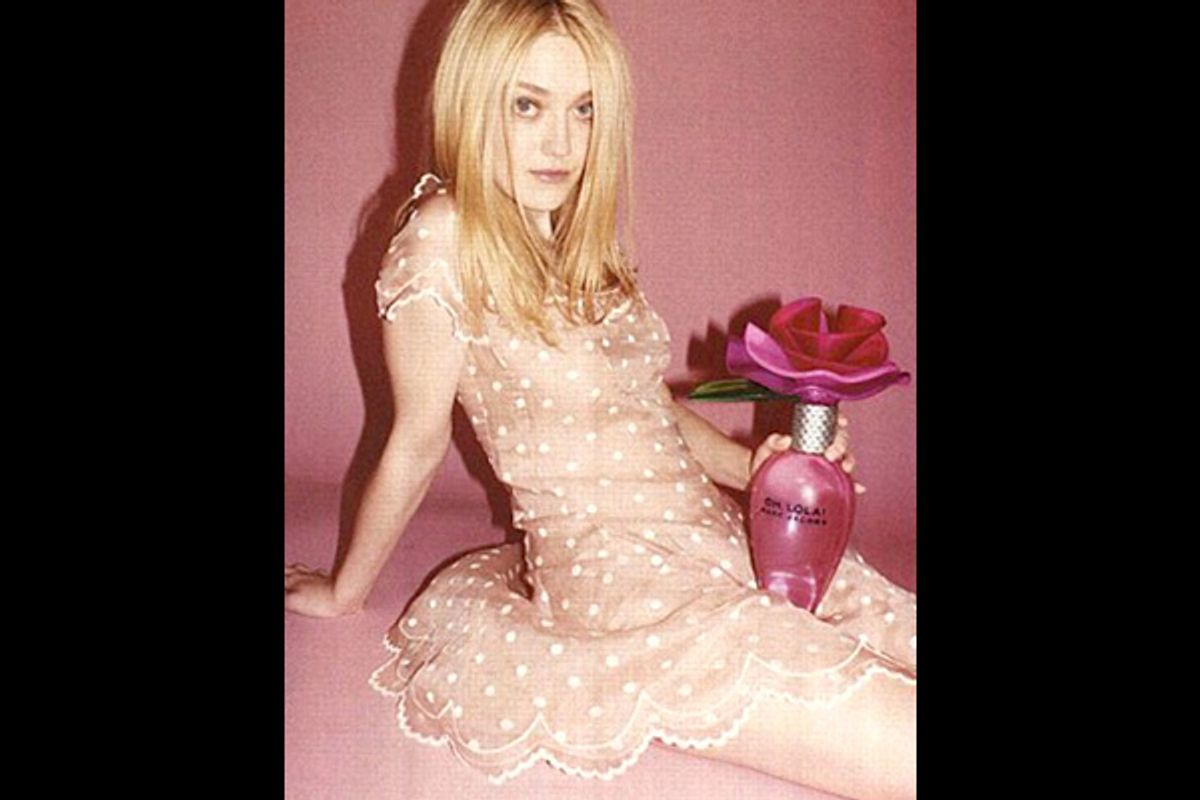 She wears a wise-beyond-her-years look and a demure -- yet unmistakably short -- polka-dotted dress. A bottle of pink perfume bearing the Nabokovian label "Oh Lola!" -- and topped with a red flower that wouldn't be out of place in a Georgia O'Keeffe painting -- rests squarely between her legs. There's nothing about the image of the 17-year-old that's revealing or overtly sexual. And that's exactly what got it into trouble.

Within that restrained, downright doll-like photo of actress Dakota Fanning are all the clues to what caused the U.K. to ban Marc Jacobs new ad. Maybe if it wasn't so innocent looking, it wouldn't be quite so controversial. The British Advertising Standards Authority pulled the campaign this week after deeming that it depicted Fanning in a "sexualised manner." The ad was yanked after the ASA received complaints – a whopping four of them – from readers who'd taken offense at the image.

It may sound ridiculous to bring down an entire ad campaign on the strength of four complainers. Yet it's hard to imagine that the image of a coy and childlike Fanning clutching a bottle of Humbert Humbert catnip wasn't cynically dreamed up precisely to get attention. Coty U.K., which manufacturers the perfume, calls the image "provoking, but not indecent," and explains that the campaign was aimed at magazine readers over the age 25. Yeah, that's why it's creepy. What person over 25 wants a perfume that looks like the official fragrance of deflowering?

As the ASA elaborated, "We considered that the length of her dress, her leg and position of the perfume bottle drew attention to her sexuality. Because of that, along with her appearance, we considered the ad could be seen to sexualise a child. We therefore concluded that the ad was irresponsible and was likely to cause serious offence." Likely to cause serious offense? Debatable. Icky? That sounds about right.

The line between a glossy image of a pretty young woman and straight-up exploitation is a blurry one at best. Fanning, who has been the muse of Marc Jacobs for, weirdly, several years now, will be 18 in February. A young woman of nearly 18 is certainly not an entirely sexless being. If you want to see teens – or at least people pretending to be teens – behaving in a sexy manner, look no further than "Gossip Girl" or "Glee." At the Victoria's Secret show earlier this week, 18-year-old Jessica Clarke strutted around in feathers and tiny underpants. And Kate Upton was 18 when she earned herself the title of Sports Illustrated's swimsuit "rookie of the year" this spring, thanks to images depicting her lolling in bed and barely able to keep her bikini top up.

But a sexy teenager is different from a sexy child – or a young woman presented as a sexy child. That's why the most unsettling thing about the recent Victoria's Secret show wasn't women in wings and thongs – it was its "young and in charge"  models sporting bright tutus and knee socks in an unmistakably little girls playing dress-up look. It's what made Terry Richardson's racy 2010 GQ shoot with the cast of "Glee" skin crawling as well – the way it portrayed grown women as lollipop-licking schoolgirls. So the question isn't whether or not the Dakota Fanning ad should have been yanked, or whether the ASA was excessive in its response. The pathetic mystery in it all is why it was ever made in the first place -- why Coty felt the need to do something so grossly "provoking" -- and why anybody thinks that young woman needs to be dolled up like Pretty Baby to sell fragrance.