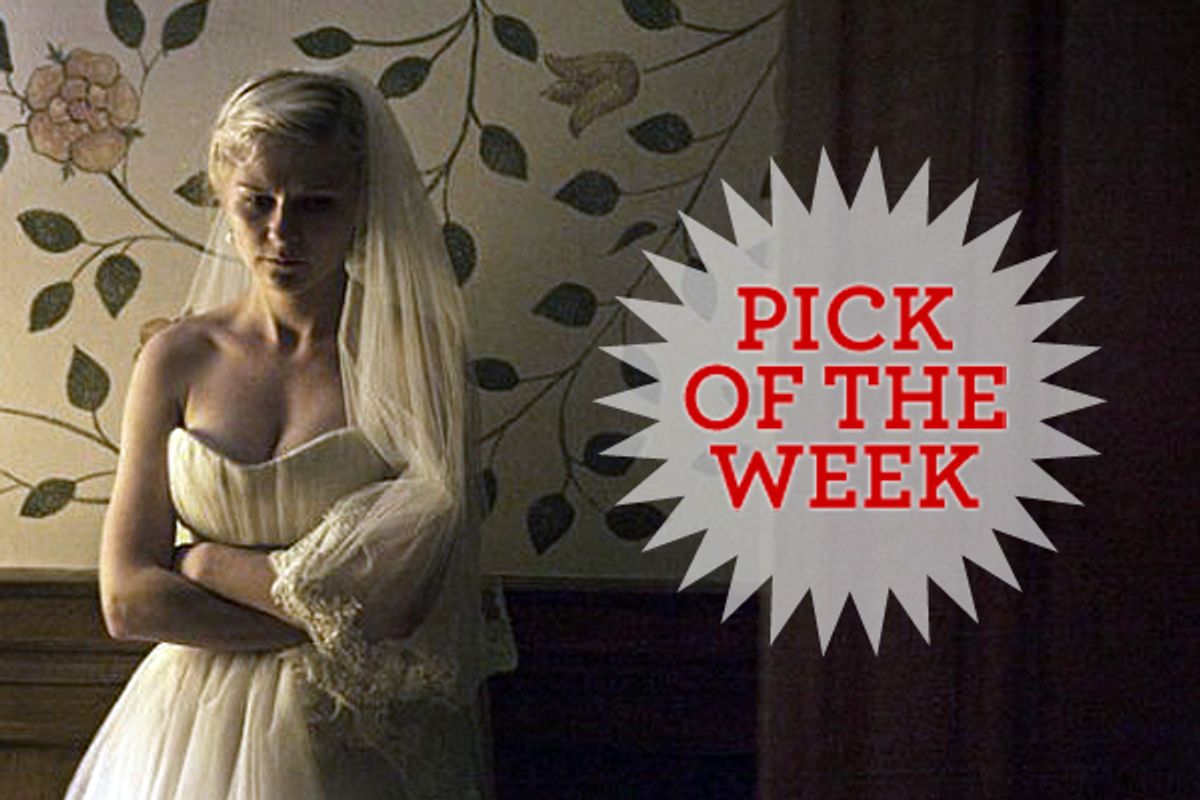 This is a rewritten and much expanded version of Andrew O'Hehir's original review of "Melancholia" from the Cannes Film Festival.

Lars von Trier's “Melancholia” is a ravishing, emotional and often very funny film about a wedding gone wrong, the end of the world and a woman suffering from profound depression. It's a story of competing and oppositional impulses, a story in two sections that's about two sisters and two planets. It's also the story of its director's internal struggle, meaning his own struggle with mental illness and his struggle with maturity. After making the most composed and beautiful and conspicuously adult film of his career, von Trier seemed to wish to thrust it away or destroy it, which was partly why he got in all that trouble last spring by saying stupid things about Hitler.

But here's the thing: Von Trier got trapped by his own nervousness and inarticulacy, and blundered into the electrified third rail of European politics. You can't make jokes about Hitler in public, and you still pretty much can't say anything about the Nazis in France, where national guilt over the occupation remains a fact of life, 65 years after the war. But what von Trier was actually trying to talk about wasn't stupid at all, and it's directly relevant to the artistic method and themes of "Melancholia." With its spectacular photography by Manuel Alberto Claro, the sumptuous costumes and the setting at a brooding Swedish castle, and von Trier's insistent, almost hypnotic use of the orchestral prelude to Wagner's opera "Tristan und Isolde," this movie may be the ultimate cinematic expression of the German Romantic aesthetic, which was an enormous source of inspiration for Adolf Hitler and the Third Reich. Furthermore, it isn't quite correct or adequate to suggest that von Trier is trying to redeem the Romantic tradition from its Nazi legacy. To use his own words, he "desired to dive headlong into the abyss of German Romanticism," good and bad. He's embracing all of it, the Eros and the Thanatos, the sensuality and the mannered artfulness and the love of destruction, the thread that leads from Goethe and Schubert to the worst crimes of the 20th century. He's suggesting that the tendency that leads to magnificent art and poetry and the one that leads to totalitarianism and the one that leads to, say, the cheesiest grade of 1990s music videos are all essentially the same. As von Trier puts it, "Melancholia" is "slightly on the edge of plastic, here and there."

The two sisters are Justine (Kirsten Dunst) and Claire (Charlotte Gainsbourg), whose names are also given to the film’s sections. The planets are our own blue orb and another one, the eponymous Melancholia, which is 10 times bigger and has been “hiding behind the sun” and is now bound for a collision with Earth. (Von Trier has claimed that there's at least some remote astronomical plausibility in “Melancholia,” but verisimilitude doesn't strike me as the most important issue here.) Our dark sister planet makes only a guest appearance in “Justine,” the first section of the movie, as a strange red star in the constellation of Scorpio presiding forebodingly over the title character’s enormous wedding.

Von Trier plays with our expectations for these two actresses: Justine, played by a Hollywood star, is the blonde and conventionally beautiful one, who's marrying a gorgeous if not impressively bright young man (Alexander Skarsgård) at her brother-in-law’s ostentatious country estate. But instead of being normal and well-adjusted, Justine is battling a crippling depression and keeps trying to escape from the whole wedding and from Skarsgård’s character, who’s totally out of his depth and has no idea how to reach her. In perhaps the most bitterly comic scene of “Justine” (and there are many), he shows her a snapshot of the apple orchard he has bought for her, that he hopes will make her happy. He has the best possible intentions, but you can feel her visibly recoiling from him as the seconds pass: I married this guy! And he has no idea who I am! When she gets up to go, she leaves the crumpled photograph on the sofa.

It’s Claire, played by an eccentric art-house brunette, who is the conventional one trying to keep the wedding party glued together as it disintegrates into hostility and pathology. In a later scene, Claire makes meat loaf, something I’m not convinced Charlotte Gainsbourg has ever done in real life. She’s married to a rich American prick (Kiefer Sutherland, who is perfectly cast in that role, of course) who owns the Swedish castle where the wedding takes place, and is inordinately fond of its 18-hole golf course. (We also see the flag atop the 19th hole a couple of times, which at many golf clubs is a euphemism for the bar, and here is -- what, exactly? A gag? A von Trier symbol of apocalypse?)

Shot by Claro in gloriously rich colors, the “Justine” half of “Melancholia” is a rich comedy of manners and buried family secrets, deliberately recalling Bergman’s country-house comedies, like "Wild Strawberries" or “Smiles of a Summer Night,” and also perhaps “The Celebration,” by von Trier’s onetime Dogme 95 collaborator Thomas Vinterberg. Its big and crackling cast also includes John Hurt as Claire and Justine’s irresponsible reprobate dad (who addresses all women as "Betty"), veteran Swedish actor Stellan Skarsgård (Alexander's real-life father) as the ruthless P.R.-agency boss who’s trying to get her to churn out a slogan on her wedding night, and Udo Kier as a queeny, resentful wedding planner who refuses, as his outrage mounts, even to look at Justine. It’s a lot of fun — not a concept often associated with von Trier’s work — even as the mutual hostility starts to come boiling through the glossy surface like hot magma. Best of all is ’70s art-film goddess Charlotte Rampling as Claire and Justine’s terrifying mother, who serves as a sort of wrathful voice of God. Weddings are stupid and love is not forever, she snaps at Justine: “Enjoy it while it lasts.” When Justine tries to confide in Mom that she feels frightened, the latter replies, “We all are, sweetie. Just get on with it.”

Von Trier has repeatedly said that this is “not so much a film about the end of the world as a film about a state of mind,” and clearly that's true. Still, he wants us to know what will happen in “Claire,” the final section of the film, before we get there, and we learn the ultimate fate of the Earth in a brief, haunting montage of extraordinary images -- set, in fact, to the "Tristan" overture -- before we even get to the wedding scenes. His first shot is a stunner, a close-up of Dunst’s face looking as stricken and depressed as a beautiful face can, with birds falling from the sky all around her. Here's what von Trier had to say about revealing his own ending, which I plan to clip and resend to every reader who ever writes to accuse me of violating spoiler protocol: “Sometimes we see a film to find out how it ends, and I object to that. Do we go to a James Bond film and think there’s a chance he may not survive? You can know what happens and still not know how it happens, or still hope that you are mistaken and that it might not happen, and that is interesting to me.”

“Claire” is apparently set some weeks after the wedding implosion, and the cast of characters is stripped down to the two sisters, Claire’s husband, John, (Sutherland) and their son, Leo, who is 7 or so. Justine has turned up back on Claire and John's doorstep, so depressed she can barely speak or walk. Gainsbourg told me in a recent interview that when von Trier's wife saw the scene in which Claire tries (and fails) to get Justine into the bathtub, she was reminded of her own attempts to deal with the director's depressive illness. Ultimately, Justine's depression will become a peculiar source of strength, as this small family unit follow Rampling’s advice and just get on with it, which means preparing however they can for the possibility or likelihood that that expanding blue ball in the sky — von Trier’s visual effects team has done some amazing work here — will bring with it the end of life on Earth. Indeed, Justine declares that there is no other life in the universe, and she thinks that’s a good thing: “The Earth is evil. No one will grieve for it.”

That moment upset me profoundly the first time I saw it; I was immediately in Claire's corner, asking, "But where will Leo grow up?" On second viewing, this thought experiment on von Trier's part strikes me as a theological argument, and perhaps even as a way of reintroducing God, in covert and obscure form, into a godless universe. When I suggested this to him in our interview last year, he didn't disagree, and as a friend of mine observed after a recent screening, "Melancholia" has an almost religious intensity in its latter stages. Faced with the ultimate irrelevance of all the conventions and rituals she values, Claire moves from being Justine's caretaker into total panic and despair, while it's Justine who pulls herself out of her personal pit of gloom long enough to gather her sister and nephew to her, in a loving embrace, at the very end. Indeed, Justine seems to view Melancholia as a friend or kindred spirit or lover; in one breathtaking scene, she reclines naked on a riverbank at night, luxuriating in the double light of our own Moon and the new planetary visitor, looking like an extraterrestrial Rhine Maiden. “Claire” is harder to watch because we know how it’s going to end, but then, we know how our lives will end and that doesn’t stop us from wanting to live them.

The end of "Melancholia" is both gorgeous and terrifying, but von Trier is right that it's not a movie about the end of the world. It might be expressing the fact that sometimes we all feel as if we wish the world would end -- and it delights in going much further than Hollywood disaster movies ever dare to -- but that's a different matter. It’s about facing life and death and mental illness with as much courage and love as you can muster, and recognizing that it isn't always enough. I'm not sure which aspect of "Melancholia" makes von Trier most uncomfortable, the grand and gorgeous romanticism or the bitter, tender realism. Either way, this is a better movie than I ever suspected this brilliant but admittedly damaged and self-indulgent director would make, and I suspect he may feel the same way.

"Melancholia" opens this week in New York and Los Angeles, with wider national release to follow.