Stylish textiles for the modern world 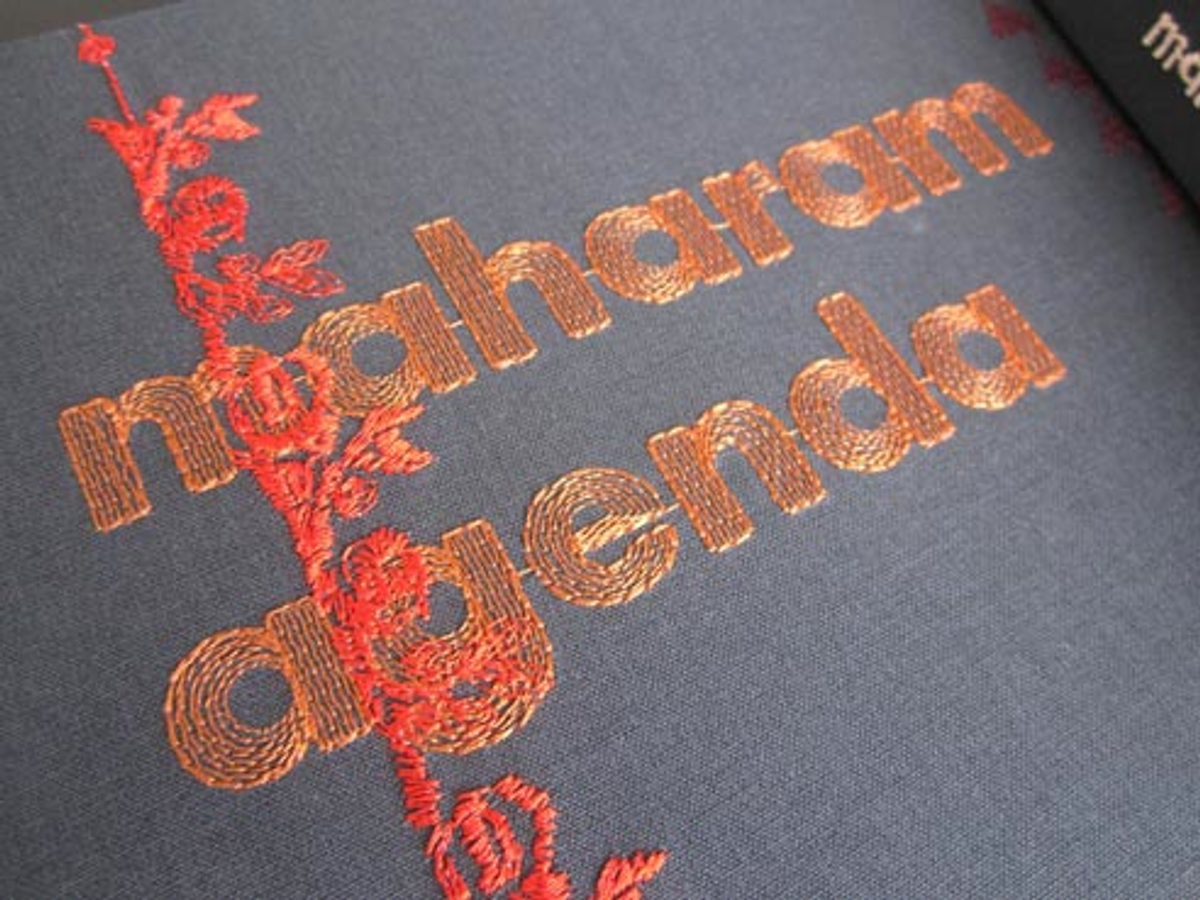 Maharam is a fourth-generation family-run business that was once known for making children costume patterns. It has been reinvented by each successive generation, which probably accounts for its unusual longevity in the dysfunctional realm of family business. The current director Michael Maharam’s great-grandfather was a Russian immigrant who sold remnants, initially from a pushcart, on the Lower East Side. His grandfather and his three brothers discovered a need for acoustical dampening in movie theaters adapting to "talkies" in the '20s and went on to be a leading supplier of textiles for set and costume design on the Broadway stage. In the late '50s, his father ventured into technically engineered, performance measured textiles for commercial interiors. In 1997 Michael and his brother took over the disheveled remnants of this business with a focus on design with exploration through “re-edition and collaboration” and by delving into classic modern and late modern design. Today Maharam builds its wares on digital technologies and individual artistry. "Maharam Agenda" (Lars Muller Publisher) is a gorgeously designed collection of recent accomplishments, with a totally embroidered cover. I spoke to Michael for my "Dialogue" Column in Print about creating the distinctive identity for the latest incarnation of the company’s arts and crafts.

I first became aware of Maharam through your revival of mid-century modern textiles. You've done extraordinary pillows, for instance. How did this interest come about?

When we took charge of Maharam, our collection was haphazardly assembled, and we needed to create order. I was an avid collector, and at the time, mid-century modernism was emerging from a cyclical slumber and I realized that nearly every noteworthy mid-century multi-disciplinarian designer had designed textiles, virtually all of which had vanished into obscurity. Thus began my international treasure hunt, seeking clues, tracking down aging family members and bits of fragmented knowledge, and rummaging through dusty musty archives. Since we typically do not produce finished products, the pillows were merely an extension of this effort intended to create access through MoMA, Moss, Design Within Reach, Vitra and various other design venues. Cliché as it sounds, they are all my favorites ... like children ... given the considerable emotional commitment and effort that went into the pursuit and development of each.

Are you a manufacturer, designer, impresario or what?

We do not manufacture, but rather work with mills across the globe based on our project and product requirements as married to their specific area of production expertise. We sell to commercial architects and interior designers, and recognize that we are essentially in the business of narrative – telling interesting stories through the products we choose to develop.

I take that to mean storyteller. As a graphic designer, oddly, I never gave much thought to textile design. And yet many graphic designers I admire - Paul Rand, Alvin Lustig, Massimo Vignelli, Milton Glaser and Maira Kalman - have dipped into designing for fabric. Who would you say makes the best textile designer? Is it someone trained to be one or someone who "dips" in?

By nature, woven textiles (unlike printed textiles, which are little different than printed paper) are complicated to engineer and produce – conceived on multiple parallel tiers, yarn, pattern, texture and color all tied together through weaving and finishing. Extreme expertise is essential to the equation. We choose to collaborate with non-textile designers because they ask questions that we inevitably often no longer ask of ourselves based on the rote of our innate awareness of the limitations, and often from these questions revisited, we find new ways which yield new and innovative results. The answer is both.

What qualities do you want from a designer that are unique to textile design?

In an ideal world, a great textile designer has sophisticated technical expertise, color sense, pattern (or graphic) sensibility and business acumen. Add to this refined stylishness and elevated cultural awareness and you have the potential for a real force. Just like any other medium, I suppose.

Many of your recent projects are born of digital technology. What is possible now that could not have been accomplished five years ago?

I'd love to say anything is possible, but I'm sure a whole new anything will be at our disposal five years from now. On the textile design side, CAD is an increasingly powerful tool, in its sensitivity and ability to communicate with production. The utopian model would permit us to produce short runs of immediately generated design on a moment's notice ... even randomly generated patterns which provided our clients with a result both arbitrary and predictable, a notion we've discussed with John Maeda (of course!) and others over the years. More concretely, our Maharam Digital Projects are large-scale wall installations – a surrogate for big art, or high-quality content in the realm of "environmental graphics" – created by emerging and established artists, photographers, fashion, graphic and industrial designers. Scaled and produced to order on a project-specific basis, we print using water-based pigment inks on a latex-saturated cellulosic ground which yields excellent color rendition and near archival quality. These are un-editioned works, and each of our contributors is compensated equally and sold at the same price ... be they seven figure artists or graphic designers working at an hourly wage. It's extremely egalitarian and very gratifying for all. In graphic design world, collaborators include cyan, Casey Reas, Marian Bantjes, Karel Martens, Post Typography, 2x4, Abbott Miller, Harmen Liemburg, Niesen and DeVries, Charley Harper (our sole deceased contributor).

There have been many textile avant gardes. You have engaged Claudy Jongstra, among others. What do you look for in un-traditional handcrafted materials?

A challenging area, as our clients insist on production, performance and predictability – products that perform to commercial standards and resemble the samples they select from. Claudy is an exception – she raises her own sheep, shears them, processes their wool, blends it with other fibers and dyes the resulting textiles with dyestuffs she creates using plant material which she grows. She is our benchmark! In a more commercial realm, Hella Jongerius is gifted in this, finding a place where craft and manufacturing intersect. Her unique approach to craft from the perspective of industry, and her particular combination of these two seemingly diametrically opposed modes of production in all manner of products, has allowed her to create individuality on a mass scale and to successfully navigate the pitfalls of nostalgia associated with a more craft-for-craft's sake mentality.

I noticed on your website a virtual library. The range of design and fabric is awesome. I was particularly taken with Nano Point and Meganano Point. They look like perfect designs for cloth bookbinding. What other products does Maharam make using textiles?

MegaNano was our project with Bruce Mau intended to address the specific needs of the open office environment, an often stultifying landscape of workstations and the loom fodder which covers them. Bruce conceived a system of compatible textiles on multiple scales that could be used together to create depth and dimensionality across this landscape. Though our textiles can and have been used for many obvious things – the aforementioned pillows, as well as hats, clothing and bags most obviously – our most rewarding present-moment collaboration is in footwear with Nike, bringing unexpected pattern, texture, color and material to this medium.

Your company extends your quality standard to its graphics. Do you see an intersection between graphic and textile design?

Like many, initially we relied on consulting graphic designers to create our identity, advertising and collateral. We are an OCD driven organization and recognized that extreme consistency and cohesiveness were critical to conveying an integrated holistic message over time. We were at the mercy of the hiring, retention and management skills of our graphic design consultants, and dreaded the moment when we would have to acquaint every latest new hire with the whole of our corporate culture, visual language, strategy and tactics in a crash course with the hope that they A) got it, and B) were gifted enough to do something with it. We chose to form A4 Studio, our in-house graphic design arm, for this reason, and we love the control and the outcome and embrace the graphic design medium with fervor equal to that of all other forms of design expression at Maharam, in textile, architecture, interior, furniture, show and interior design. We feel that expression as a corporate entity committed to design is a fully dimensional experience, and anything less is merely commerce. A4 interacts with our in-house and consulting contributors on every project, and everyone gains reciprocally and finds extreme gratification in the process. A pleasant example presently in work is a sample bin or box for our client's libraries being developed by Konstantin Grcic in Munich, with Dutch graphic designer cum cartographer Joost Grootens handling embellishment, all orchestrated and made harmonious by A4.

In the textile world, what is the future?

We're in a slow-moving fashion business, so the future is seasonal, inspired and catalyzed by the world around across all media, and expressed with a respect for the practical needs of our clients coupled with the embrace of risk and through the contributions of interesting characters we find along the way.