The shame of Penn State

The university buried a child sex scandal for years. And rioting students dare blame the media? 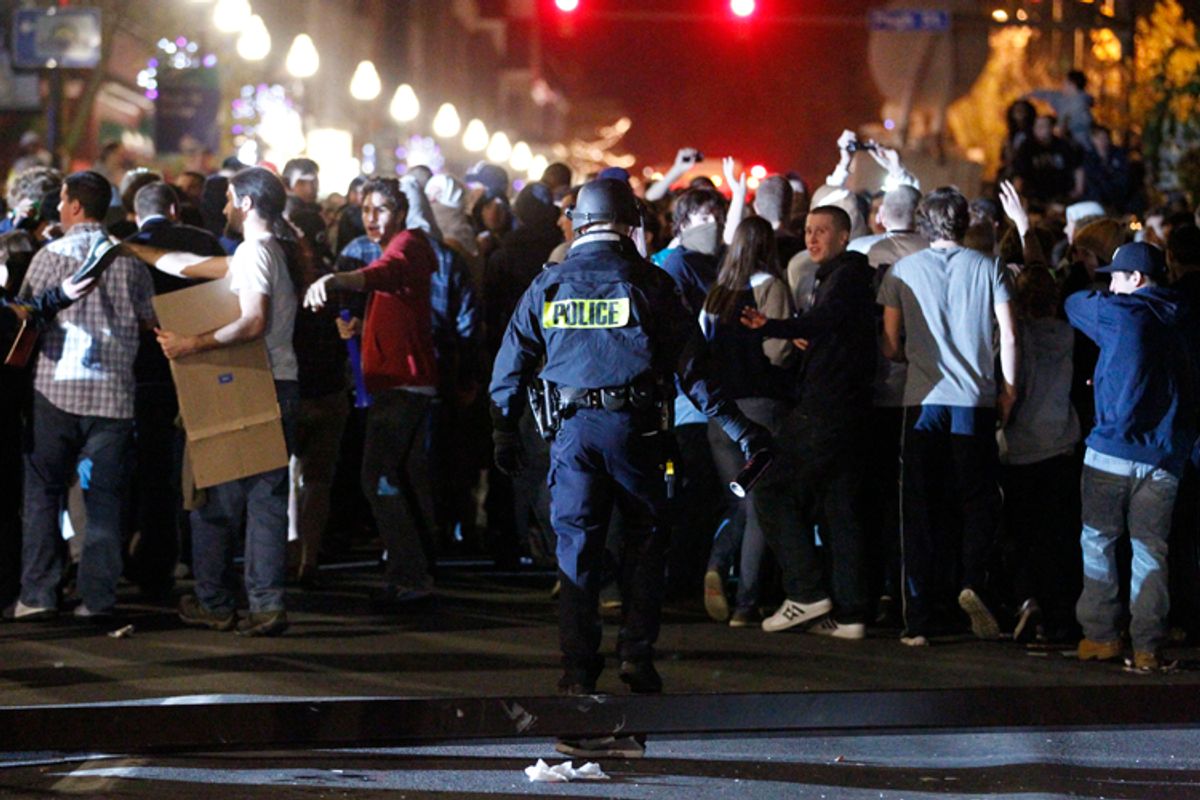 Police hold back students after they reacted off campus Nov. 10, 2011, in State College, Pa., to firing of football coach Joe Paterno. (AP/Matt Rourke)
--

On Wednesday night, the Penn State Board of Trustees met -- for the first time since the child sex abuse scandal broke -- and subsequently announced that football coach Joe Paterno and university president Graham Spanier had been fired. No, that's wrong, let's take those names in order of importance – first Graham Spanier and then Joe Paterno. What followed was a jaw-dropping torrent of angry, abusive questions from Penn State students directed to a cowed and bewildered John Surma, vice chairman of the trustees.

With the purpose of clarifying the issues, I'm going to do an instant replay on the questions and help Surma with the answers. (The following questions were taken right off the CNN telecast.)

Me (putting my hand over the mic): Hold it, John, I got this one.

You ask to define "the best interests of the university"? Let me tell you in as clear language as possible, you arrogant little jerk. Over the past 15 years there were at least eight boys raped by former Penn State football coach Jerry Sandusky -- oh, sorry, even though the grand jury has met on this, we still have to say "allegedly raped." Anyone connected with this, anyone who enabled Sandusky to continue doing what he was doing -- oh, sorry, allegedly doing what he was doing -- and doing it on the Penn State campus, and anyone who had knowledge of his activities and did not act to stop him deserves to be immediately dismissed.

Me: Shut up. I'm not finished. You asked the question and I'm answering it.

It would have been "in the best interests of the university" if the firings were announced on Sunday morning, the day after the findings of the grand jury were released. That, at least, would have made it appear to the public that somebody at Penn State was treating this matter with the gravity it demands.

Since you don't seem to get it, let me spell it out for you. On Saturday, March 2, 2002, a then-graduate assistant who is currently an assistant PSU football coach, Mike McQueary -- you all remember him, he was also a quarterback here and the one with the shock of red hair that makes him look like Archie in the comics -- told the grand jury he saw former assistant coach Jerry Sandusky naked in the shower, raping a young boy McQueary thought to be 10 years of age.

Now, let me be clear about this: I'm wondering why McQueary, a strapping young quarterback, didn't do something right then and there and stop this boy from being assaulted? Instead, McQueary -- who, for some unfathomable reason is not only still on the Penn State coaching staff, but will, as of this writing, be with the team this Saturday in full view of a national TV audience -- called not the campus police or the university president, but his father, who didn't tell his son to go to the campus police or the university president but to the head football coach.

According to testimony Joe Paterno gave the grand jury, Paterno said McQueary was "distraught" and he wasn't "specific." This leaves me wondering whether Paterno was, then or now, a liar or merely an idiot. Stop shouting, I'm not finished.

If McQueary was "distraught," did Paterno not think that he had seen something terrible? And if he thought McQueary wasn't "specific," why did he not ask him to be specific?

Instead of calling the police or the university president, Paterno called athletic director Tim Curley, another former assistant coach. Curley brought in Gary Schultz, vice president of finance and business, whose duties included supervision of the campus police.  By the way, Paterno called Curley not the same day he met with McQueary, but waited at least 24 hours. Curley and Schultz met with McQueary eventually -- eventually, as in no one is sure how many days passed, but estimates are that it might have been as late as March 27 -- and promised to investigate.

No one knows exactly when president Spanier was informed, but it appears to have been after the March 27 meeting.

Are you getting all this? Is it making an impression?

What was done by the Penn State officials between March 2002 and the recent grand jury investigation was ...  nothing!  No one went to legal authorities and no action was taken. Oh, I just remembered.  That's not true.  According to the grand jury report, after the incident in 2002, someone -- again, presumably Curley -- told Sandusky "not to bring any boys on campus." And Sandusky did have his keys taken away, though precisely what that means isn't clear since Sandusky -- who, you'll be interested to know, is walking around today, free on $100,000 bail --  was still using the Penn State facilities as late as 2009, when the last sex abuse charge, the one that got a grand jury involved, was made by the mother of a 12-year old boy.

And do you know why in 2002 Jerry Sandusky was a former assistant coach?  "Officially" he resigned in 1999 after Paterno told him he would not be head football coach. But coincidentally, he resigned soon after a mother confronted him on campus twice and asked him not to shower with boys again. Sandusky refused, and campus police tapped into at least one of their conversations, but the authorities decided not to file charges. Happily for Sandusky, his resignation agreement included a clause that he continued to have an office and full access to the Penn State football facilities.

Even better for Sandusky, he was allowed to retain his position in the Second Mile, a charitable organization for at-risk children, which he helped found.

I should add that it appears that no one at Penn State bothered to inform anyone else associated with the Second Mile about either the 1998 or 2002 incidents involving Sandusky.

Finally, let me also add that there is no conceivable way Joe Paterno could not have known about what happened in 1998, and no way he could have misinterpreted what McQueary related to him in March 2002. Yet he continued to allow his longtime friend Sandusky free rein on campus.

To sum up, what would have been in "the best interests of the university" is for every person who knew about Sandusky and did not contact legal authorities to resign, allowing the university at least some measure of dignity in dealing with this horrible scandal.

Angry student: Why was Coach Paterno informed about his firing over the phone?

Me: Have you been listening to anything said, you air-headed jackass? Joe Paterno enabled Jerry Sandusky. He's the one who could have stopped him, at least in 2002 and probably back in 1998. He did nothing. And if you don't understand that, let me say it a different way:  Joe Paterno and his "boss," Graham Spanier, were fired because they didn't have the common sense or decency to resign.

Instead of resigning as soon as the grand jury report was made public, until Paterno's apologies Wednesday night after he was fired, the Paterno family took an indignant and defiant stance. Scott Paterno, Joe's son and also his attorney, angrily asked reporters: "Do you really think we'd let a rapist walk around on campus?" To which the reply should have been: That's what you allegedly did.

Angry student:  Was any consideration given as to how his would affect the football program?

Me: The football program? The football program?? Are you serious? A former assistant coach was just indicted for over 40 counts related to sexual assault on a child, your football coach was fired in disgrace, your athletic director has been indicted for perjury, and a current assistant coach will, I'm sure, soon be fired. And the crimes against  humanity -- against children -- took place in the university's athletic facilities. Do you think you will even have a football program when the full extent of this becomes known?

Do you even think you're going to have a university?

What? You think I'm guilty of hyperbole?  Have any of you here tonight, the ones who are going to go out and overturn a news truck -- because, of course, it's all the news media's fault --  and tear down light posts thought about what's in Penn State's future? I'm hearing guesses on CNN and MSNBC that this could cost the school -- who knows? -- as much as $100 million.  $100 million?  You should be so lucky. Don't you understand that under no circumstances can Penn State allow any suit to go to court?  Can you imagine a long, protracted trial in which Joe Paterno and who knows how many victims would have to take the stand as witnesses and relate graphic details? There is no way any suit will go to court.  The university will have to settle out of court and will hardly be in any position to negotiate. When legal fees and settlements are all added up, Penn State will be lucky if every building on this campus isn't rented out to a community college.

So don't worry about the football team.  Worry about the fact that from now on, whenever the name of Penn State is mentioned, people all over the country -- make that all over the world -- will be sneering, snickering or spitting. Worry that a long period of penance and healing must begin, and that your actions are delaying this process.