When the recession breeds kitchen creativity 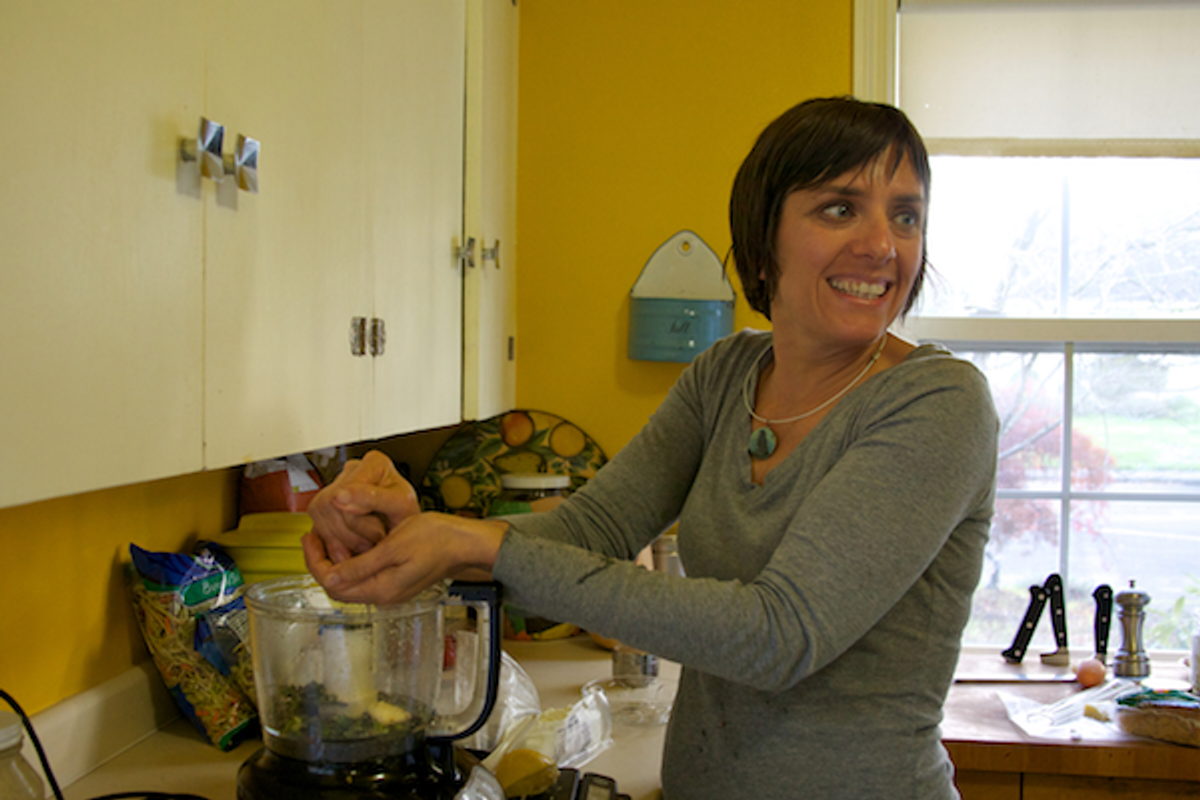 Nicole’s appearance does nothing to dispel my fear. She’s lean and healthy-looking, and her intense blue eyes feed my suspicion that I’m in the clutches of a health fanatic. I contacted Nicole because I’d heard good things about her date chèvre truffles and her pork tamales. For some reason, it never occurred to me that truffles and tamales could be part of a health agenda; I’d already committed to sitting in on one of Nicole’s cooking lessons when I received an email informing me that, in addition to the dates, the class would focus on broccoli slaw as an alternative to pasta. I informed Nicole that I might have to leave early.

Low-fat and low-carb cooking do not fall into my sphere of interest. I suffer from an ancestral devotion to the fat-centric cooking of James Beard. Pasta is my refuge from the vagaries of life. My only nod to healthy eating is eschewing junk food, which makes me feel virtuous. In truth, I just prefer snacking on real food: bacon-wrapped dates, for instance.

Nicole ushers me into her small, homey house. The savory aroma drifting through her kitchen doesn’t smell low-fat. She further calms my suspicions by offering me a pork tamale to snack on while we wait for her student to arrive. To cut down on lardy masa consumption, Nicole has tweaked the traditional ratio of corn to pork. In other words, this tamale has extra meat -- my kind of health food. Nicole’s take on pork filling is tender and perfectly spiced. I watch her work with renewed interest.

Nicole Evans is a veteran of the food industry. She got her first job at Burger King when she was 15 and has been working in restaurants ever since. In Chicago, she waited tables and made desserts at a place called Leo’s Luncheon. Upon moving to Portland, Ore., she got a job as a line cook. She’s held the position for eight years, but her hours have been cut since the economic downturn. Nicole looks for the silver lining, and says the cut inspired her to make food to sell: tamales, truffles and now enchiladas. People were crazy for her tamales, so she started teaching cooking classes two months ago. Her nascent business, My Goose Lily, helps make ends meet and provides a creative outlet. “I couldn't draw a picture to save my life, but give me a few random ingredients and I'll figure out a way to make them taste good together,” she says, adding pureed roasted vegetables to the tomato sauce bubbling on her gas range.

Portland is in the midst of a food cart renaissance, and Nicole would love to be part of it. But for now it’s out of her financial reach. “There are quite a few people doing the same sort of thing,” she says. “I have a friend in Chicago who calls himself the Pepperoni King. He sells pepperoni rolls at farmers markets. I have a friend here in Portland who’s selling bacon and pickled veggies and fruits. Not everybody has the money it takes to open a restaurant or food cart.” Nicole’s not complaining. “I love what I do, and it's just really encouraging to have people like what I'm doing,” she says.

Although she has a website in the works, at this point she’s met most of her students at her gym. “The low-cal, low-fat angle is probably a good angle for getting students to pony up, huh?” I ask. I’m willing to give Nicole the benefit of the doubt. Anyone who can make a good pork tamale can’t possibly be a true health nut. Maybe she just sees an excellent way to make money. But my question just gets her started on how much she enjoys discovering more healthful alternatives to packaged foods. Cooking from scratch is cheaper and gives her more control over what she’s eating. She’s excited to pass her strategies on to her students. “I think about food all the time. How can I make something that’s healthy, but that’s still sweet and still good? I lie in bed at night and think about how I’m going to make something work in the kitchen.”

Nicole tailors each class to the favorite cuisine of the students. Today’s student is a bubbly 23-year-old redhead from Nicole’s gym. She’s lost eight pounds by working out, but she’s not quite at her weight-loss goal. She’s hoping Nicole’s class will help her develop better cooking habits. Nicole will be demonstrating how to make salad, spaghetti sauce and turkey meatballs over broccoli slaw, and goat cheese date truffles.

Nicole takes care to explain each step in detail. She has a natural, chatty way of teaching and occasionally throws out random and endearing asides. “I’m sorry about the soft rock. I can’t help it. I love it!” she says, and later (on an unrelated tangent): “I’m like a 55-year-old gay man trapped in a 38-year-old woman’s body.” As she loads her food processor with dates, goat cheese, vanilla and cocoa powder, she instructs: “Look for Medjool dates with pits. The pits keep them super soft and super moist, and that’s what you’re looking for … The better the cocoa powder, the better the truffles are going to be … If the mixture seems too dry, add a little extra vanilla.”

When Nicole has finished blending, she deftly rolls the chocolate mass into tiny, pretty truffles. A mere five minutes after she gathered her ingredients, we have a plate of truffles. She says the chocolates are better after a spell in the refrigerator, but she allows us each to sample one immediately. The last of my suspicions about Nicole melt away when I taste the truffle, which is creamy, sweet and delectable. The goat cheese base balances the sweetness of the dates and gives it an interesting undertone; the dusting of unsweetened cocoa powder adds smoky complexity.

Nicole is a devotee of the bulk aisle and discount stores such as Trader Joe’s, Costco and Winco, and she says that if she shops smart, each batch of truffles costs about $3, or 15 cents each. One of her goat cheese date truffles is 57 calories, but dates are the only sweetener. Unlike sugar or corn syrup, dates are rich in protein, potassium, calcium, magnesium and vitamin A. I eat five truffles and I don’t feel remotely sick, which would not be the case if I were eating conventional candy. I decide I’m in favor of a health strategy that allows me to eat more candy while still feeling virtuous.

The tamales and truffles and soft rock have certainly softened me up, but I’m still not excited about the idea of spaghetti sauce and turkey meatballs over broccoli slaw. After Nicole sautés the broccoli slaw in a small amount of olive oil and delivers a tutorial in meatball-making, she spoons the finished product onto plates. “I’m not that hungry,” I protest. “Just a little for me … ”

The broccoli slaw is not picturesque. I sigh to myself, thinking that the delicious-smelling sauce would be so much better on real pasta. But that’s before I taste it. After I gingerly take a bite, I amend the statement: the delicious sauce would be a little better on real pasta. That said, the slaw absorbs more sauce than I would have thought, and the result is light and savory. I have to admit it: The broccoli slaw is actually kind of good, particularly for a food so low in calories: 25 calories for 3 ounces. For the record, the photographer and the redhead are entirely enthusiastic; both claim that they’re going to permanently swear off pasta in favor of broccoli slaw. I am not quite there, but I’m definitely stealing Nicole’s sauce recipe. Nicole is Italian-American and she grew up cooking for her family, so it’s no surprise she knows her way around a sauce. The red sauce tastes classic, yet she has added an entire tray of roasted (375 degrees for one hour) pureed vegetables to the tomato sauce, which gives the finished product body and added nutritional punch. It’s really good. “For those of you who have kids, this is a great way to sneak more vegetables into their diet,” Nicole notes.

Nicole is speaking from experience: her business name, My Goose Lily, is one of her nicknames for her 4-year-old daughter. “I wanted Lily to be included in the business in some way. She is awesome and totally deserves to be recognized,” Nicole says. Lily is not in attendance, but Nicole shows me a picture: a lanky little kid in a supergirl costume and pink cowboy boots. The picture is adorable, and it sums up my whole notion of My Goose Lily: plucky, fun and original. As this thought crosses my mind, I realize I am rhapsodic about someone who just trapped me into sitting through a lesson on low-carb cooking. I thought I was a harder nut to crack. But here’s the thing: Good food is most certainly the way to my heart, and Nicole had me with the tamale.