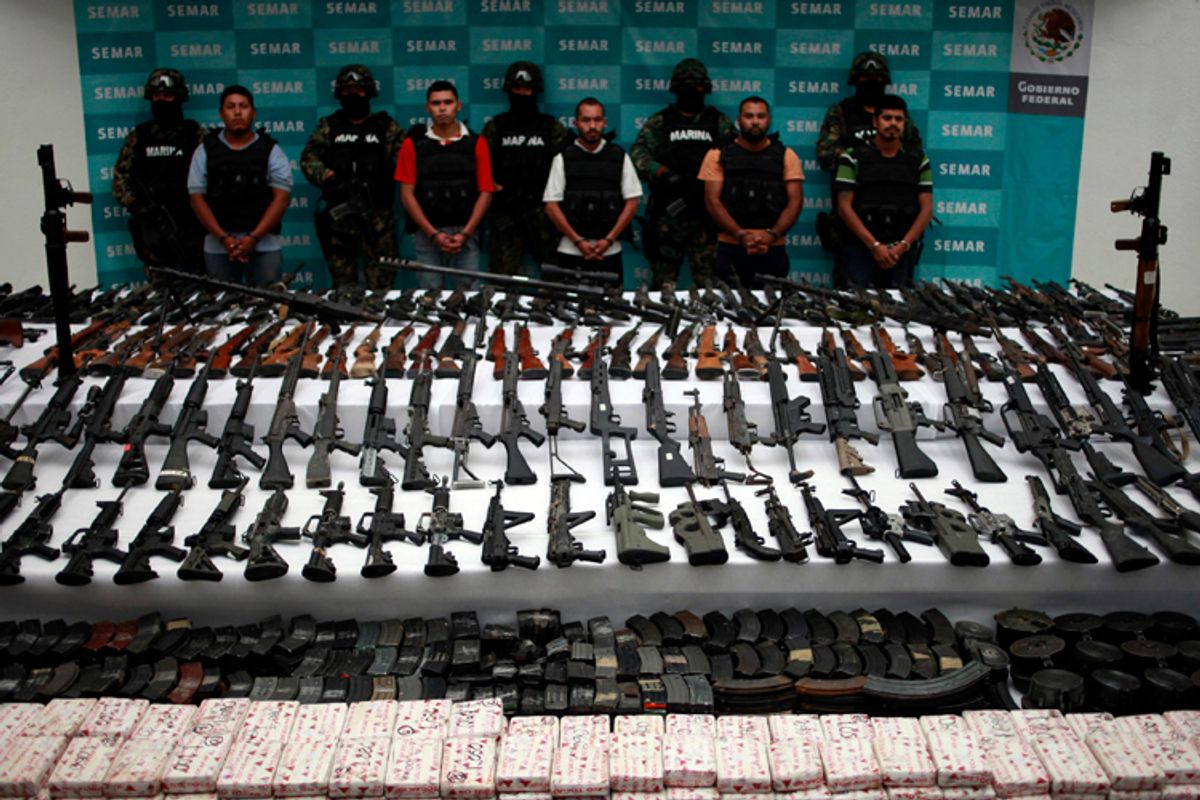 Rifles, guns, hand grenades, uniforms of the Mexican navy and the U.S. Army, cartridges and cocaine were seized in an operation against the Zetas drug cartel in Coahuila and Nuevo Leon in the north of Mexico. (Jorge Lopez / Reuters)
--

Among the many striking facts that journalist Ioan Grillo recounts in his new book, "El Narco: Inside Mexico's Criminal Insurgency," is that the Mexican city of Juarez became the murder capital of the world last year, beating out Mogadishu and Cape Town, South Africa, for per-capita homicides. Some 3,000 people were killed in Juarez in 2010, yet in El Paso, Texas, the U.S. city right across the river -- almost a literal stone's throw away -- there were only five murders.

Some would say this proves that better law enforcement is all Mexico needs to end the drug-cartel violence currently drenching its northern states in blood. Or maybe, as Grillo suggests, it merely shows that when the cartels and their associates want to kill someone in El Paso, they first take their victim across the border where, chances are, the murder will never be properly investigated.

Whatever the case, the contrast suggests why the rampant carnage in Mexico's border states seldom makes the front page in the U.S.; it seems far away, despite being right next door. However, cables made available by WikiLeaks indicate that American officials -- including Secretary of State Hillary Clinton -- are worried that the cartels are taking on aspects of an "insurgency," which could make them a threat to the Mexican government. Narco tactics now include car bombs, videotaped executions, the deliberate targeting of civilians and many, many attacks on policemen, soldiers, federal officials and elected leaders (one mayor was stoned to death on the main street of his own town) -- all startlingly reminiscent of militant and terrorist campaigns prosecuted elsewhere on the planet.

Grillo is a Briton living in Mexico City who has been reporting on Latin America for a decade. "El Narco" lays out the history of drug smuggling in the region over the past 100 years or so, and then homes in on the rise of the Northern Mexican cartels during the 2000s. This flourishing was partly a result of U.S.-aided crackdowns on the Colombian cocaine industry, a phenomenon described by the "balloon theory": If you squeeze the drug trade in one area, it pops up someplace else. But Grillo also believes that the fall in 2000 of the PRI (the Institutional Revolutionary Party, a one-party oligarchy that ruled Mexico for over 70 years) led to the kind of organized-crime free-for-all that followed the collapse of the Soviet Union.

Drug smuggling is so lucrative and Mexican police and soldiers are so poorly paid that corruption has always been a feature of the landscape. But there's stable corruption -- where everyone knows who's in charge and who must be paid -- and unstable corruption, in which the power structure becomes uncertain and ambitious criminals see the opportunity to increase their slice of the action. The cartel violence in Mexico centers around clashes between rival syndicates (each with its own set of bought officials), who vie for key cross-border routes, called "plazas," while fighting off the relatively weak efforts of law enforcement to crack down. The result is a crazy, upside-down world that often sees state police (on the local cartel's payroll) battling federal officers (who may or may not belong to another mob).

In the late 1990s, an ambitious drug lord in the town of Nuevo Laredo hired a former special-forces commander to assemble a militia of men with similar experience. They became the Zetas, a brutal, but well-organized team of enforcers for the Gulf Cartel. The cartel leader, Osiel Cárdenas, then felt powerful enough to take the unusual step of fighting back when the federal government came to arrest him, becoming, as Grillo puts it, "the first narco insurgent." Cárdenas lost, but not before what was once a cops-and-robbers conflict had become militarized. The cartels now have automatic weapons, grenade launchers and explosives, and no compunction about using them when innocent bystanders are around. It's estimated that the current drug wars have claimed 35,000 lives.

The cartels have also spawned their own culture: the famous narcocorridos (ballads about gangsters and their exploits, often commissioned by the subject himself for a handsome fee), a low-budget video industry cranking out titles like "Me Chingaron Los Gringos" ("The Gringos Fucked Me") and a clothing style called "buchones," which, Grillo writes, "mixes urban and rural, traditional and modern. Buchones like cowboy hats and ostrich-skin boots, but also sneakers and brightly colored baseball caps."

The narcos even have their own flavors of quasi-Catholic folk religion, with such patron saints as Santa Muerte, a cross between the Grim Reaper and the Virgin Mary, and a possibly apocryphal early-20th-century outlaw named Jesus Malverde. (In one of the book's rare funny moments, Jesus Malverde's shrine keeper asks Grillo if his country has a similar Robin Hood figure, and Grillo explains that, actually, they have Robin Hood.) Strangest of all, the La Familia cartel embraced as its bible a book on "muscular Christianity" titled "Wild at Heart" (by an American writer once described as "the Robert Bly of evangelicalism") -- until, that is, the cartel's leader wrote his own spiritual guidebook.

The strength of "El Narco" lies in its shoe-leather reporting; Grillo interviews everyone from a former cartel assassin to DEA agents to grieving families, snitches, pot and poppy farmers, illegal immigrants and gangbangers. He's the sort of journalist who'll pop into a plastic surgery clinic or taqueria if it turns up on a list of cartel-linked businesses, just to see what he can see. Writers this knowledgeable about the subject and with no particular ax to grind are rare because covering the cartels can be dangerous. Last fall, the main newspaper in Juarez, El Diario, published an open letter to cartel leaders ("the de facto authorities in this city"), titled "What Do You Want From Us?" in an effort to figure out whatever it was that caused several of their staffers to be killed. Lately, the Zetas have taken to hanging corpses labeled "Internet snitches" from railway overpasses.

So, perhaps top-notch writing is too much to hope for as well, though there are times when you want to shout, "Raise your hands and step away from the thesaurus!" Grillo's many references to "severed craniums" had me baffled (do cartel thugs pack bone saws?) until I realized that he means "heads," and unless Mexico is brimming with cheerful drug dealers, he's got the word "sanguine" confused with "sanguinary." At times, though, Grillo's malaprops can be grimly amusing, as when he describes a gang who makes a practice of "devouring bodies in acid." Not just narco killers, but cannibals with cast-iron stomachs!

Nevertheless, these are minor glitches, and a solid, comprehensive popular book on the current drug wars is much needed. Americans ought to be better informed about the cartels who are challenging Mexico's government for supremacy in the border states. American citizens buy the drugs that fund the cartels' reign of terror and American gun shops sell them the outrageously lethal weapons they use to enforce it. So far, the slaughter has barely lapped our own border, but it is nevertheless of our making. If more of us acknowledge this truth, then there's a better (though still slim) chance that we can replace the failed War on Drugs with a more realistic and humane drug policy -- and do it before that lapping becomes a flood.