A bear, a baseball glove and "Boardwalk Empire"

An unusually mysterious, subtle episode of HBO's gangster drama showcases the program at its wily best 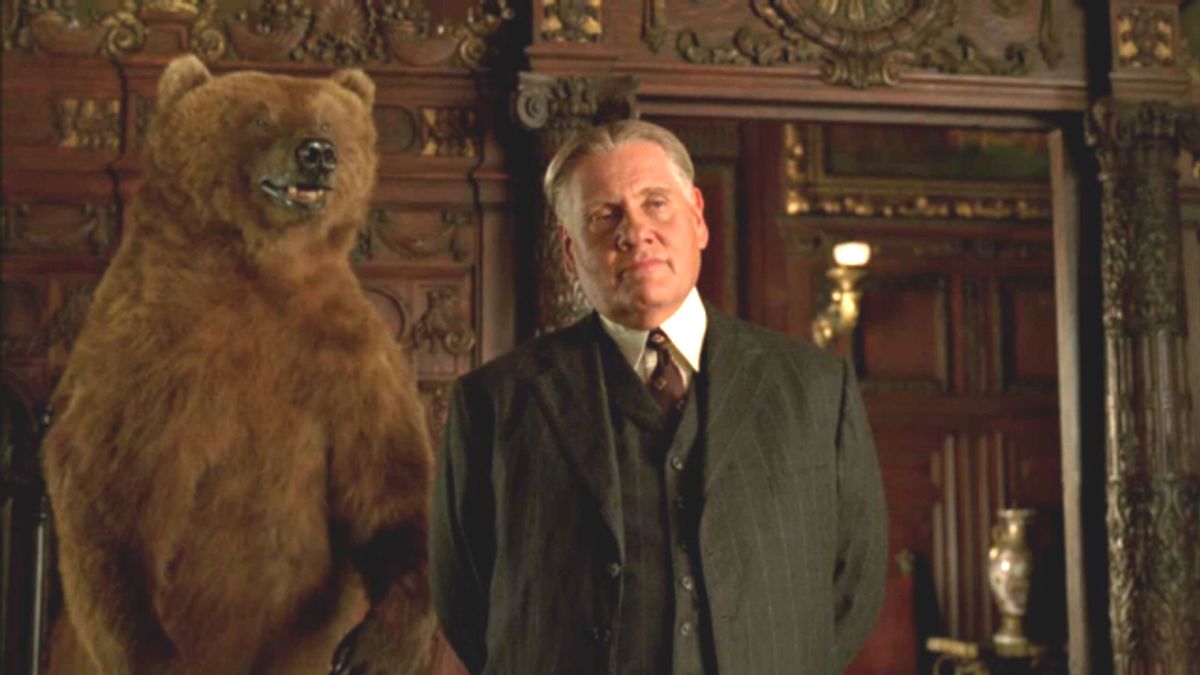 The following article contains spoilers for "Boardwalk Episode" season two, episode eight, "Two Boats and a Lifeguard." Read at your own risk.

"Powerful" episodes of cable dramas make a huge impression on viewers, and are often acclaimed as the best of their season. Sometimes the praise is deserved; other times it's a reaction to the sight of characters we like being diagnosed with fatal illnesses, beaten, raped, killed, etc.  Meanwhile, low-key but complex episodes often get short shrift from critics and viewers. I hope that doesn't happen with tonight's "Boardwalk Empire" episode, "Two Boats and a Lifeguard," because in degree of difficulty, it's impressive, in some ways extraordinary.

As written by Terence Winter and directed by Tim Van Patten -- a dynamic duo on a lot of great "Sopranos" episodes -- "Two Boats and a Lifeguard" seems like just a  "housekeeping" episode that's mainly concerned with wrangling subplots and exploring characters. But as I'll explain in a moment, the episode went way beyond that.

Nucky and Eli buried their father and had an uncomfortable moment of almost-reconciliation at the memorial. (This episode marked the final appearance of the late stage and screen actor Tom Aldredge, who played both Nucky and Eli's dad and Carmela's father on "The Sopranos.") Nucky responded to his dad's death -- the psychological aftershock of the second assassination attempt against him, this one set up by his surrogate son Jimmy Darmody -- by declaring that he was quitting his job as Atlantic City treasurer and was going to try to mend his ways and become a respectable citizen. (Fat chance of that happening on a show like this, but it was still a fascinating development that let star Steve Buscemi show us intriguing new shadings.) Nucky even asked Margaret's son to address him as "Dad" rather than "Uncle Nucky" -- a huge step toward commitment and emotional availability, even though it was conveyed in a rigid 19th century manner. Van Alden hired a nanny to take care of his baby with Lucy, in the process confirming his near-total inability to respond to the child as a father should, but revealing very faint glimmerings of potential near the end. (Or was that just wishful thinking on my part? Probably so -- Van Alden is such a rancid sour persimmon -- and so encrusted with lame graphic novel pathology, from religious fanaticism to sexual hypocrisy to cold sadism and murderous rage -- that the writers might be unable to salvage him as a workable character.)

Jimmy had to face up to his ambivalence about his new role as the city's supreme power broker, but he seemed to reject any misgivings at the end (another denial?) when he ceremoniously tossed Mickey Doyle, the Salacious Crumb of "Boardwalk," off a balcony. Jimmy's wife Angela met a bohemian woman at the beach, attended a party at her invitation at which she was able to be herself without fear of censure for the first time. She also had an unexpectedly direct conversation with Jimmy during which Jimmy admitted the depth of his criminality and his role in Nucky's attempted assassination, and Angela admitted that their marriage was a sham and prodded Jimmy toward admitting it, too.

A lot happened in this episode, and much of it could be filed under the heading, "Faking it." Characters who were in denial about one or more aspects of their lives had to face up to reality, then either engage it directly or flee. At the same time, though, there was a confidence and mysteriousness to ''Two Boats and a Lifeguard" that transcended all the detail work.

Nucky's recurring (and evolving) dream sequence -- the son showing his Nucky-like stigmata, the admonition "Daddy eats first," the moaning deer on the floor -- reminded me of some of the more vexing dream-driven episodes of "The Sopranos" and "Twin Peaks." The images had the inscrutable deadpan quality that I associate with some of my own dreams. Everything felt real and yet not real. The symbols announced themselves brazenly and seemed simple and obvious, but were presented with so drily that we we were not totally sure how to take them. They can in fact be interpreted in different ways, and applied to different characters and scenes.

This isn't just true of Nucky's dreams, but of particular anecdotes and lines that occur elsewhere in "Two Boats and a Lifeguard."

There's an ongoing theme that pits peoples' self-serving or self-denying image of themselves against the way others perceive them -- a contrast that poses an either/or conundrum, as in, "Are you X or are you Y?" Of course the answer here, as in life, is almost always "Neither .. and both," humans being such complex mammals. This was movingly confirmed at the end of the memorial, when Nucky, who professed to hate his father without remorse or even a second thought, noticed that one of the old man's bootlaces was untied, moved to tie it, and broke down in tears.

But the posing of these "X or Y?" questions is still important because it forces people to reflect on themselves, and prompts the viewer to reflect on the characters. Consider Nucky's opening rejoinder to the elevator operator who mentions the Jack Dempsey fight: "That fight hasn't happened yet." The elevator operator's line referred (within the dream) to the actual Dempsey fight, which has not yet happened in the show. But it could also refer to the struggle between Nucky and Jimmy for control of Atlantic City (which achieved a kind of resolution, however temporary, in this episode) as well as to the psychological/emotional struggles happening within Nucky, Jimmy, Angela, Van Alden and other characters.

Consider also Nucky's joke about the drowning man and God -- a joke whose punchline provides the episode with its title. God sent the drowning man obvious signs -- and actual help! -- throughout his awful experience, but he was too dense to recognize them. Nucky himself has been repeatedly "rescued" from certain death as if by a higher power, but rather than interpret these rescues as a signal that he ought to thank God, renounce evil and change his ways, he's continued on as if nothing happened. In this respect, Nucky is gradually turning into a classier Tony Soprano, a gangster who is dimly aware of a world beyond the one we can see -- a maybe-spiritual world, a world of symbols and fate, equations and second chances -- but then either fails to properly interpret the signs, or else interprets them correctly and changes his ways only to revert to the status quo. Nucky has interpreted the signs correctly in this episode -- there are even on-the-nose moments, such as his calling his hand wound "stigmata", which likens Nucky to the risen Christ-- but will he really do anything with them? Does he have that kind of insight, that kind of discipline? Or not? (I personally think Margaret could be Nucky's God, or savior -- a possibility that was hinted as early as episode four of Season 1, "Anatasia.")

Other literary/visual equations were made in the episode, via moments where characters insisted that one thing was really something else, or that a situation or image they thought meant "X" actually meant "Y." Nucky's interrogation by the feds combined an "Are you X or are you Y?" question and a stark moment of denial. Likened by his interrogator to an onion, Nucky replied, "I prefer to think of myself as an artichoke." (I love that response; artichokes are a hell of a lot tougher than onions.) In a late scene in which somebody read about Nucky's exit in the newspaper, we got another "this equals that" line: "'Beleaguered' -- that's French for completely fucked."The dream phrase "Daddy eats first" relates directly to Nucky's relationship with his father; but as my colleague Edward Copeland alludes, it also sums up the essential power dynamic of gangsterism, in which tribute must always be paid upward before the person who collected the money (or bagged the deer) can take his cut.  In the scene at the boardwalk food stand, Van Alden asked an underling to distinguish between "evil in and of itself" and an action "prohibited as wrong, as dictated by statute." His man replied, "When I first joined the bureau, I was convinced what we were doing was right. But after a while, seeing as how it was harder and harder to enforce the law...." Then he paused, uncertain whether to continue. "We should be going," Van Alden muttered, not ready to hear the rest of the sentence.

What, precisely, was meant by that image of the child's baseball glove in the chair? I don't think it was intended precisely at all,  and that's why it resonated. A friend described it as a "Rosebud"-like emblem of the "normal" childhood that Nucky -- who said goodbye to his cold and cruel dad in this episode -- never had. I saw it as a sidelong reference to a much-quoted passage from Corinthians, "When I was a child, I spake as a child, I felt as a child, I thought as a child: but when I became a man, I put away childish things" -- which dovetails with Nucky getting out of harm's way and formalizing his relationships with Margaret and her kids. (This interpretation also syncs up with Jimmy's subplot, parts of which dealt with Jimmy's frustration at being treated like a child and addressed as "boychik" by Philadelphia gangster Manny Horvitz.) But you could also point out that the baseball glove mirrors that closeup in the memorial scene of the elder Thompson's hand -- rosary beads place over the spot where the bullet penetrated Nucky's hand. And you could take it other ways, too -- just as you could apply Manny's story of the hunter hiring somebody to kill a deer for him as a direct slap at Jimmy's murder by proxy ("You hid behind poppa as he pulled the trigger"), and also every other gangster character's use of henchmen to do their actual dirty work.

The deer anecdote -- first told by Manny, with the Commodore's stuffed grizzly looming behind him -- was forcibly wedded to Nucky's story near the end of the chapter, in the scene in which Nucky went to his enemies and told them they'd won and that he was backing down. Nucky delivered the statement while standing beside the same bear. I was tempted to call this shot excessive and obvious, but in retrospect it's only because of Nucky's weak dialogue, which came across like placeholder language that was meant to be filled in later with something good ("My father's death and my recent brush with the same have got me to thinking...", "I have the love of a fine woman and the love of her two wonderful children", etc). The similarity in posture between Nucky and the bear -- and the suggestion that he was on the verge of becoming another trophy in the Commodore's collection -- was perversely funny, the kind of touch that David Lynch or David Chase might have slipped into an otherwise straightforward scene. Like the better moments on "Boardwalk Empire," it was at once direct and subtle, funny and sick, and you could take it however you liked.