On the eve of destruction

Before cops broke up Occupy Oakland, the debate over nonviolence was already unraveling the movement 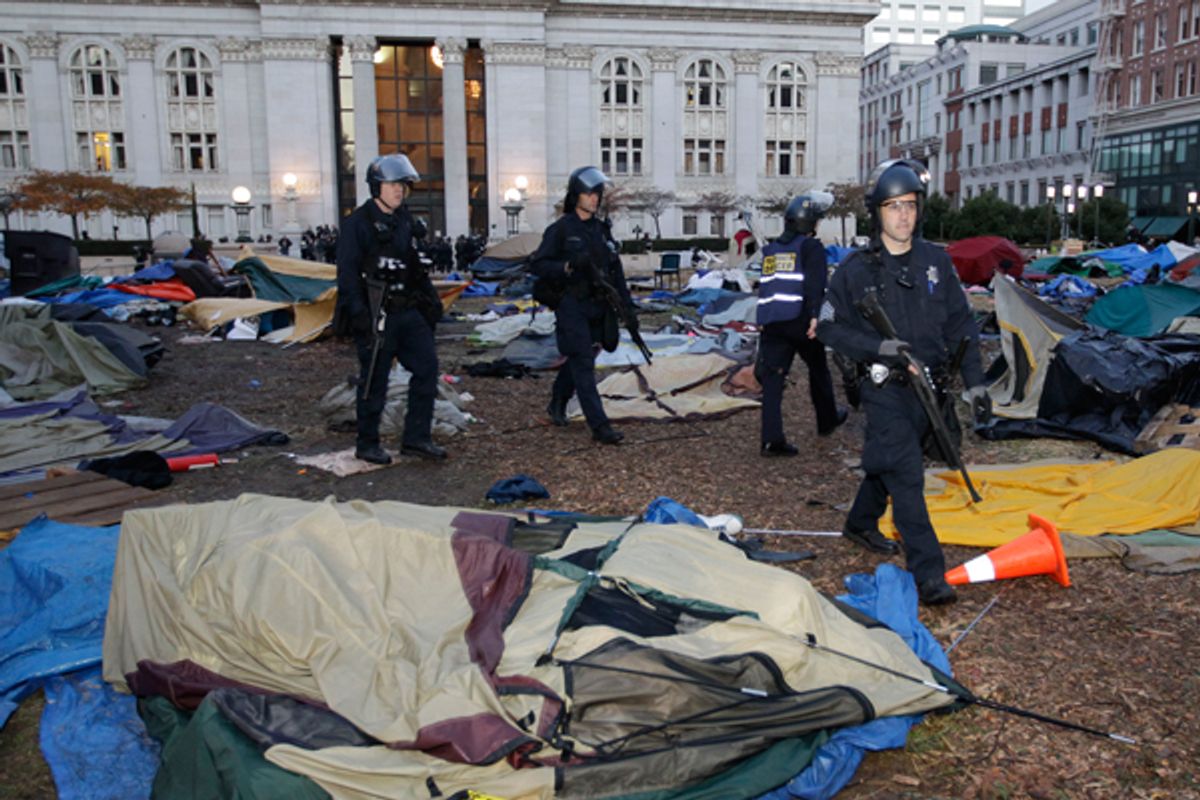 Without tear gas or rubber bullets this time, police broke up the Occupy Oakland encampment in the hours before dawn Monday morning. City officials served a fourth eviction notice Sunday evening, after a murder at the camp's borders Thursday night validated worries about crime and safety even among some camp supporters. Some Occupy Oakland leaders insisted the victim had nothing to do with the protest, but once police announced Sunday night that the 25-year-old man, Kayode Ola Foster, had been camping there, and so had at least one of the suspects, it seemed it could only be a matter of hours before cops moved in to close the camp. And it was – about seven hours, to be exact. Most of the crowd dispersed peacefully; 32 people were arrested.

I made my first trip to Occupy Oakland midday Sunday, and I wasn't going to write about it without returning, because the movement is too complicated for a drive-by report. Several people I admire, including Alternet's Joshua Holland, have been doing day-in, day-out shoe-leather reporting. But now that Foster and at least one murder suspect have been tied to the camp, and now that it's gone, at least in its present form, I'm going to try to make sense of what I saw.

First, let me lay out my bias: I have an absolute commitment to nonviolence in social movements, for moral, tactical, strategic and political reasons. And I include most forms of property destruction as violence (though there's disagreement about that) because people get hurt, even killed, however inadvertently, when "revolutionaries" start breaking windows and torching the symbols of oppression. Meanwhile, the righteous destroyers of property make themselves judge and jury, deciding whose property deserves to be trashed. So for me, from a distance, once Occupy Oakland refused to condemn those who advocated and practiced vandalism and violence last week, it began to lose its moral and political power.

What I saw Sunday afternoon didn't reassure me. The debate over nonviolence had polarized the camp, and the protesters who wanted Occupy Oakland to distance itself from vandalism and worse were themselves becoming pariahs. The minute I arrived, I stumbled into a heated small group meeting about planning a Nov. 19 march with labor unions, where one loud, angry faction was trying to eject a union activist because he had allegedly worked with Mayor Jean Quan's husband on a community organizing project, and had continued to be a vocal proponent of officially condemning violence and vandalism. In the middle of the meeting the group announced it was closed to media and tried to eject a KGO-radio reporter, rather ingeniously, by humming a jazzy tune I didn't recognize a cappella into his microphone so he couldn't record their deliberations. The reporter wandered away, and I did too.

When I circled back later, the motion to eject the union activist had failed -- but the angry losing faction left the meeting. Then the union activist departed too, after someone politely asked him to leave. At that point fewer than half the original participants remained to plan the march with labor. The energy for the project had dissipated thanks to an effort to narrow the movement, not widen it. That seemed to symbolize a larger trend at the embattled encampment.

Later that night, after I left, I watched on the Web as the general assembly debated a proposal to endorse a vague "diversity of tactics" – understood to include property destruction and possibly other forms of violence, though that deliberately wasn't specified  -- while also forbidding members who support strict nonviolence from denouncing those other "tactics" to the media. It should be stated that not all of the "diversity of tactics" supporters favor violence or vandalism; many objected to the efforts of city officials, law enforcement (and probably liberals like me) to narrow the movement by demanding that it cast out those who support destructive "tactics." On the other hand, several speakers who opposed the measure argued that the movement should be more concerned about attracting a "diversity of supporters" than endorsing a "diversity of tactics," noting that violence has historically cost social movements broad support. Many people also opposed the measure's attempt to limit what individual occupiers could say to the media, seeing it as a bizarre restriction on free speech in a movement committed to freedom of expression and protest.

In the end, the measure won 60 percent of the general assembly's 250-plus votes, but since the camp's consensus rules require 90 percent support, it technically failed. Still, though it didn't become official Occupy Oakland policy, it reflected the opinion of a solid majority in attendance. I saw the same dynamic in the general assembly debate that I'd witnessed in the small group Sunday afternoon: In the name of "tolerance" for those who wanted to deviate from nonviolence, people were preaching and practicing intolerance for those who support nonviolence.

There was still positive energy at Occupy Oakland – a children's circle, an interfaith tent, a library, an herbal medicine table and an "Open Cathedral" group holding an outdoor Sunday service along the eastern wall of the plaza. Friendly, energetic volunteers continued to staff the kitchen and serve food to whoever showed up. "Get your antioxidants," a young woman shouted, as she put a crate of pomegranates on the food table. A man in a 14thStreet treehouse labeled "Ohlone Land" promised to outlast a police raid, since he'd already technically vacated the plaza --  and by all accounts he did, at least through Monday morning.

But there was an uneasy edge at Occupy Oakland, too. Young men with black face-masks, a symbol of support for the disruptive "black bloc" faction that's been behind most of the destruction, roamed the park on bicycles and on foot. I saw a lot of homeless people, some apparently struggling with drug or alcohol or mental health issues. I witnessed two fights involving the same emaciated woman in a hot pink sweat shirt. First she swung a crutch (not her own) at another occupier and missed before being subdued; later she got in a furious shouting match with another woman, but a few men separated them before they came to blows. Then they let the woman go, and she slipped back into the crowd again.

In Oakland, as in other cities, the camps have become magnets for the symptoms of the social injustice they're protesting: homelessness, drugs, mental illness and crime. Dreamers and do-gooders in the groups genuinely believe the movement has to help society's victims as it tries to change the world. Some think that's part of creating the alternate society that is going to gradually annex the rest of us.  I admire those people, but I think the shameful problems of our larger society will capsize this movement if it attempts to solve them on its own, rather than channeling energy into changing a political structure that creates and ignores these human tragedies. Meanwhile, the more the camps attract troubled and violent people, the more they alienate the vast majority of the 99 percent the Occupy movement is trying to speak for, and leave those comfortable with violence and disorder in control.

The most directly relevant social problem that Occupy Oakland rightly wants to challenge is police lawlessness, a scandal that reaches back to the days when the city was run by white Republicans – but that has persisted through the eras of black mayors, liberal white mayors and now a progressive Asian American mayor, Jean Quan, who is herself a veteran of 1960s protests. The Oakland Police Department is still under court supervision after a gang of corrupt officers known as the Oakland Riders preyed on the city's low-income communities for years. The violence police used in rousting the encampment Oct. 25 proved to a lot of Oakland residents that cops are still not entirely under the control of city officials.

But Occupy Oakland can't fight police violence with violence. The movement's high point may have been the Nov. 2 general strike, which grew out of mass revulsion at the police tactics used to tear down the camp the week before. At least 10,000 people joined a day-long peaceful protest that culminated in closing down the Port of Oakland, with the support of the traditionally radical longshoremen's union.  But the movement began sliding downhill the same day, first when splinter groups broke windows and vandalized storefronts during the peaceful march, despite efforts by the vast majority of protesters to either stop or discourage the violence. Then that night about 200 people broke into and occupied a downtown building, inviting new clashes with cops. Videos showed members of the violent faction even attacking other Occupy Oakland supporters, and some fervent occupiers began to claim that the violence was coming from outsiders unaffiliated with the Occupy movement.

That said, once the larger movement refused to condemn the violence and commit the occupation to peaceful protest, the momentum it gained began to subside. Some in the nonviolent faction began moving their tents to nearby Snow Park, which has yet to be torn down but probably will be. That tended to leave behind those more comfortable with destructive tactics. And while occupiers are right that the city and police made a much bigger deal of Kayode Foster's murder than they do about most killings of young black men in Oakland, the fact is, the only occupier to die just happened to be a young black man, reportedly at the hands of two other young black men. Trying to combat the larger social ills it was protesting, Occupy Oakland began to be engulfed by them.

Occupiers will gather at the Oakland Public Library later Monday to plan their next steps. I'm hoping they find a new way to channel the transformative energy the movement generated.